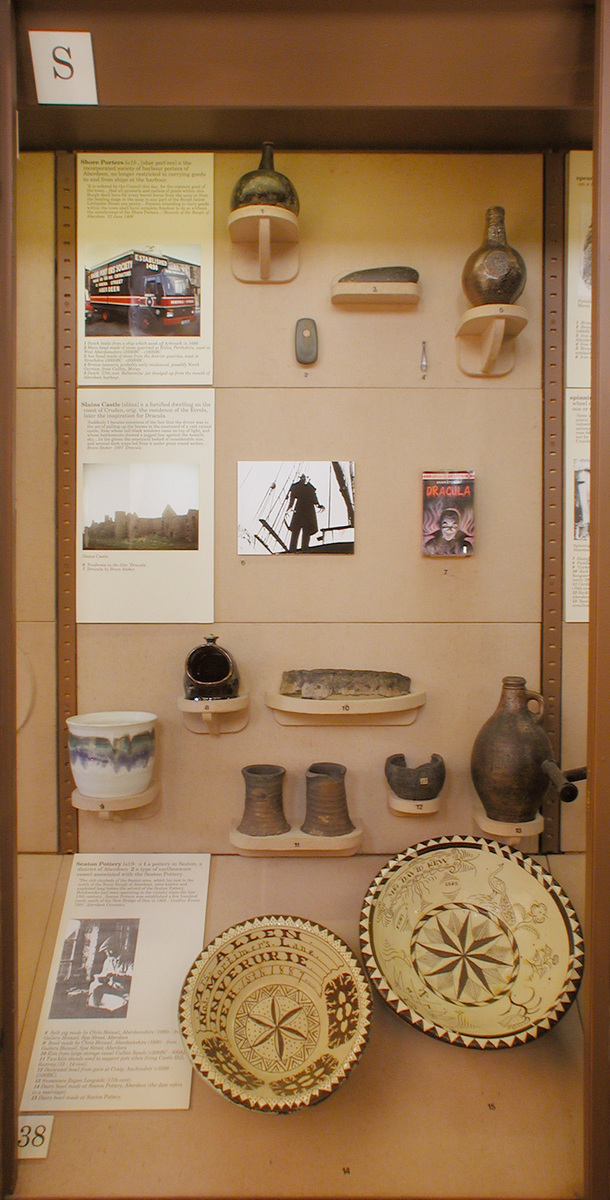 Seaton Pottery la19-
1 n A pottery in Seaton, a district of Aberdeen
2 n A type of earthenware vessel associated with the Seaton Pottery.

The rich claybeds of the Seaton area, which lay just to the north of the Royal Burgh of Aberdeen, were known and exploited long before the advent of the Seaton Pottery. Brickworks had been operating in the vicinity since the late 18th century Seaton Pottery was established a few hundred yards south of the New Bridge of Don in 1868..
Godfrey Evans 1981 Aberdeen Ceramics.

Shore Porters la15-
The incorporated society of harbour porters of Aberdeen, no longer restricted to carrying goods to and from ships at the harbour.

It is ordered by the Council this day, for the common good of the town.that all pynouris and carters of goods within this Burgh shall have for every barrel borne from the quay or from the landing stage at the quay to any part of the Burgh below Littlejohn Street one penny.Persons intending to carry goods within the town shall have complete freedom to do so without the interference of the Shore Porters.
Records of the Burgh of Aberdeen 22 June 1498

Slains Castle
A fortified dwelling on the coast of Cruden, orig the residence of the Errols, later the inspiration for Dracula.

Suddenly I became conscious of the fact that the driver was in the act of pulling up the horses in the courtyard of a vast ruined castle, from whose tall black windows came no ray of light, and whose battlements showed a jagged line against the moonlit sky.In the gloom the courtyard looked of considerable size, and several dark ways led from it under great round arches
Bram Stoker 1897 Dracula

Dairy bowl made at Seaton Pottery, Aberdeen (the date refers to a marriage).

Dutch 17th cent 'Bellarmine' jar dredged up from the mouth of Aberdeen harbour.

Axe-head made of stone from the Antrim quarries, used in Strathdon c3000BC - c2000BC.

Dutch bottle from a ship which sank off Arbroath in 1689.