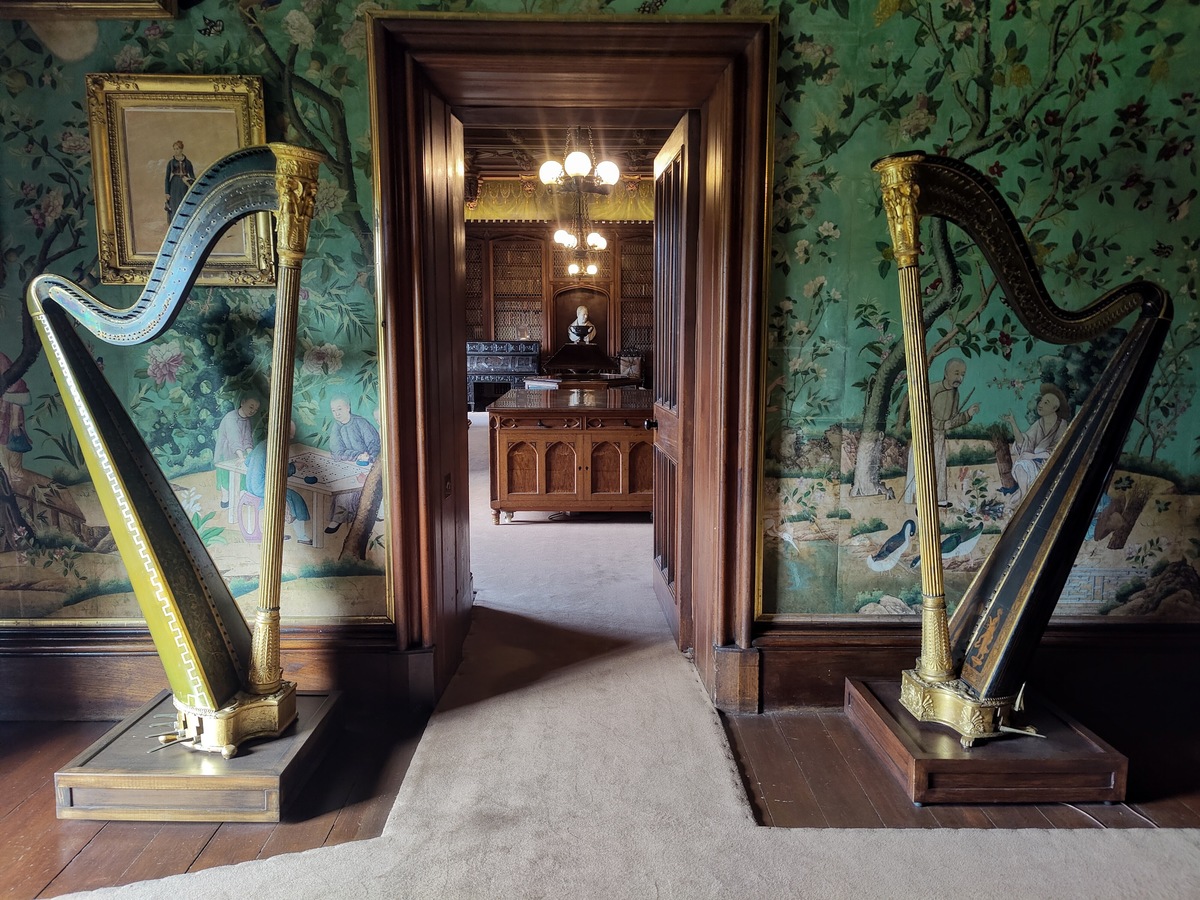 Sophia, Scott's eldest daughter, was an accomplished harpist. Two harps associated with the Scott family can still be seen at Abbotsford.

When they had finished work and eaten dinner, people of Walter Scott’s era needed a form of home entertainment. Gathering to sing songs – including songs by Scott – was one such form.

His songs were often adapted for harp and piano and printed as song sheets for this purpose. The most famous example of this is probably ‘Ave Maria’, which is based on ‘Hymn to the Virgin’, sung by Ellen, the ‘Lady’ of Scott’s 1810 poem The Lady of the Lake. The poem within a poem was set to music by Austrian composer Franz Schubert (1797-1828) in 1825, and was performed in concerts as well as being a popular piece to sing in the home.

Today, music inspired by Scott can be found everywhere: in pubs and folk music venues all over Scotland, Britain and beyond, in public life (including the United States presidential inauguration ceremony), in classical concerts and at the opera. The folk revival of the 1940s-60s drew on many forms of traditional music, including material gathered and written by Scott. These afterlives resonate in the present day in ways that may be very far detached from their original meanings.

Many people have grown up with Scott’s songs played or sung in their home, forming part of their childhood memories. Others have found his music an entry into Scottish culture. The love of performing music still delights people today, and the impulse to collect and share songs is still alive. 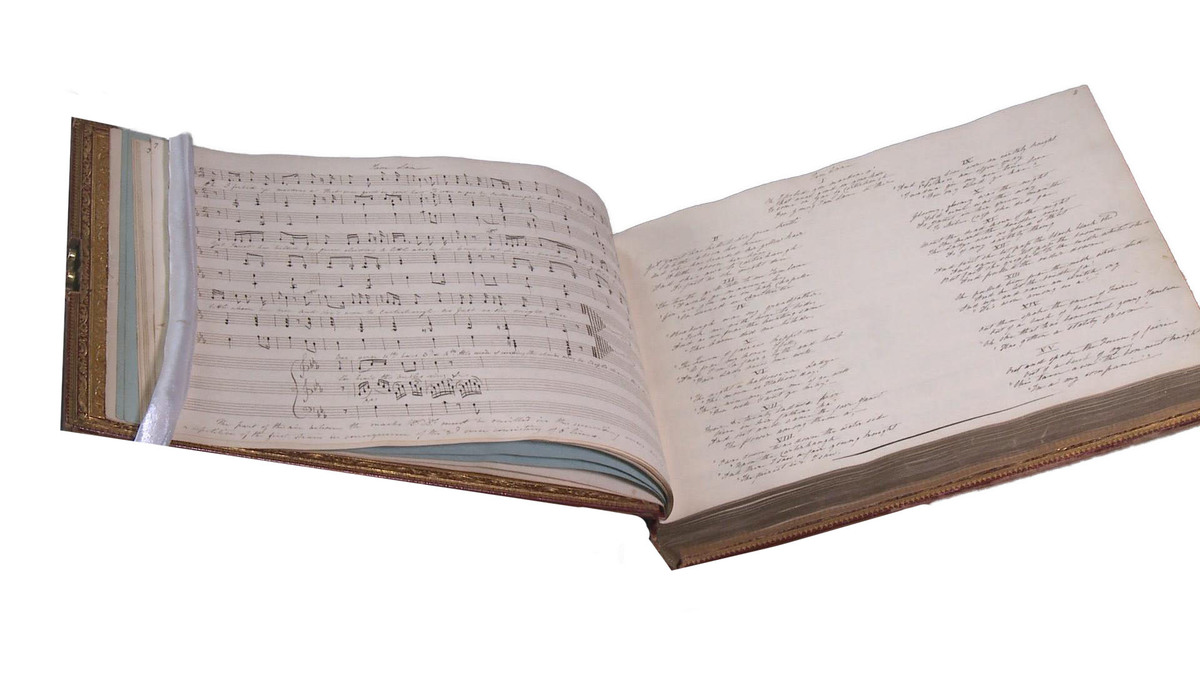 Scott's daughter, Sophia Lockhart, compiled her own collection of songs and ballads, with words and music written in her own hand. Many of the songs were traditional Scottish ballads, though some were songs her father had written for inclusion in his poems and novels. Scott took great pleasure in listening to his daughter sing and play these songs on the harp at Abbotsford. 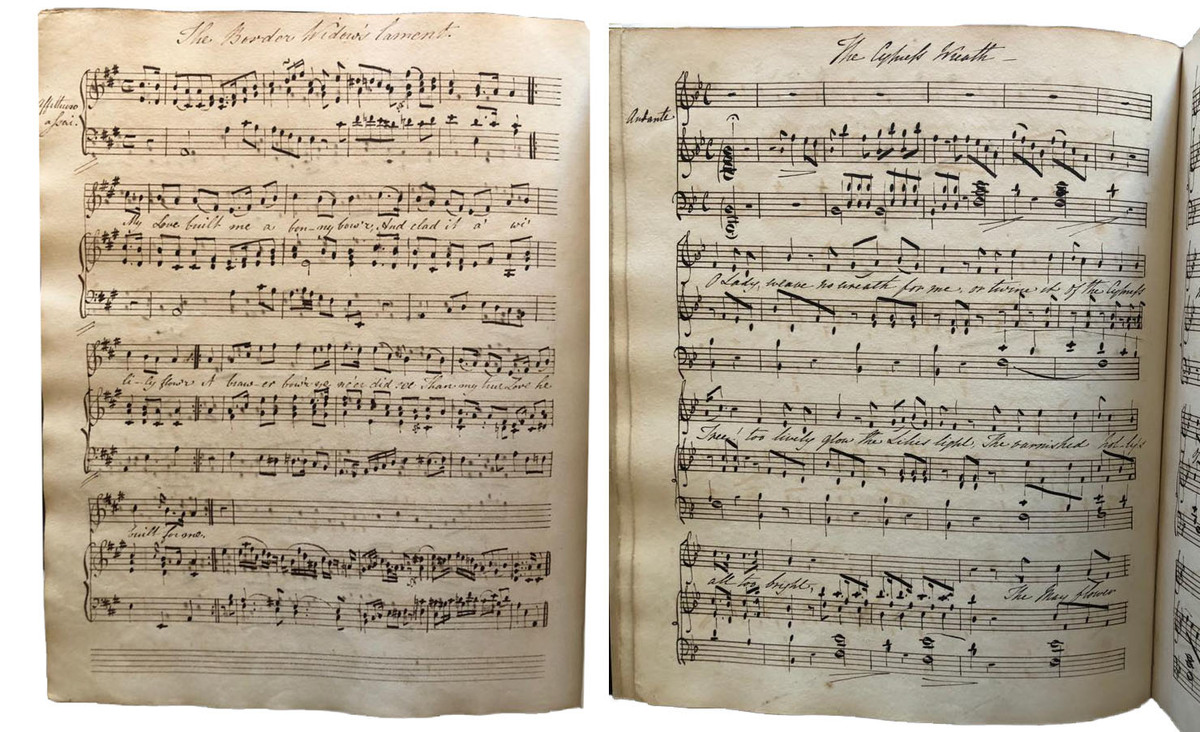 Jane Austen and her relations - like many other families in the 1800s - collected songs they liked and wrote down their scores to keep and sing from in future. Two songs by Walter Scott featured in the Austens' collection – ‘The Border Widow’s Lament’ and ‘The Cypress Wreath’. 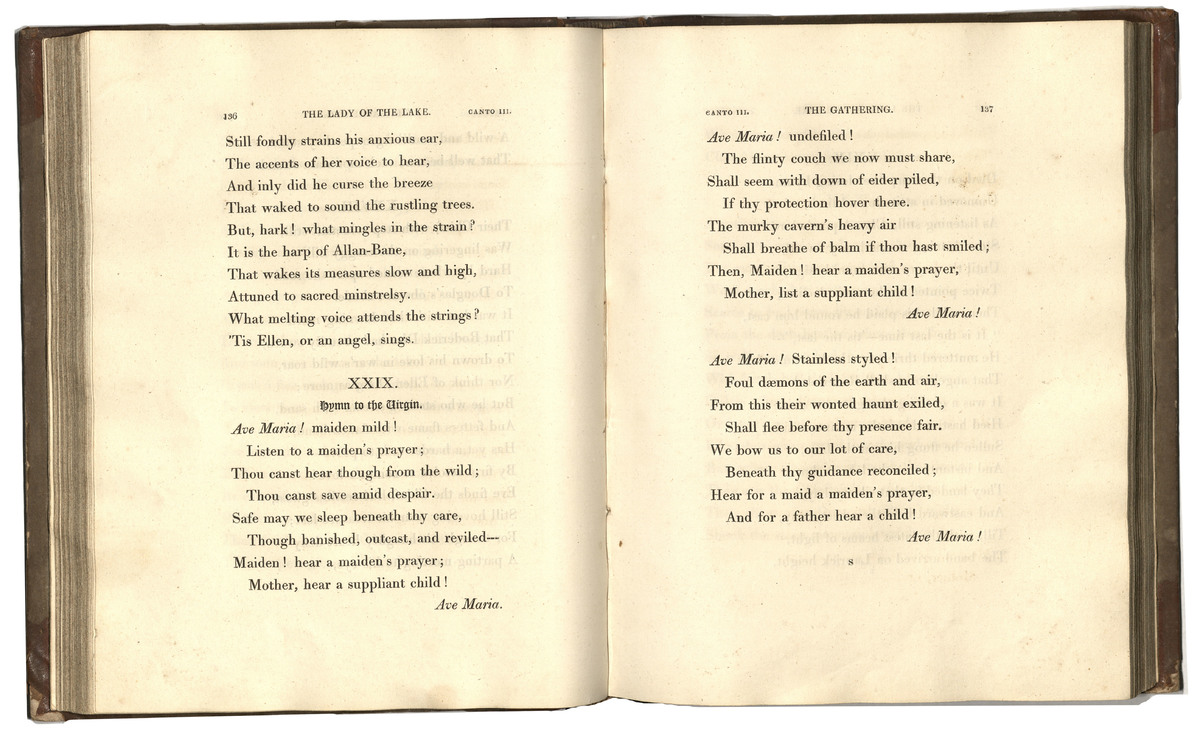 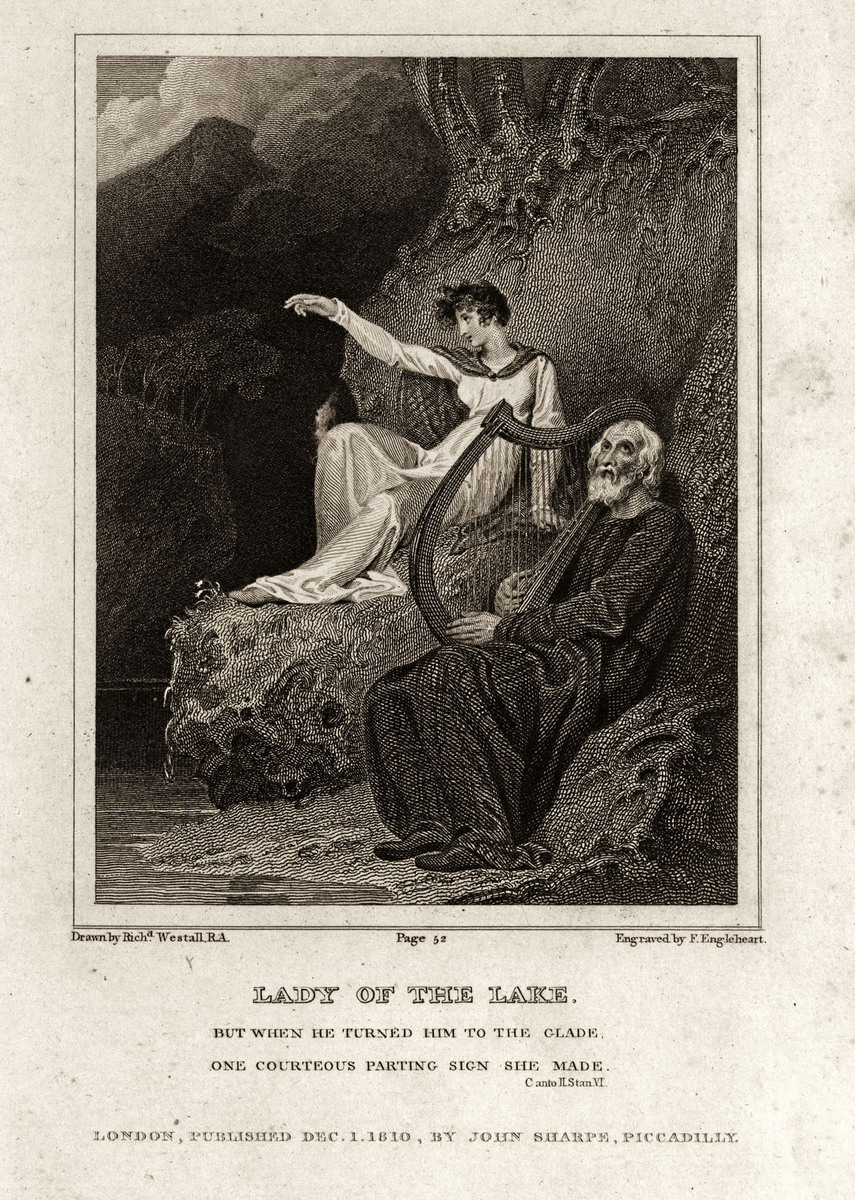 The Lady of the Lake
Walter Scott
1810

Today, it is much more common to hear the Latin prayer version of 'Ave Maria'. But originally, Schubert wrote the music for a German translation of the lyrics in Scott's poem, seen here.

The character of Ellen Douglas, accompanied by a harp, is singing a prayer to the Virgin Mary to ask her for help.

Caitlin Bell and Aden Mazur are Music students at the University of Aberdeen. 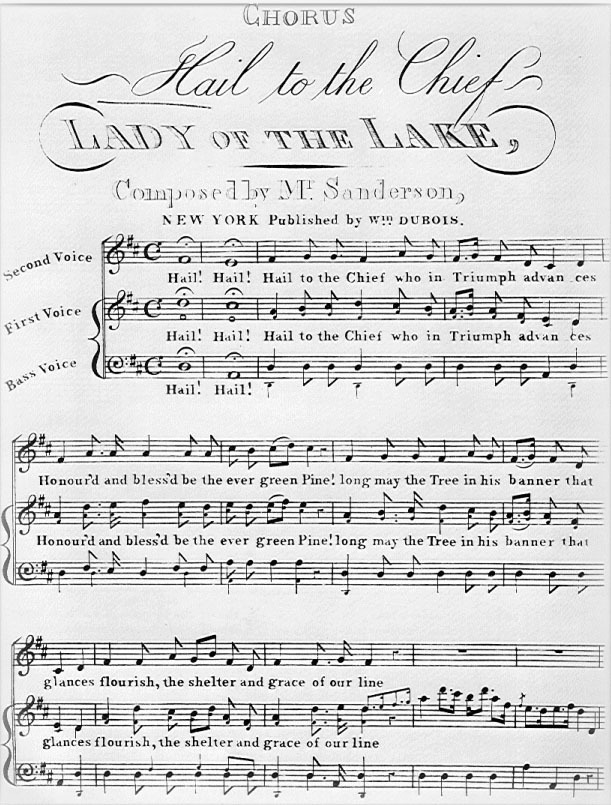 Also derived from The Lady of the Lake, Scott’s ‘Hail to the Chief’ is now the presidential anthem in the United States and is played by the U.S. Marine Band at inaugurations and on other occasions. The song had nothing to do with American politics originally; in Scott’s poem it is termed a ‘boat song’ and is sung in celebration of Scottish chieftain Roderick Dhu. This curious connection is an excellent example of the ways in which Scott’s poems took on a life of their own after publication. 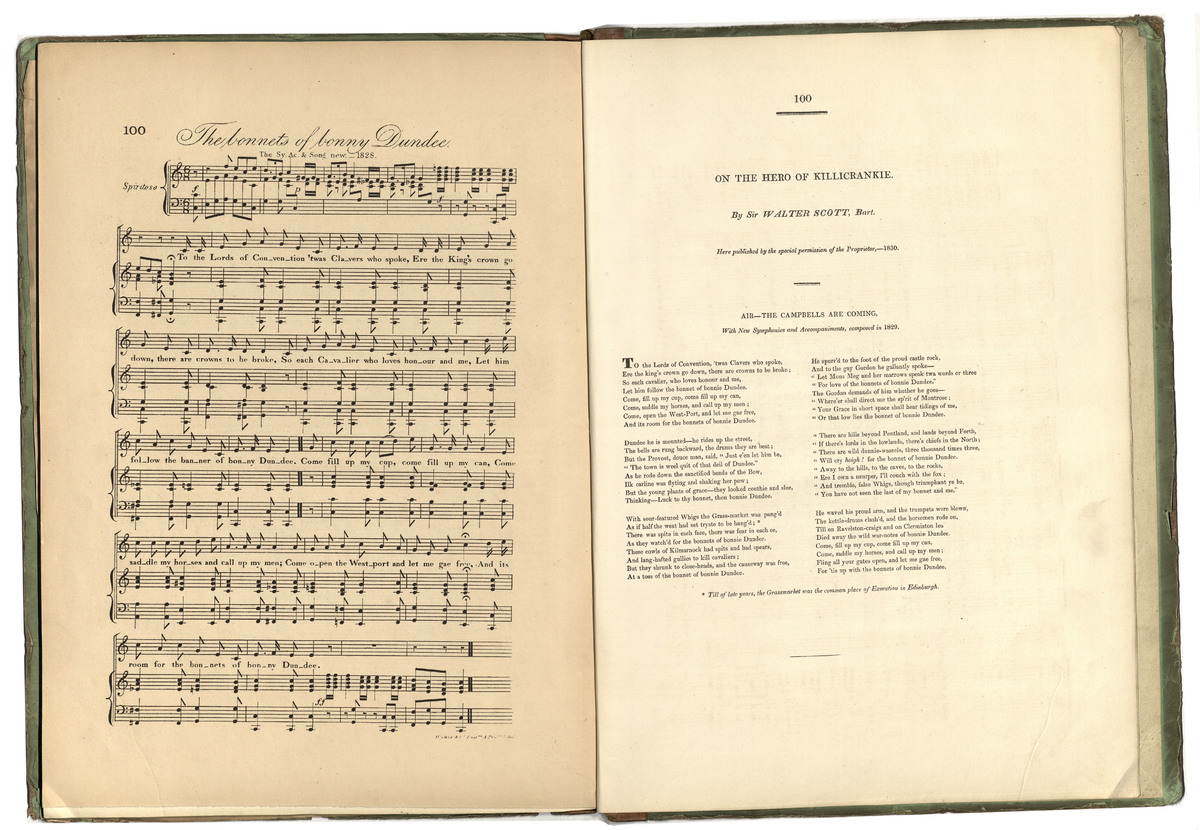 
'The Bonnets of Bonnie Dundee' is widely sung and enjoyed today. The three interpretations below all differ in musical style and mood. Listen and compare, or even sing along.

Saoirse McIntee is a fiddle player and Community Music student at the University of Aberdeen. In her take on 'Bonnie Dundee' she has chosen to perform it on the fiddle in two sections: as a slow air, and then as a jig, to capture the diversity of representation of this tune in Scottish instrumental music, and to show how widespread it is. It is also well known as a 6/8 march in a standard pipe band repertoire.

The Bonnets of Bonnie Dundee

This version of 'Bonnie Dundee' is edited, adapted and performed from a source in the Scott household by Dr Sally Garden. Sally is a musician and musicologist with a special interest in Scottish and Scandinavian art song. Here she restores ‘Bonnie Dundee’ to its original air by reconstructing a rare ‘setting’ of the song made (for piano or harp) by one of Scott’s close musical friends. 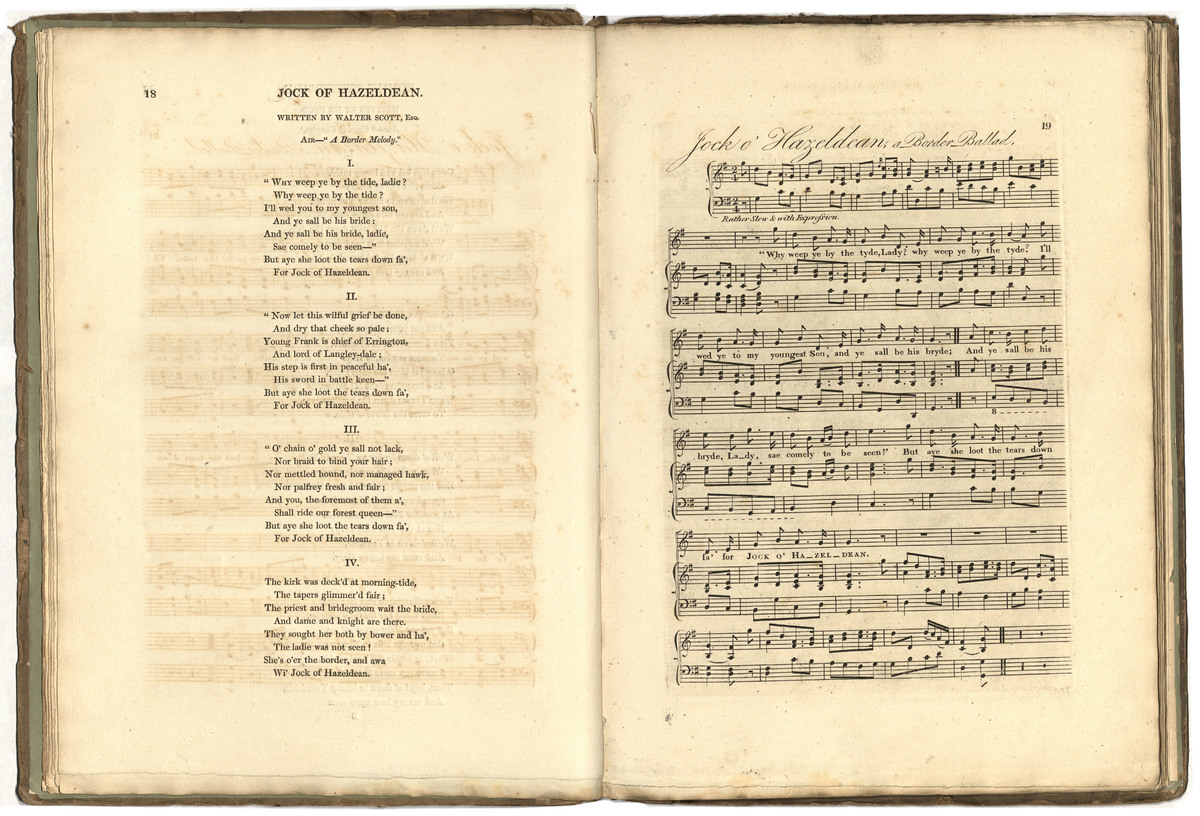 'Jock of Hazeldean' in Albyn’s Anthology, or, A Select Collection of the Melodies of Local Poetry
Alexander Campbell
1816

The musician and poet Alexander Campbell compiled a collection of Scottish songs entitled Albyn's Anthology. Campbell enlisted Scott, who was his former music student, to write seven songs for the collection. One of these was 'Jock of Hazeldean', which Scott had adapted from an earlier folksong called 'John of Hazelgreen'. The song is number 91 in the Edinburgh Edition of Walter Scott's Poetry.

Performed by the Polish-Scottish Song Group

The Polish-Scottish Song Group, hosted by the University of Aberdeen's Elphinstone Institute, was founded in 2011 to foster the exchange of culture by using song traditions to learn about each other. The group celebrated the 250th anniversary of Walter Scott’s birth with a virtual gathering of some of its members from Aberdeen, Finland, France and the USA.

They sang two songs, the first being Scott’s ‘Jock o Hazeldean’, which the group's leader Janice Clark chose because of its lovely melody, and because it is one of the few Scottish ballads to have a happy ending for the young couple.

They chose the second song, ‘Oj Chmielu’, because they thought it would be the type of song that the antiquarian Scott would have found intriguing. ‘Oj, Chmielu’ (‘Oh, hops’) is said to have the oldest known melody in Poland, and is associated with weddings and the feelings of loss experienced by the parents of the bride.

Scott often wrote that he did not understand music, noting in his journal in November 1825 ‘I do not know and cannot utter a note of music and complicated harmonies seem to me a babble of confused though pleasing sounds.’

For someone who claimed not to understand music, his words and ideas had a profound and lasting effect on the song and music tradition of the nineteenth century and beyond. The ballads he gathered were part of a living tradition and his collection of them ensured they were not forgotten. His own poems and novels inspired new songs and new ways of singing them. Often these songs have taken on cultural meanings and significance far beyond anything Scott could have imagined, but that too reminds us that song is part of an ongoing and evolving tradition.