Scott at the Opera

Walter Scott’s literary works have inspired 93 operas, more than those of any other writer apart from Shakespeare. This is perhaps unsurprising given Scott’s enormous success as a writer and poet.

While editing his ballad collection, Minstrelsy of the Scottish Border, Scott began to write original poems, including ballad imitations. His imitation of a medieval romance, The Lay of the Last Minstrel, was published in 1805 and launched his successful poetic career. In 1814 he turned to novel-writing and published Waverley, about the 1745 Jacobite uprising, which became one of the most widely read novels in Europe. 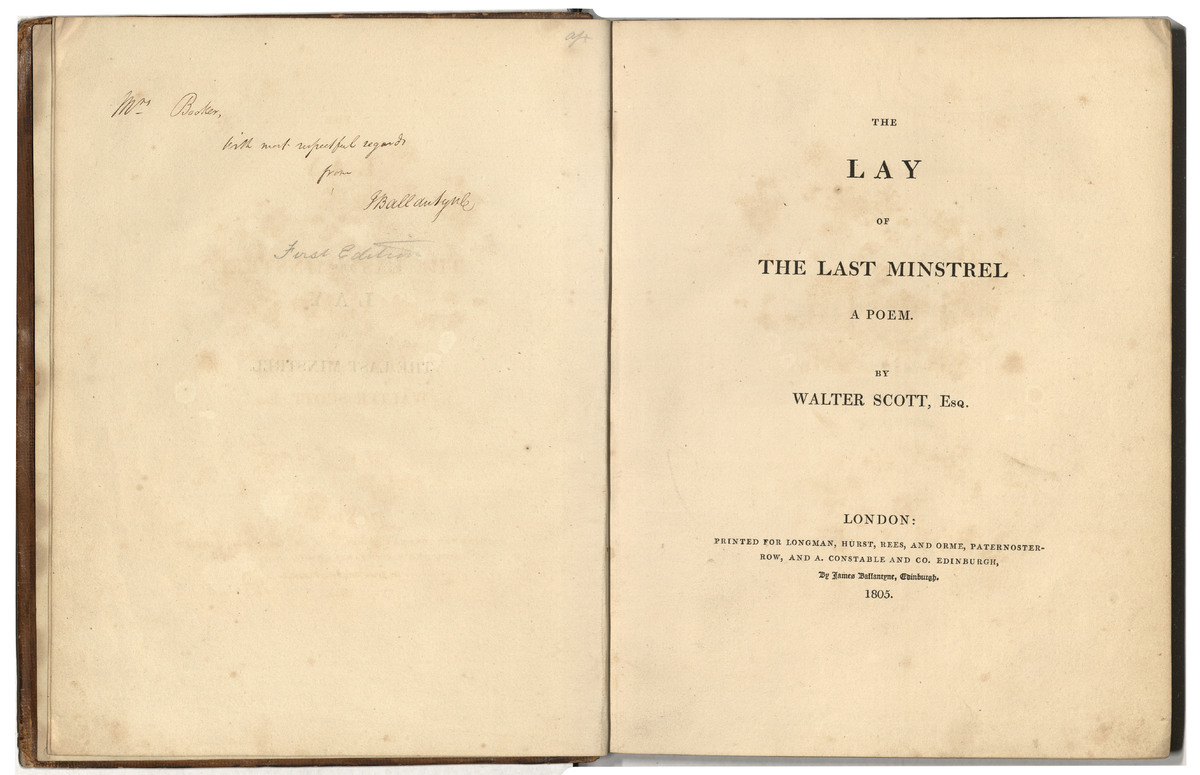 The Lay of the Last Minstrel
Walter Scott
1805

In 1805 Scott wrote his first long narrative poem, The Lay of the Last Minstrel. This innovative poem had the concept of the minstrel as storyteller and keeper of historical record at its heart and was met with popular and critical acclaim. It was to launch Scott's extraordinarily successful career as a poet and later as a novelist. 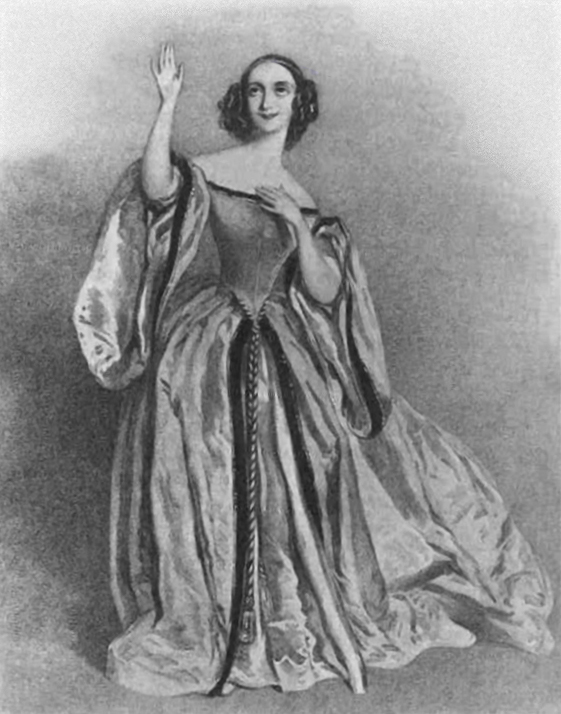 The dramatic images of Scottish stories and landscapes in Scott’s work appealed to the Romantic sensibilities of authors and musicians in many lands, and inspired adaptations in various genres, including opera.

One of the most enduring, Gaetano Donizetti’s Lucia di Lammermoor (1835), was based on Scott’s novel The Bride of Lammermoor (1819), which tells of a tragic love affair between two young people from feuding families, ending in the heroine’s madness and death.

Salvadore Cammarano, when writing the text for Lucia, relied on the simple, tragic love story at the heart of Scott’s novel, which in many ways resembled a traditional Scottish ballad. Premiering in Naples’ Teatro di San Carlo in 1835, Lucia remains an opera house staple today. 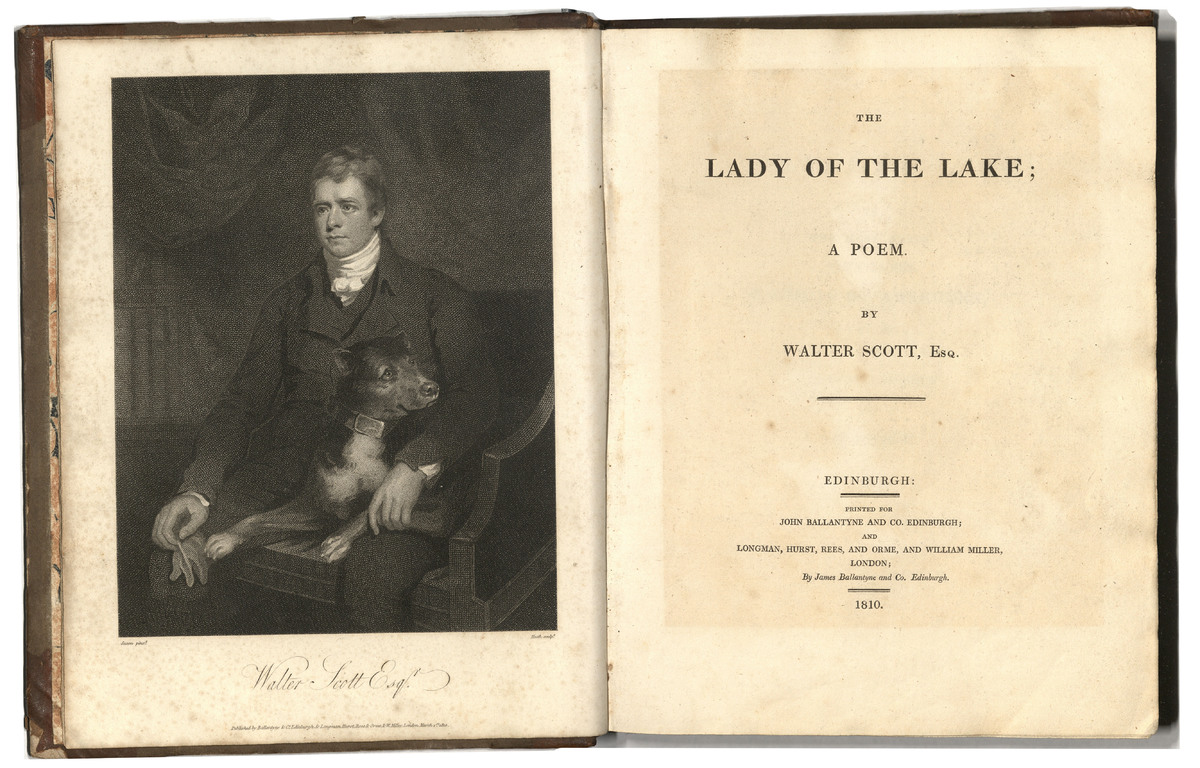 The Lady of the Lake
Walter Scott
1810

Scott’s third narrative poem The Lady of the Lake is set in the Trossachs and tourists flocked to the area to see the scenes described in it. It established Scott’s reputation as a European Romantic poet and was enormously influential. It inspired the Italian opera La donna del lago, the first opera to be based on Scott’s work.

This vocal score contains lyrics in both Italian and German. The librettist (the writer of the text of an opera), Andrea Leone Tottola, based the words on a French translation of Scott’s The Lady of the Lake. Rossini's and Tottola’s opera was written for the Teatro di San Carlo in Naples, Italy, where it premiered in 1819. 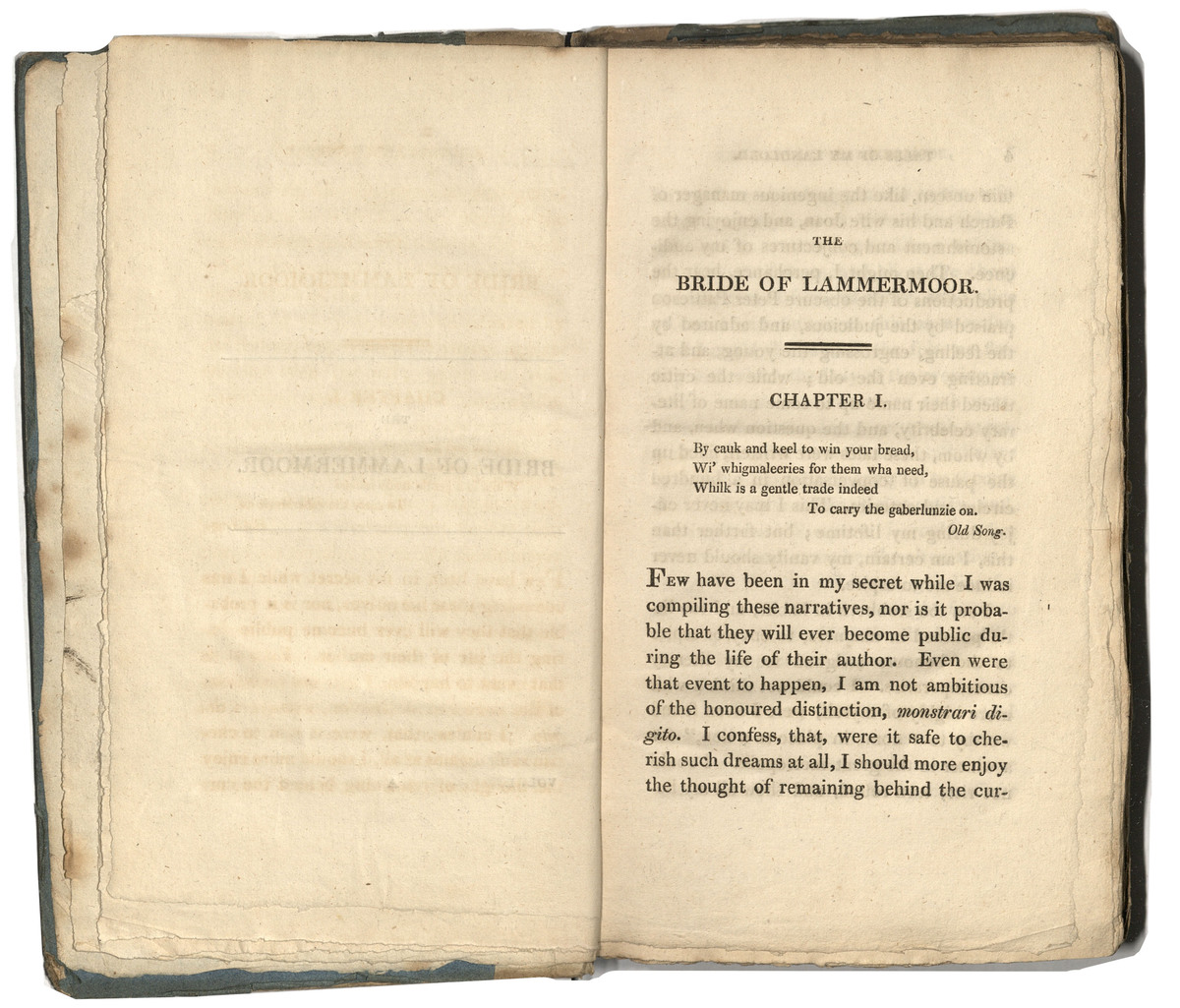 The Bride of Lammermoor
Walter Scott
1819

Scott published The Bride of Lammermoor and many of his works anonymously, partly because it might have been thought improper for someone of his status – as Sheriff-Depute of Selkirkshire – to write novels. But also, perhaps, to heighten mystery around the books and thus to increase sales. According to Scott, The Bride of Lammermoor was based on a true story. Gaetano Donizetti adapted it into Lucia di Lammermoor in 1835, when interest in Scottish history and culture was strong across Europe. 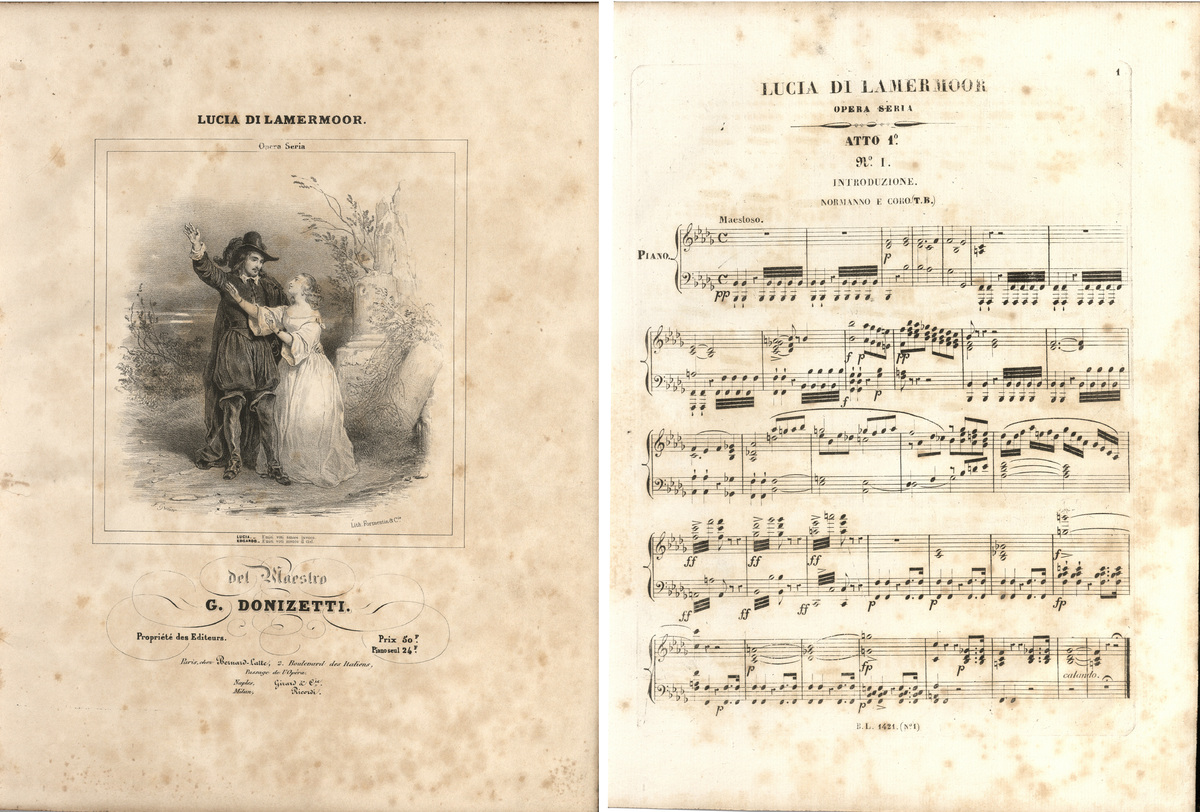 This vocal score for Lucia was published in Paris the year that the opera premiered in Naples. On the left can be seen an engraving depicting Lucia and her lover, Edgardo. To the right is the first page of the musical score, which is for the chorus and the character of Normanno - the Captain of the Guard for the Lammermoor family - to sing. 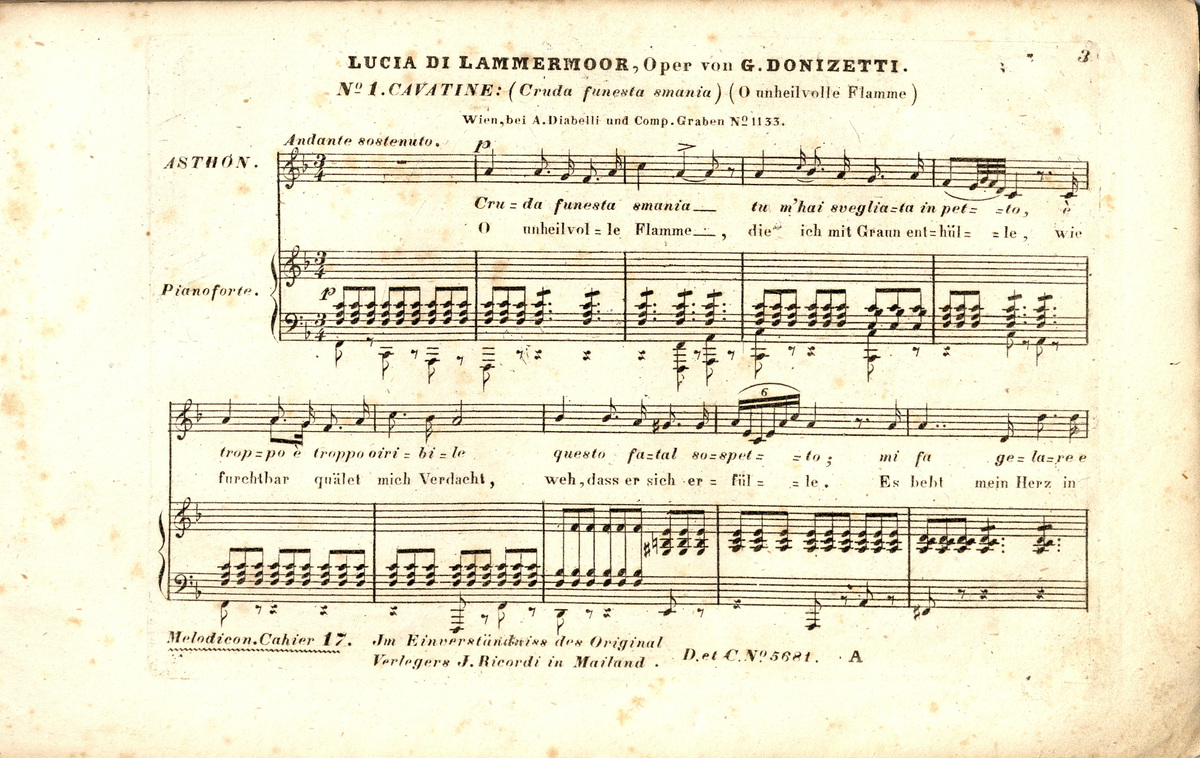 In this later vocal score, with lyrics in German and Italian, we can see an early section of the opera sung by the character of Enrico Ashton of Lammermoor. Ashton wishes his sister, Lucia, to marry the aristocrat Arturo Bucklaw, despite her love for Edgardo di Ravenswood. 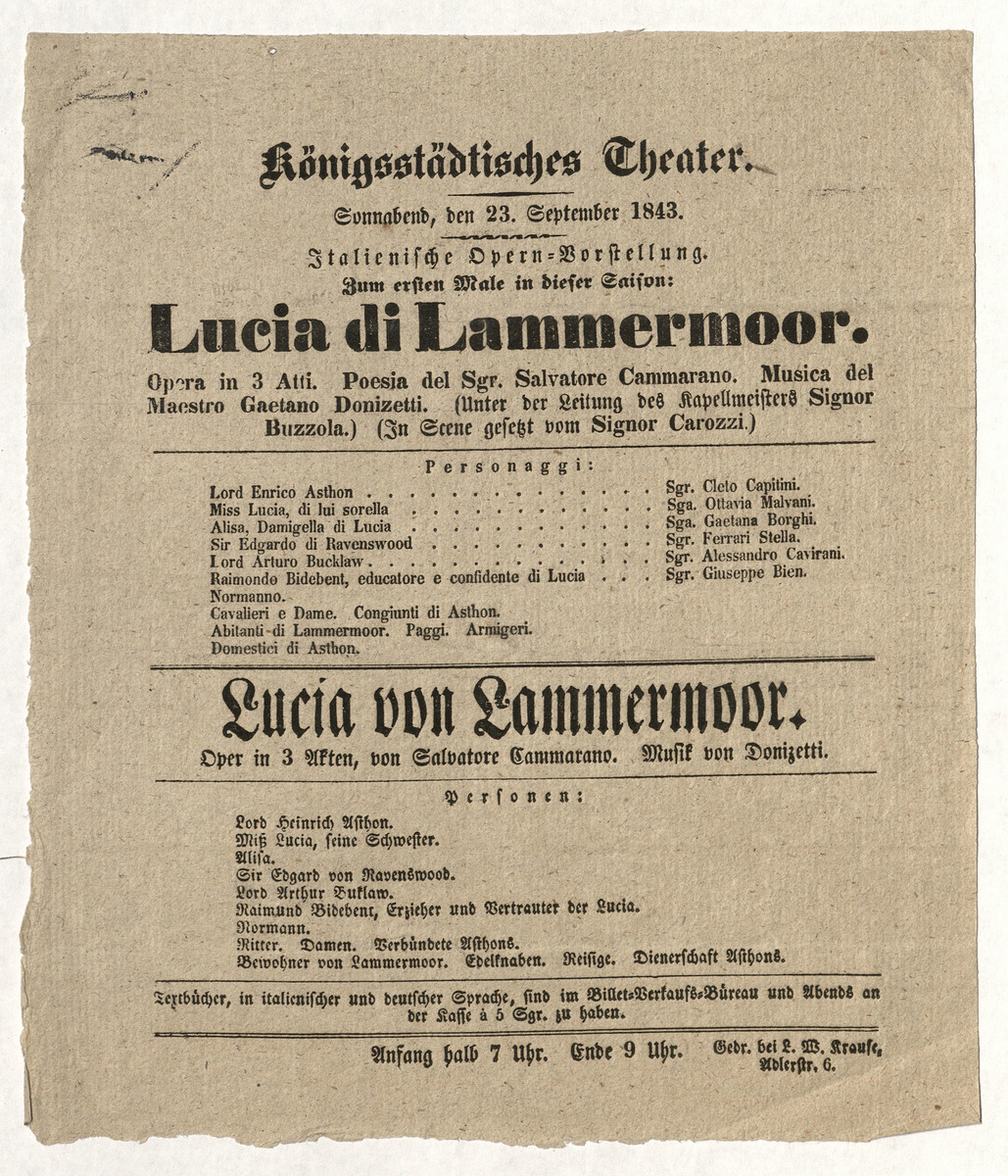 Opera houses across Europe advertised performances using playbills, like this one for a showing of Lucia in a Berlin theatre on September 23 1843.

In this scene, Edgardo has announced that he must leave Lucia as he has been sent as an emissary to Paris. They exchange rings, thus sealing a marriage under Scottish law. Lucia tells Edgardo that her loving sighs will reach him on the breeze, and that he must remember that she will be nourished by suffering.

This short film produced by Teatro di San Carlo in Naples celebrates Gaetano Donizetti’s 1835 much-loved opera Lucia di Lammermoor, by tracing its roots back to its origins in Walter Scott’s 1819 novel, The Bride of Lammermoor.