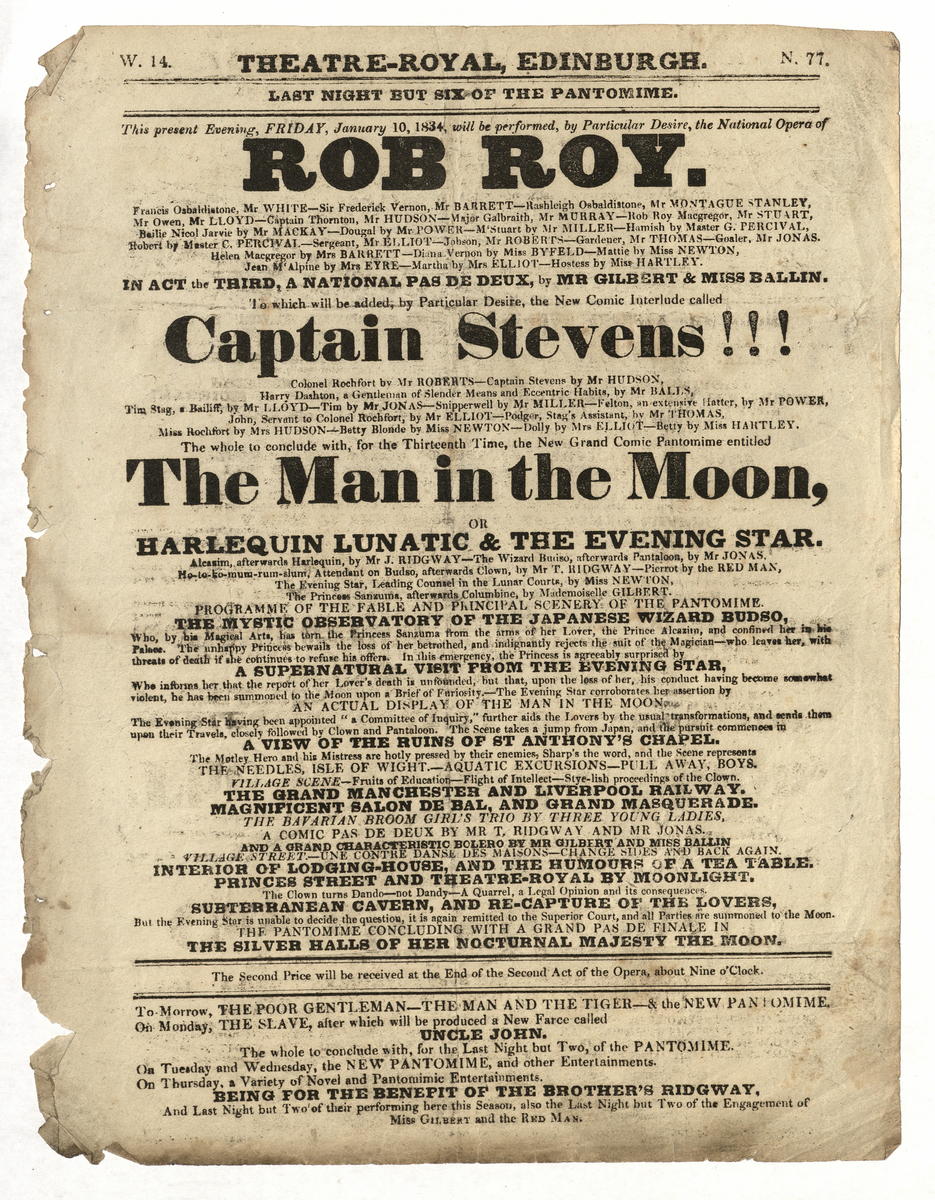 This 1834 Rob Roy playbill from Edinburgh's Theatre Royal states that the performance would conclude with the pantomime 'The Man in the Moon' containing 'an actual display of the man in the moon'.

As well as opera, Walter Scott’s novels inspired numerous plays in his own time. Scott had strong links to Edinburgh’s Theatre Royal, and often encouraged dramatic adaptations of his work.

The connection between drama and song may not be immediately obvious, but in Scott’s era, only licensed play-houses could stage serious drama. Non-licensed theatres could show musical events and spectacles such as live animal performances, but could not perform shows without music. So, most stage adaptations of Scott’s works contained music as well as pantomime-style entertainment, to enable them to be shown widely.

These productions were popular with the public. Even the Theatre Royal Covent Garden, one of the few theatres with a licence enabling it to stage drama without music, showed the musical adaptations of Scott’s novels. 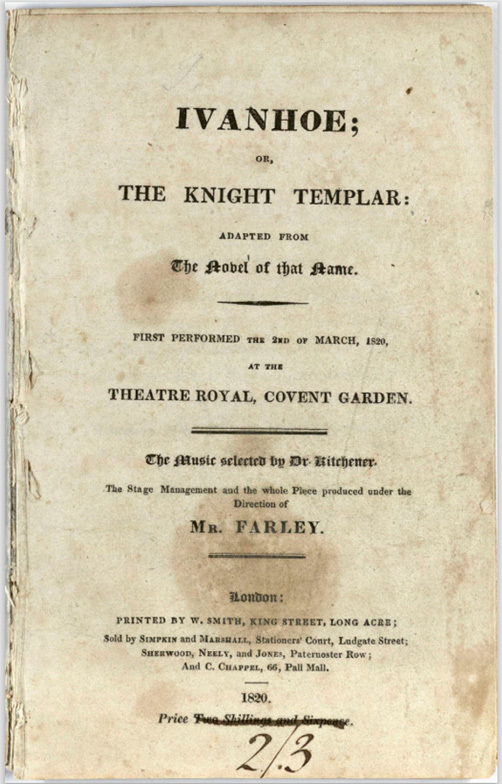 Ivanhoe, or, The Knight Templar: adapted from the novel of that name
Samuel Beazley
1820

Samuel Beazley (1786-1851) was an English architect, novelist and playwright. First shown in 1820 at the Theatre Royal Covent Garden, his ‘musical drama’ adaptation of Ivanhoe was described in a review as ‘moderately successful’ when it was revived in 1837.

The plays introduced Scott’s fiction to a wider audience, but often departed from the novels. Scott’s Rob Roy ends on a note of uncertainty about how the Highlander Rob and his family fit into modern society. But in the dramatist Isaac Pocock’s theatrical version, first staged in 1818, the final song presents the Highlanders as having become agents of a new British Empire. The later nineteenth-century repurposing of Scott’s image in support of Empire relied less on Scott’s original writing than it did on adaptations of his work. 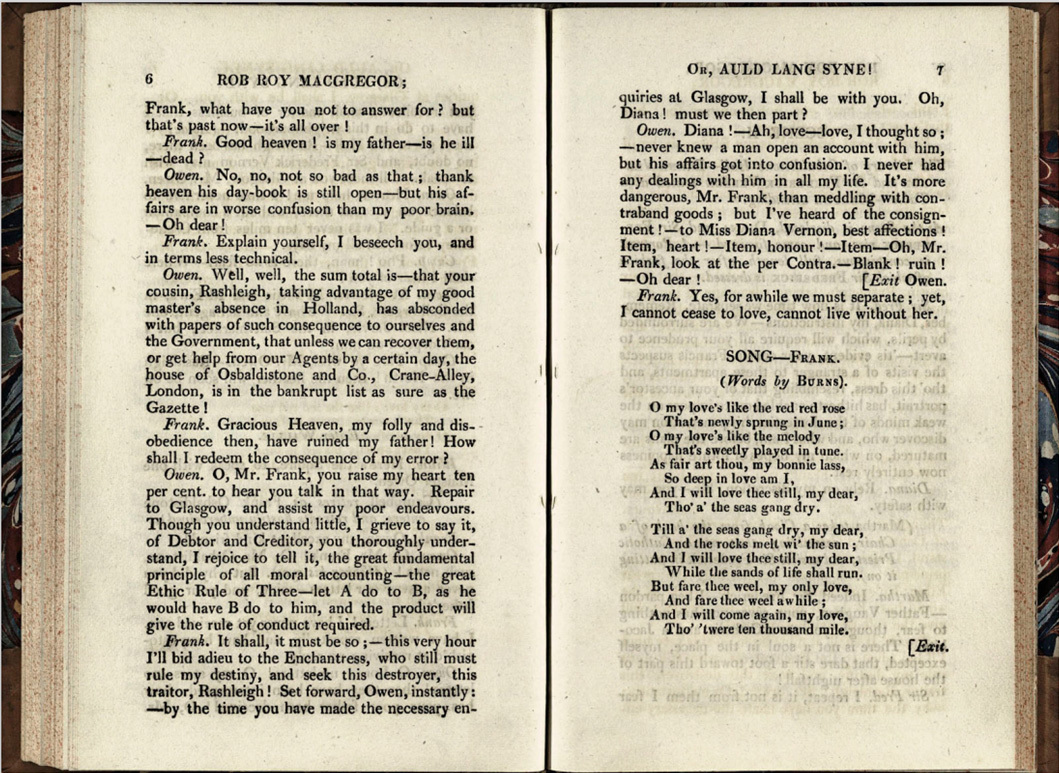 Robert Burns’s 1794 song ‘A Red, Red Rose’ is one of the musical interludes Isaac Pocock included in his play adaptation of Scott’s Rob Roy. Frank, the young Englishman who meets Rob Roy as he travels to Scotland, sings the love song to his future wife, Diana Vernon.

This modern rendition of Burns's song was recorded by Davy Steele for the album The Complete Songs Of Robert Burns Volume 4. 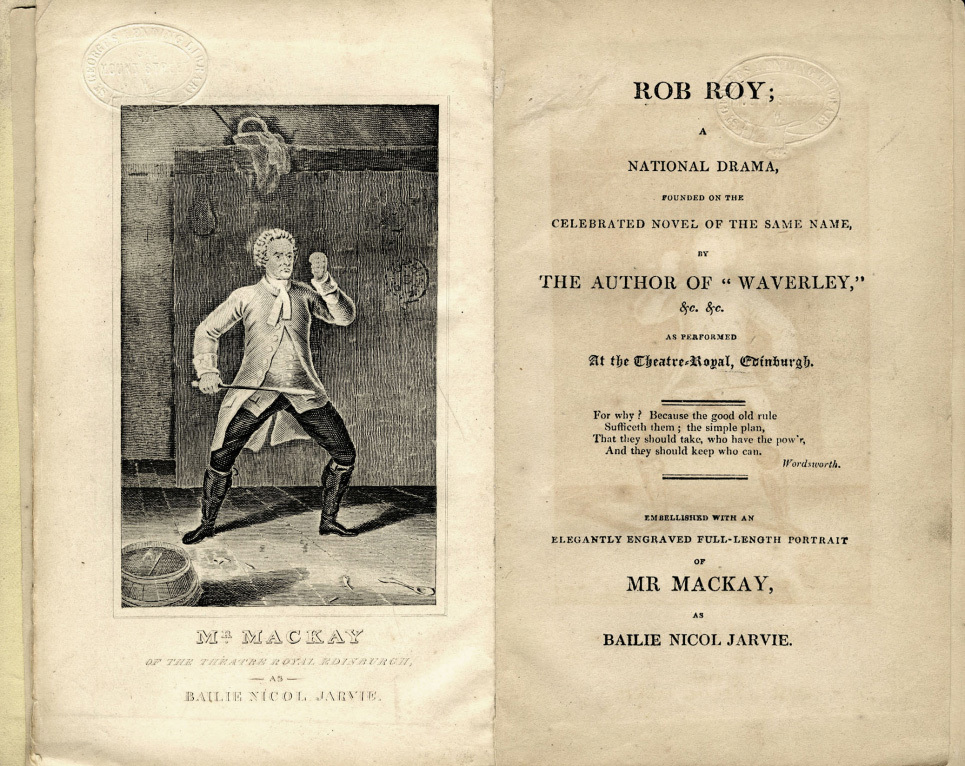 Rob Roy is the most famous dramatic adaptation of any of Scott's works. A successful production of it by Isaac Pocock saved Edinburgh's Theatre Royal from bankruptcy in 1819. The play was shown regularly thereafter. One of its most popular elements was the comedic character of Bailie Nicol Jarvie, who was especially well-loved when being portrayed by the actor Charles Mackay (1787-1857). Scott himself was impressed with Mackay, and wrote to friends to encourage them to see his performance in the play. 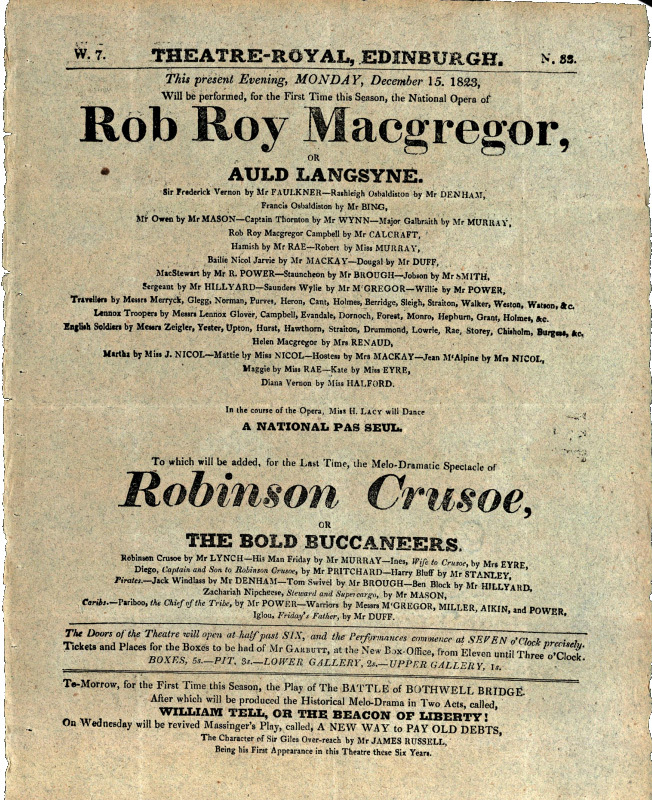 A playbill is a poster announcing a theatrical performance. This one was used to advertise Isaac Pocock's play starring Charles Mackay, but also 'The Melodramatic Spectacle of Robinson Crusoe or The Bold Buccaneers' and future plays, such as 'the Historical Melo-Drama in Two Acts, called, William Tell or the Beacon of Liberty!'. 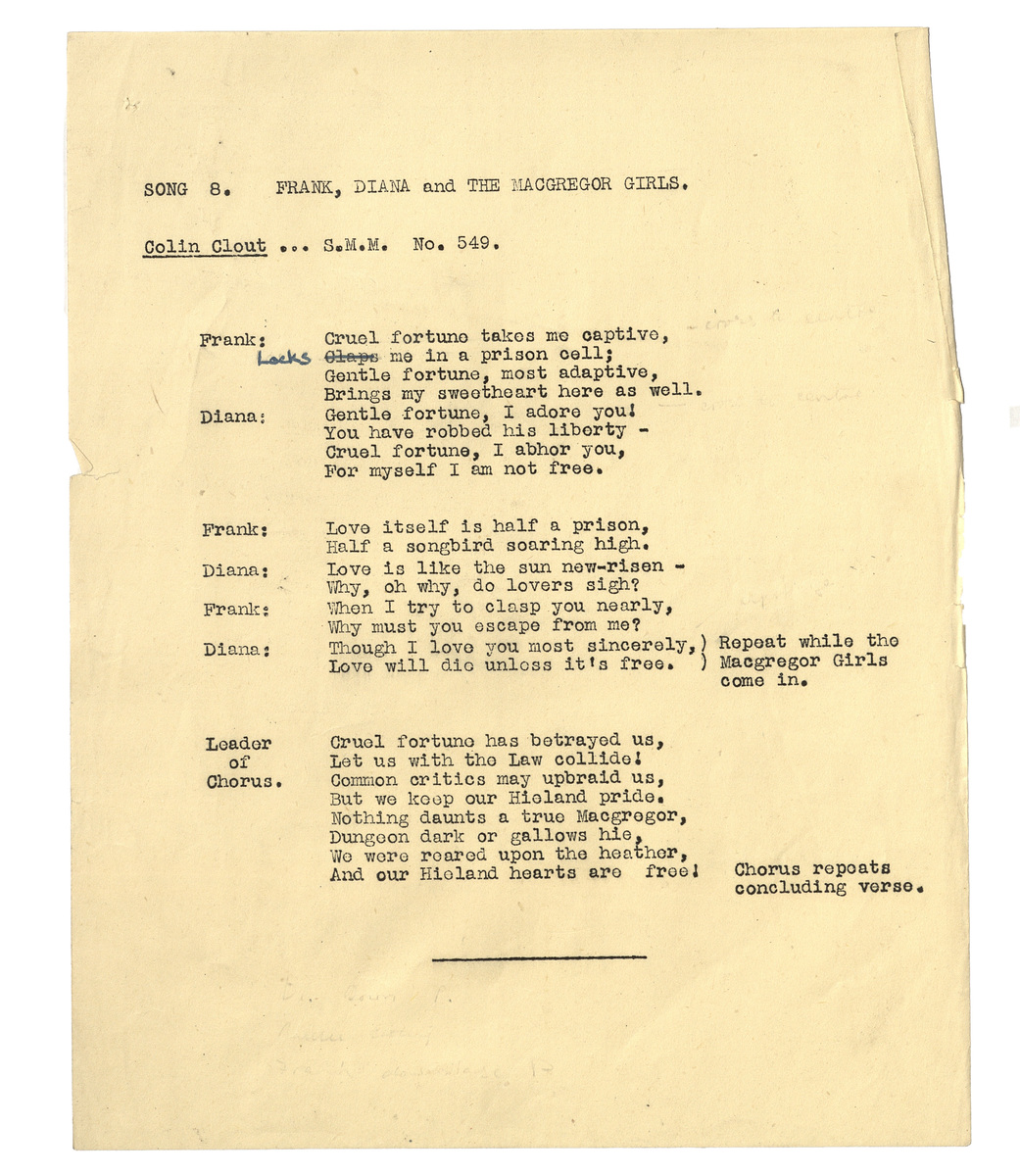 Rob Roy has inspired musical comedy in the North-East of Scotland more recently, too. In 1946, University of Aberdeen Rector Eric Linklater based that year’s student show script on Scott’s novel. The show was performed in Aberdeen’s His Majesty’s Theatre.

Adaptations of Scott’s work continued into the twentieth century, in particular in the form of illustrated editions and comics. The American ‘Classic Comics’ series published several of Scott’s novels in comic form, and encouraged their young readers to find the books in their local libraries. 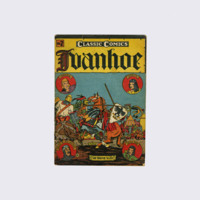 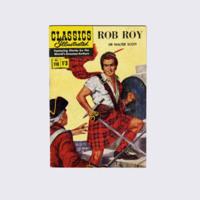 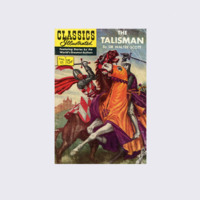 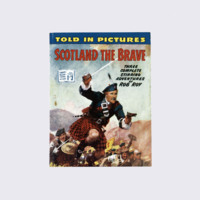 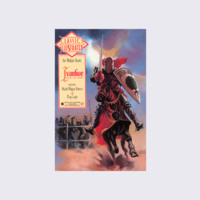 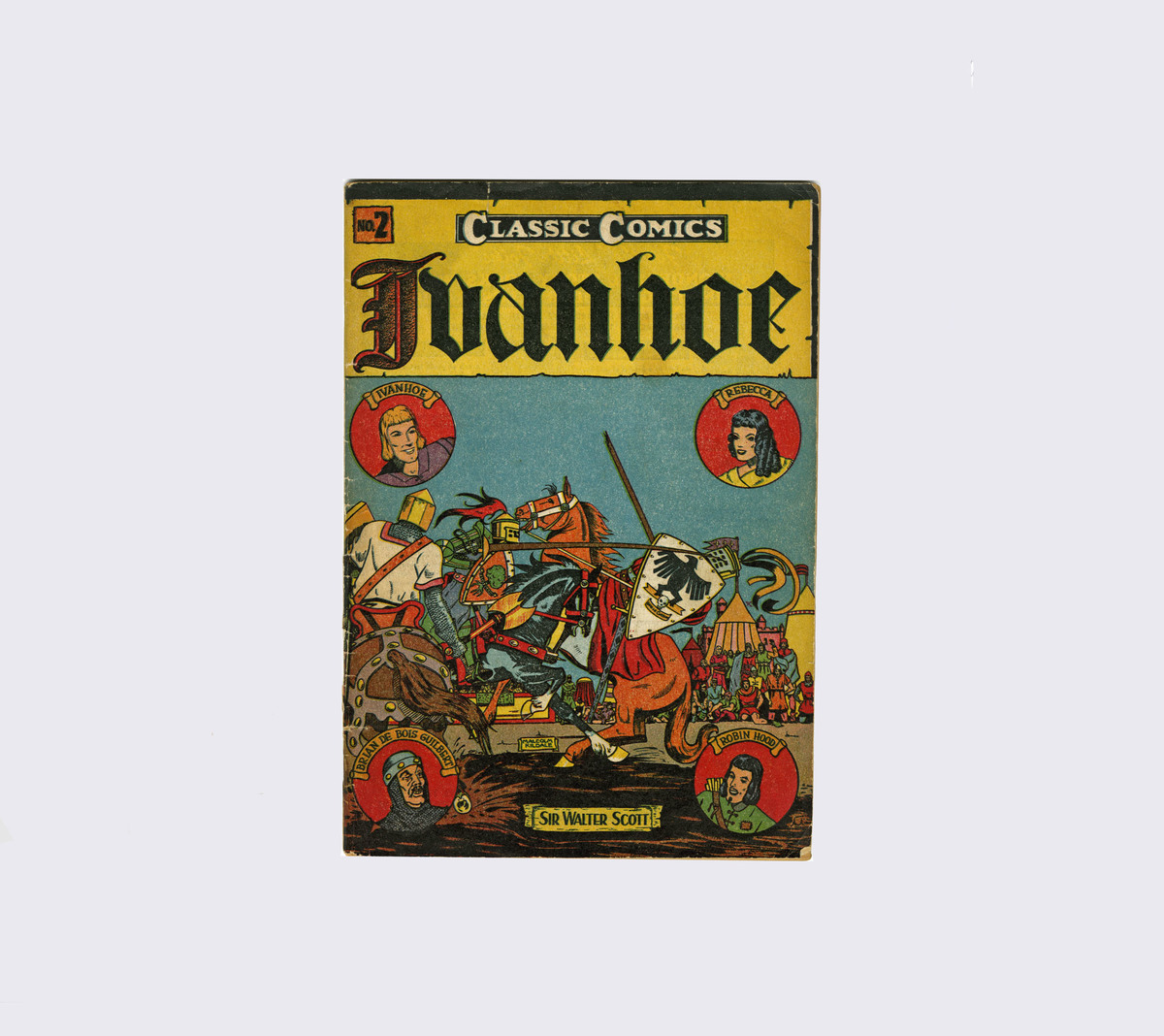 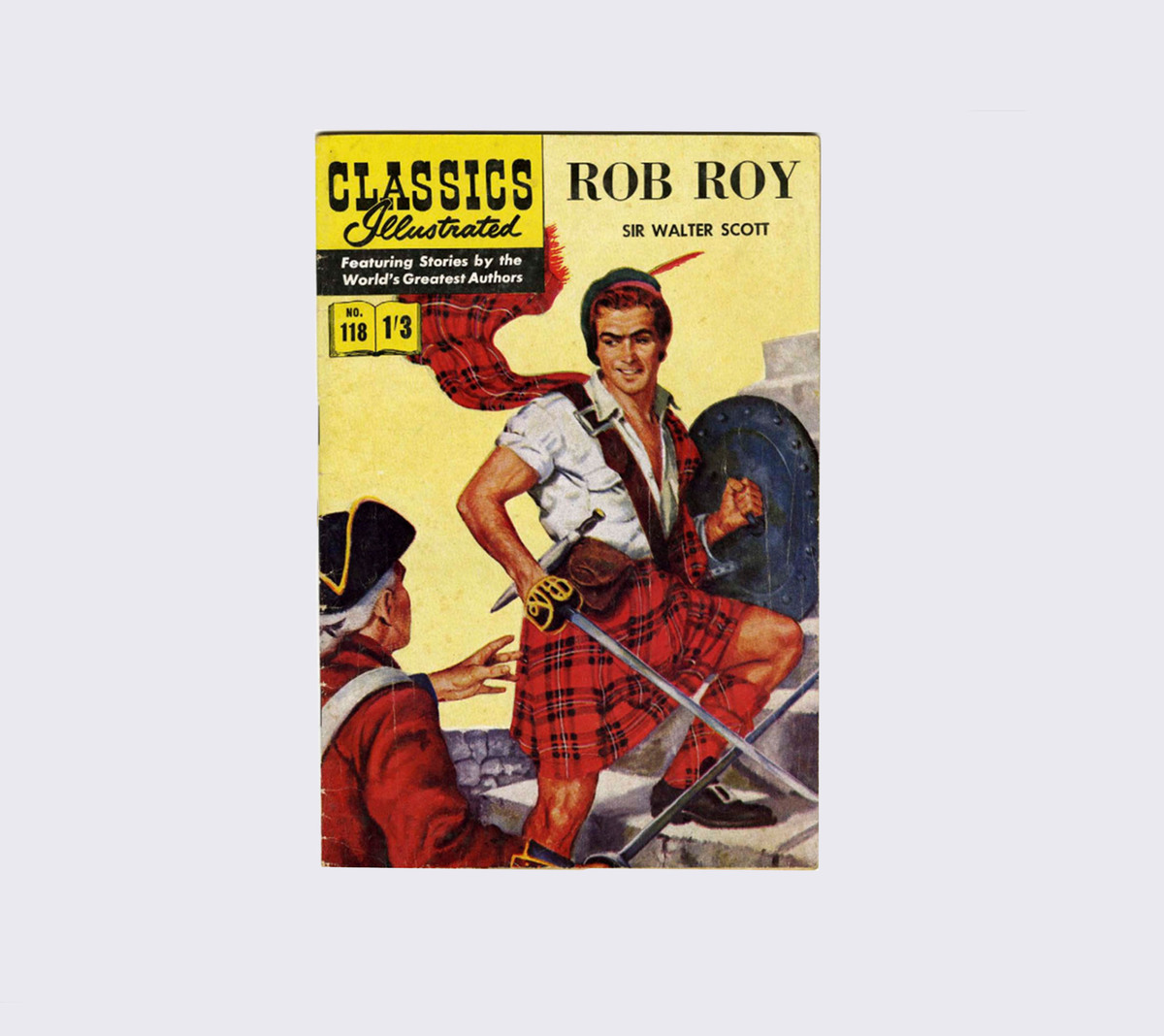 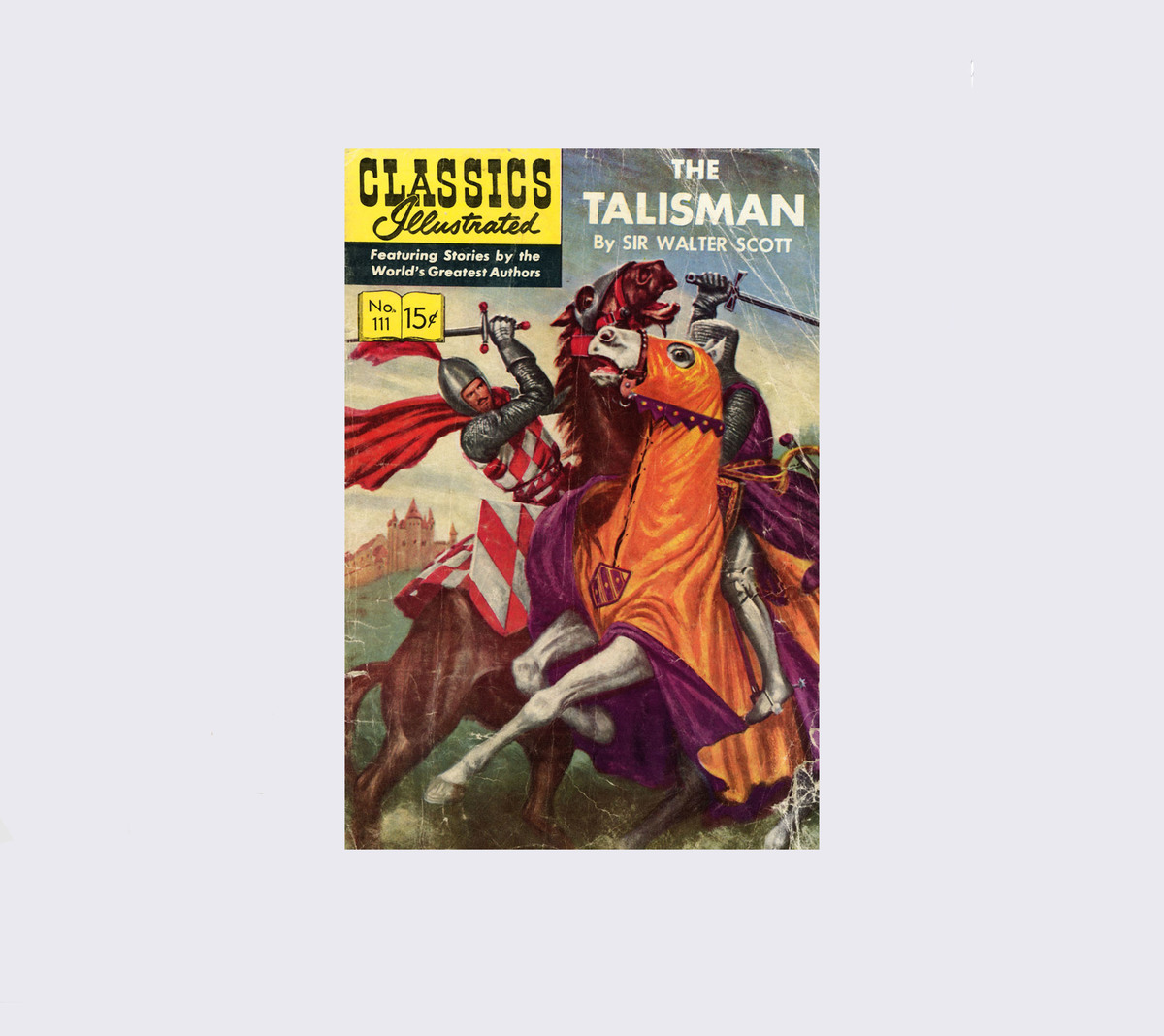 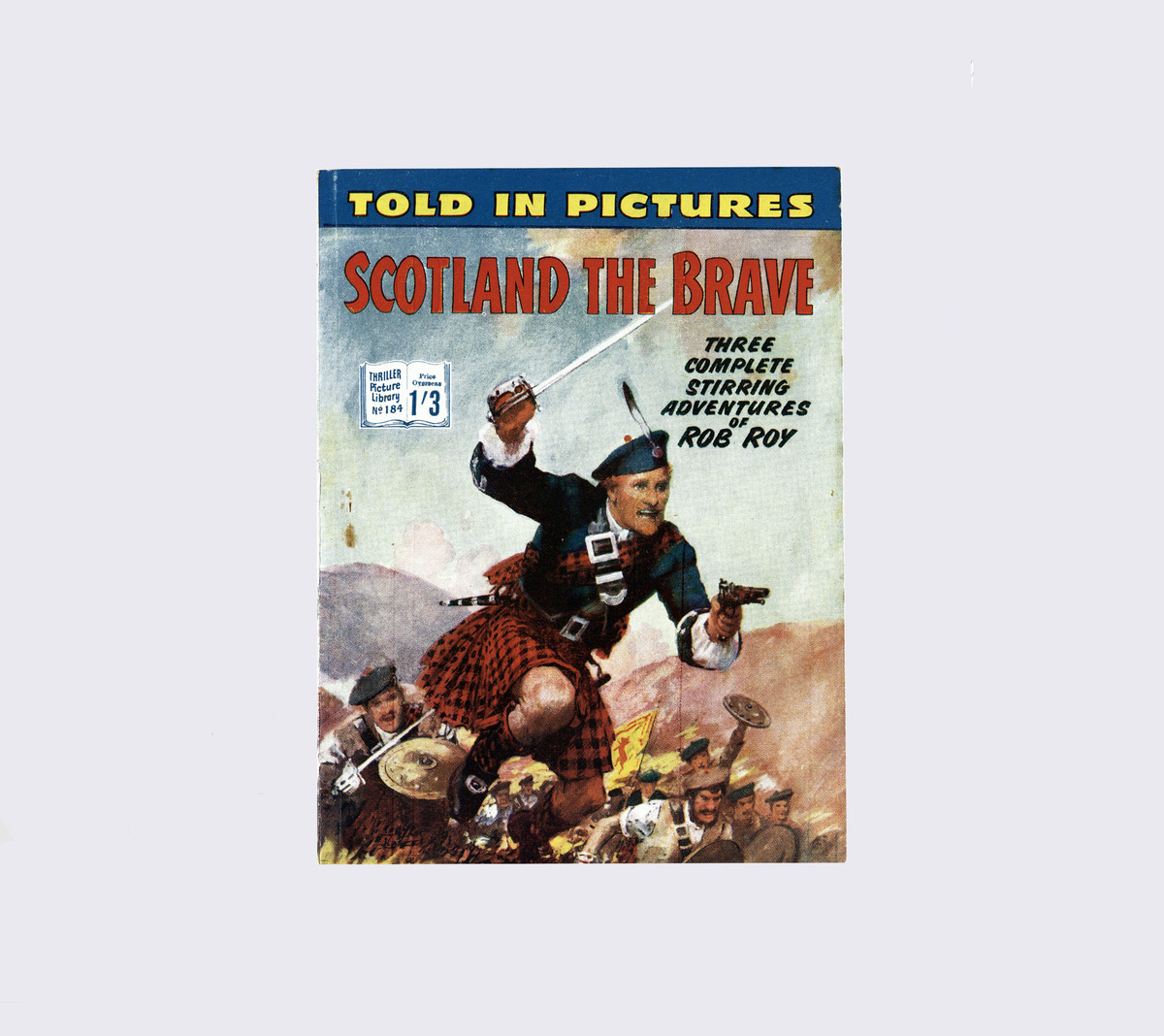 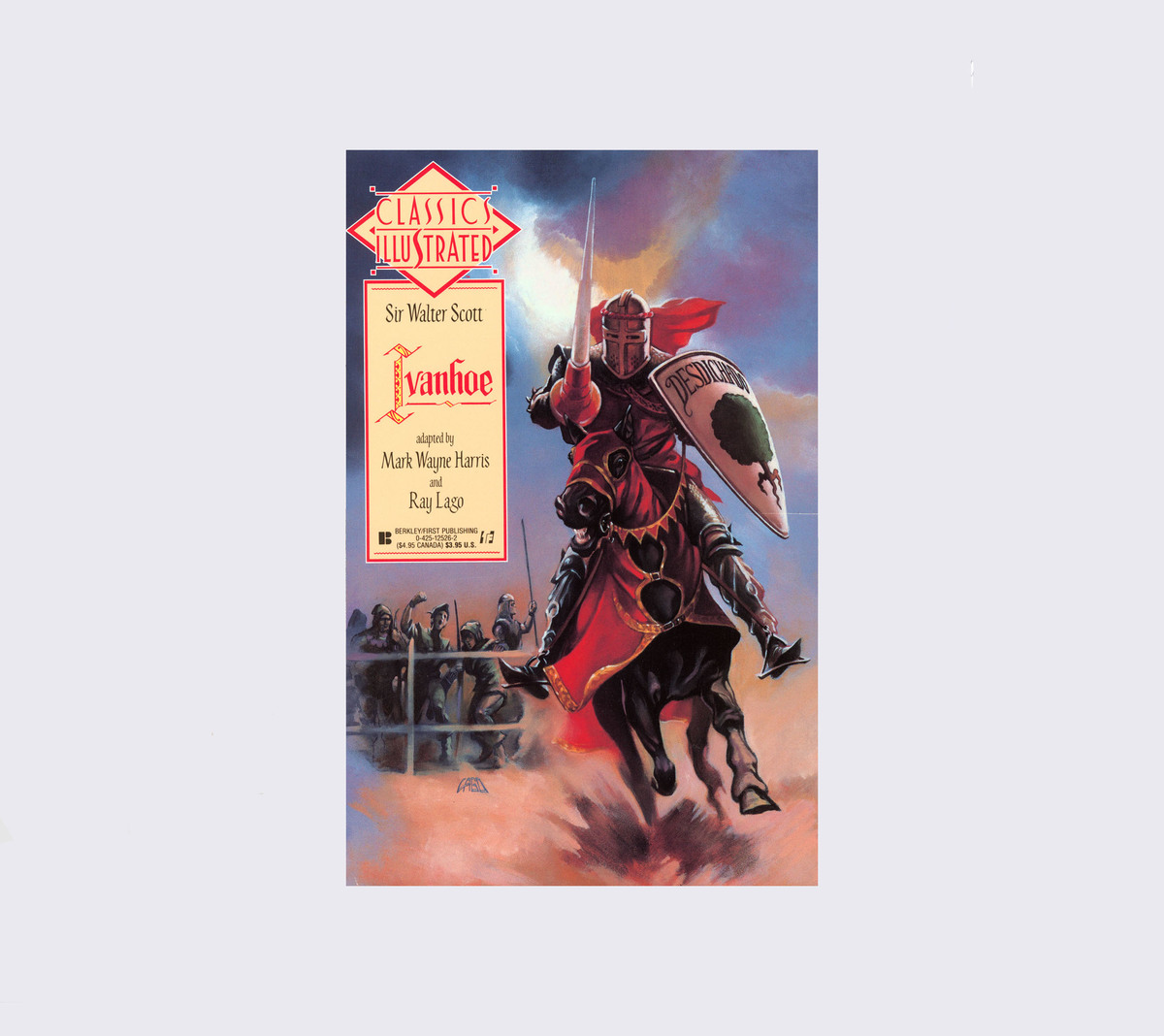 ← Scott at the Opera
Scott as Songwriter →
Scott Dramatised