"We all used to assemble over the four weeks, and it was quite arduous, because we would rehearse during the day and also in the evening. But once you got into the culture of Student Show you had to go back and do more and more."

Early in the new year, the show’s administrators get to work organising rehearsals, with script readings held first to give everyone a chance to practice their lines before full rehearsals get underway.

These days, rehearsals take place in the four weeks leading up to the show’s opening night. The second two weeks involve a gruelling schedule of 10am starts and 10pm finishes.

In this video, Paddy Rice, one of the stars of 1958's 'April Showers', and Joy Crockart and Ken McRae, two seasoned performers from a number of 1970s productions, share their memories of rehearsing for the Student Show. 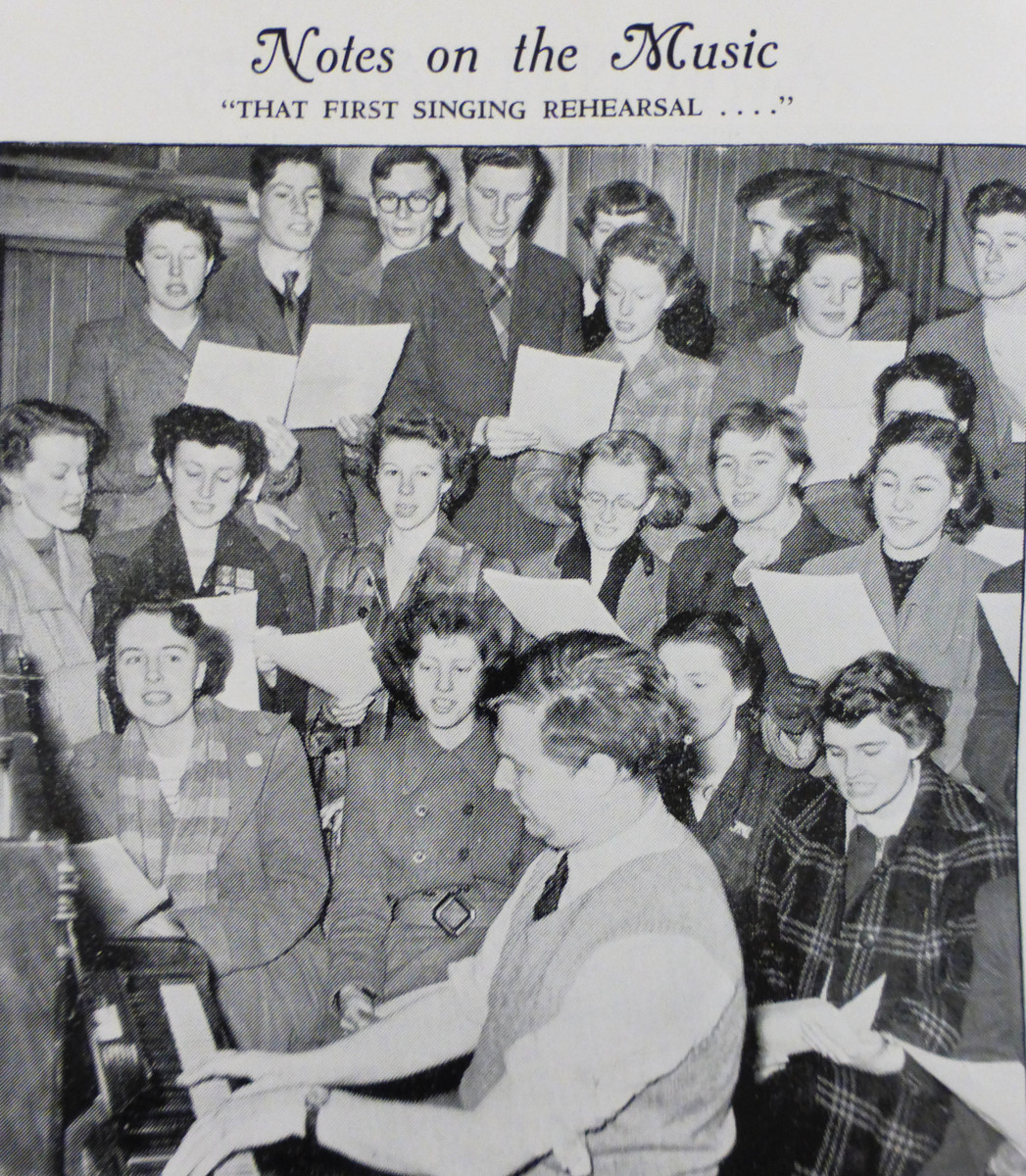 Reginald Barrett-Ayres had, two years prior to this photo being taken, joined the University of Aberdeen as a Music Lecturer. He would go on to direct show, but in this production served as Musical Director. He was known for making rehearsals fun, and for joining in with the students' impromptu football matches at the end of long days spent rehearsing. 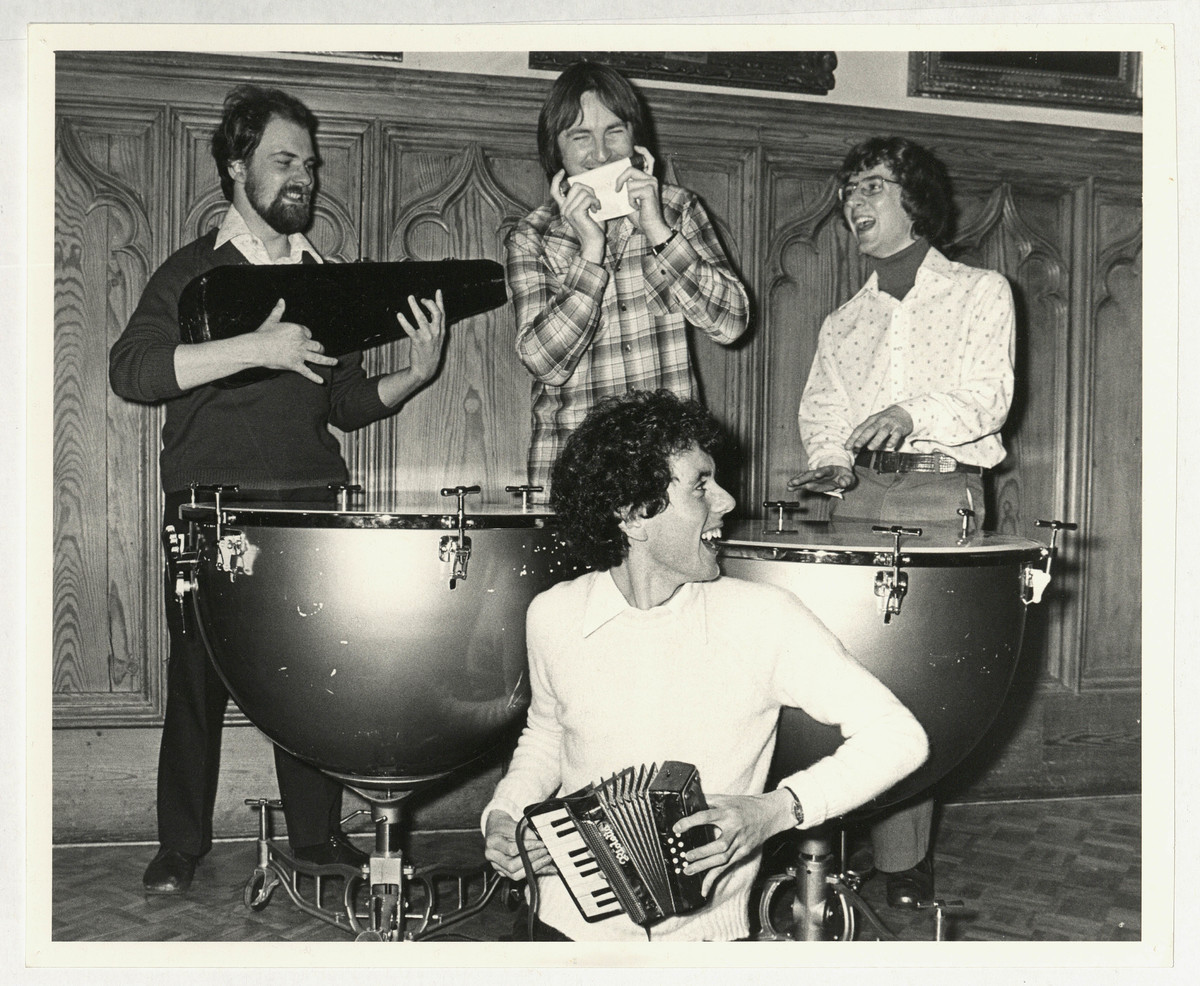 Produced and directed by Roddy Begg, who had also directed 'Fit Next' in 1974, 'Strike it Rich!' was the first show in decades to take the form of a musical comedy instead of a revue. Here, (back from left to right) are bass guitarist Jim Buchan, lead guitarist and Script Editor Eric Crockart, keyboardist and Musical Director Ian Maxwell, and (at the front) keyboardist and Assistant Musical Director Ewen Ritchie, taking a break from rehearsing to pose for a photograph. 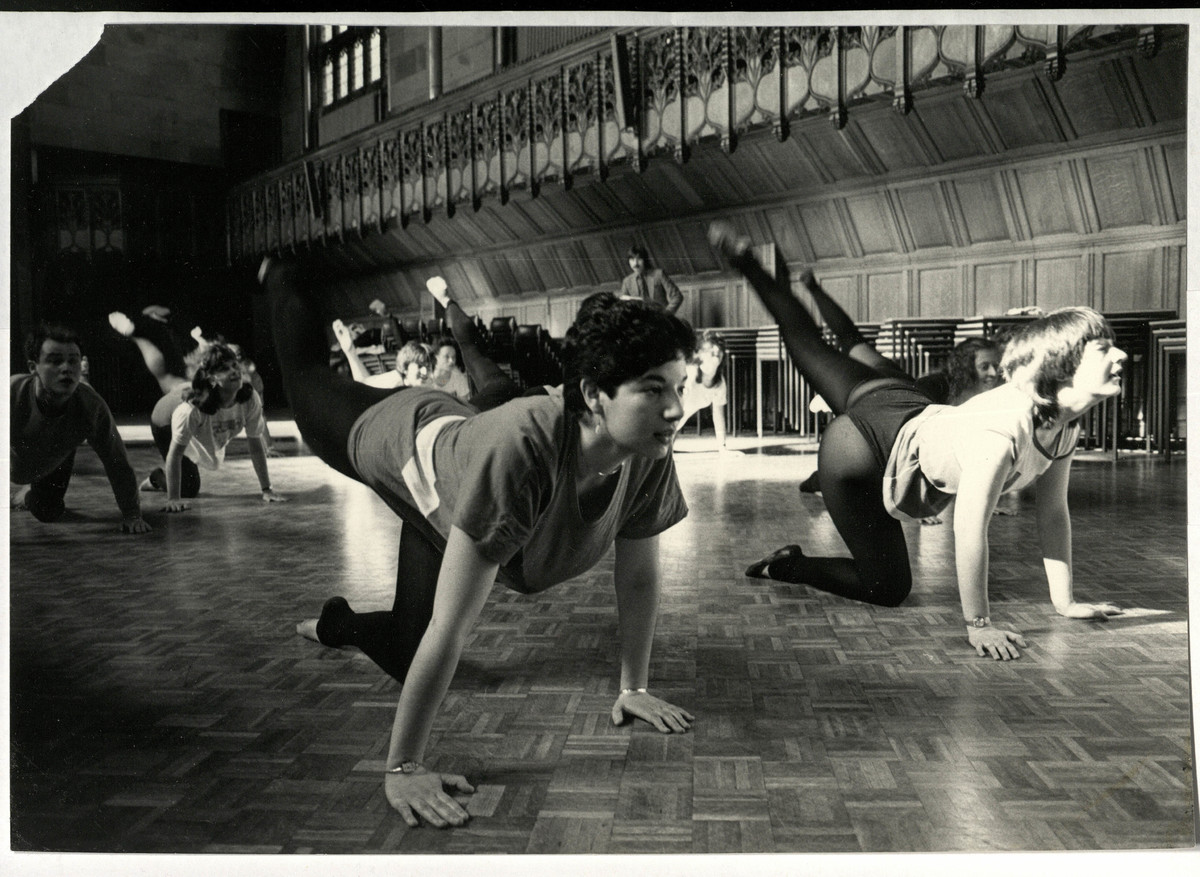 Laurie Burns, who had performed in Show as a student, came back as Choreographer for 'Fit's On'. She led workouts every morning to help the cast get fit and ready for the stage. 'Battering the cast into super-fitness' is how her methods were described in that year's souvenir programme! These are some of her unfortunate victims. 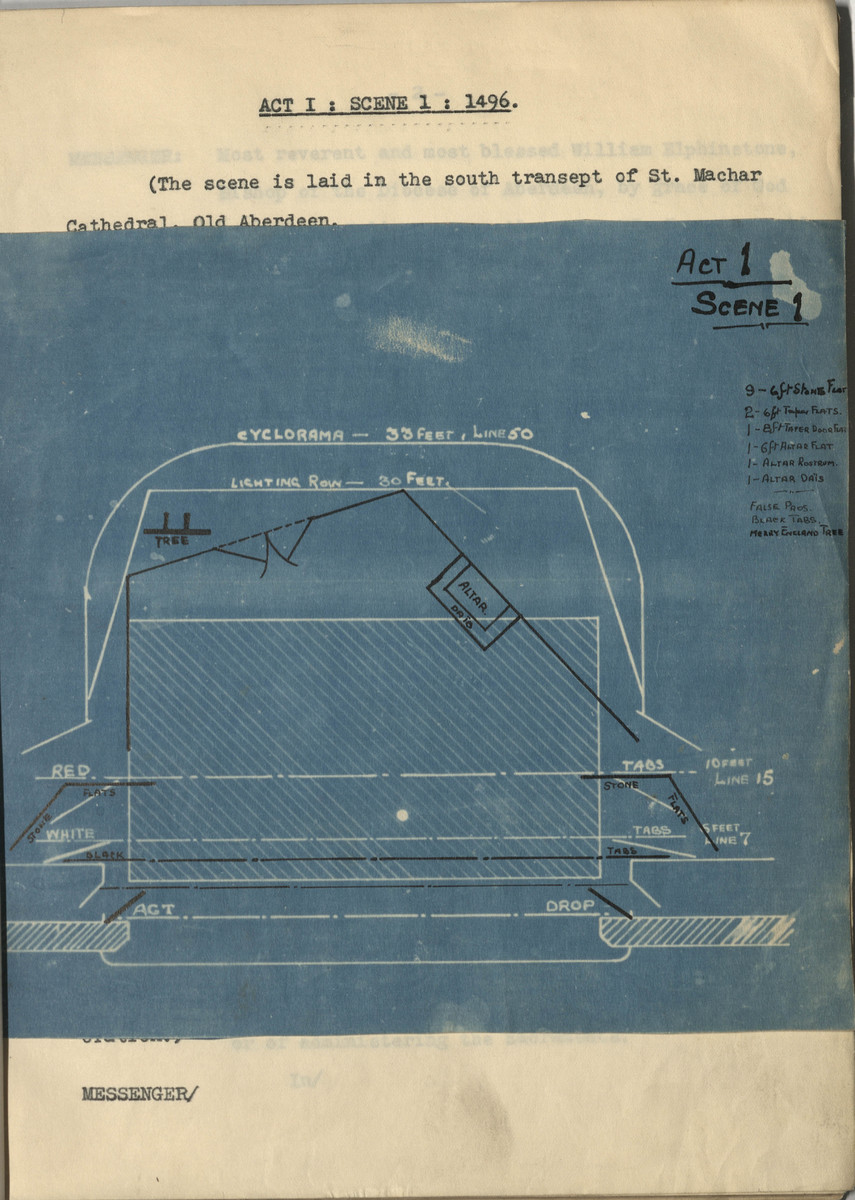 Written and directed by Dr Douglas S. Raitt, 1933's 'Town and Gown' was perhaps the most ambitious show to have yet been attempted. Telling the history of Aberdeen town and the University from 1496, the Show began in  Old Aberdeen's St Machar Cathedral, with the delivery of a Papal Bull granting Bishop Elphinstone permission to found the University.

These stage directions would have been used to show the actors their positions on stage during the scene. 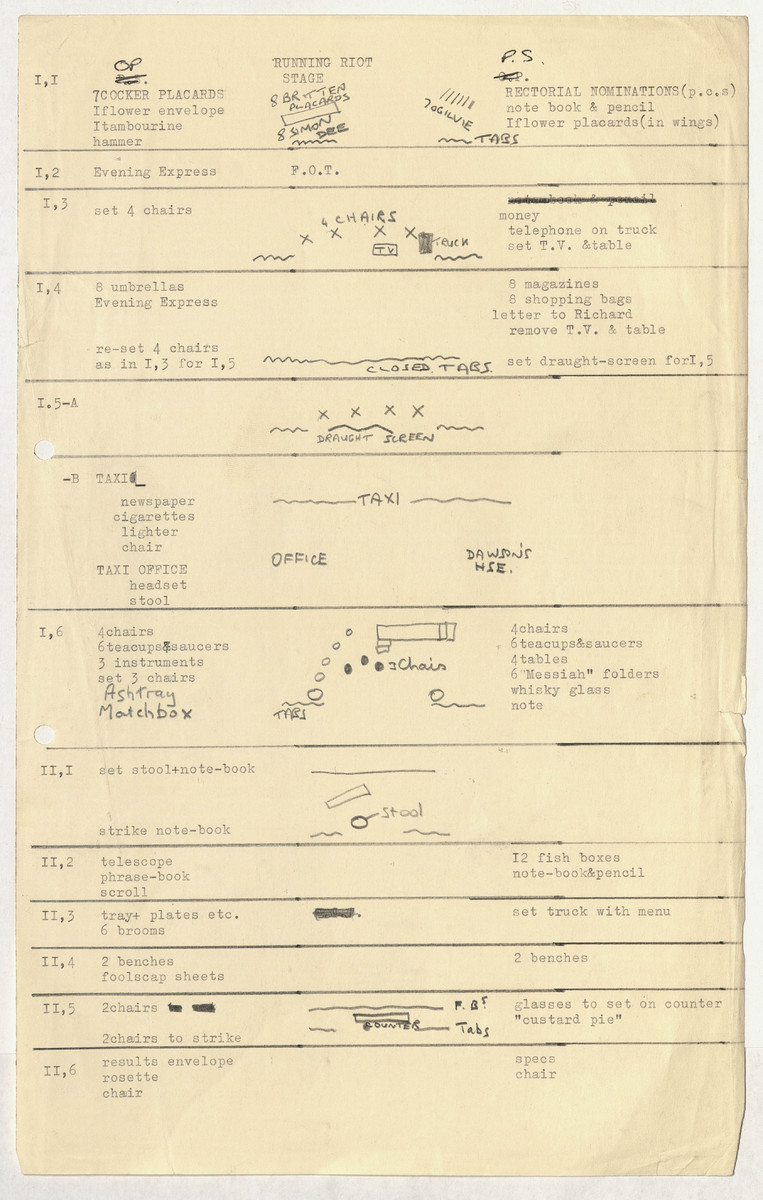 The Stage Director of 'Running Riot' was George Sinclair, who, while rehearsals were going on, would have been preparing backdrops for the sets and gathering the props, such as teacups, telescopes, brooms and umbrellas, that were needed in each scene. 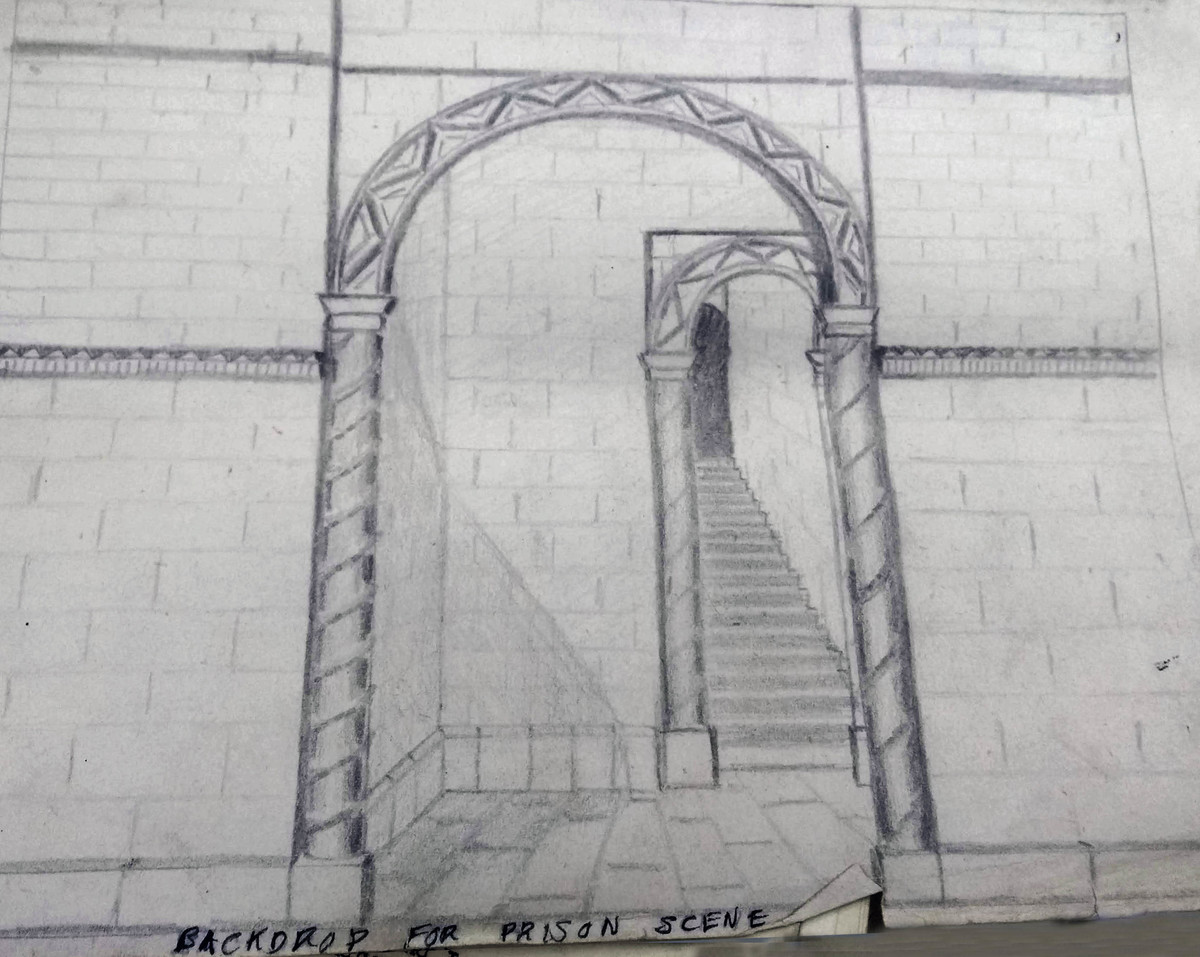 'To Meet the MacGregors' backdrop sketch
1946

This sketch shows the backdrop for the prison scene in 'To Meet the MacGregors'. Artistic representations like this helped the set design team to develop their creative vision for each act or sketch in the Show.

In this clip, the cast of the 2008 show 'Date Expectations' are having a dress rehearsal of one of their musical numbers, 'Super Duper', to the tune of... perhaps you guessed it? 'Super Trouper', by Abba.