"I have had the unique opportunity of wearing various hats throughout my time with the Show: performer (2012-2015), assistant producer (2015) and President of Charites and Communities (2015-2016). It was an honour to help the Student Show 'Michty Mia' achieve a record-breaking fundraising total of over £102,000, by helping the students find rehearsal space, putting them in touch with sponsors, and backing their corner whenever they needed it!"

In addition ti writers, there are a hale jing-bang o’ different roles that need ti be filled ti ensure each Student Show is a success, including those o’ producer, director, administrator, costume designer, choreographer, musical director an’ props manager (an’ mair).

Although maist o’ the team are students, aften 'i shows are producit by former Show writers an’ performers fa hivna been able tae leave their luv o’ Show ahin them!

In addition to writers, there are a whole host of different roles that need to be filled to ensure the Student Show is a success, including those of producer, director, administrator, costume designer, choreographer, musical director, props manager, and many more.

Although most of the Student Show team are students, often the shows are produced by former writers and performers who have never managed to leave their love of Show behind.

Keep scrolling to see a few (but by no means all) of the most vital roles in Show! Which one would you be right for? 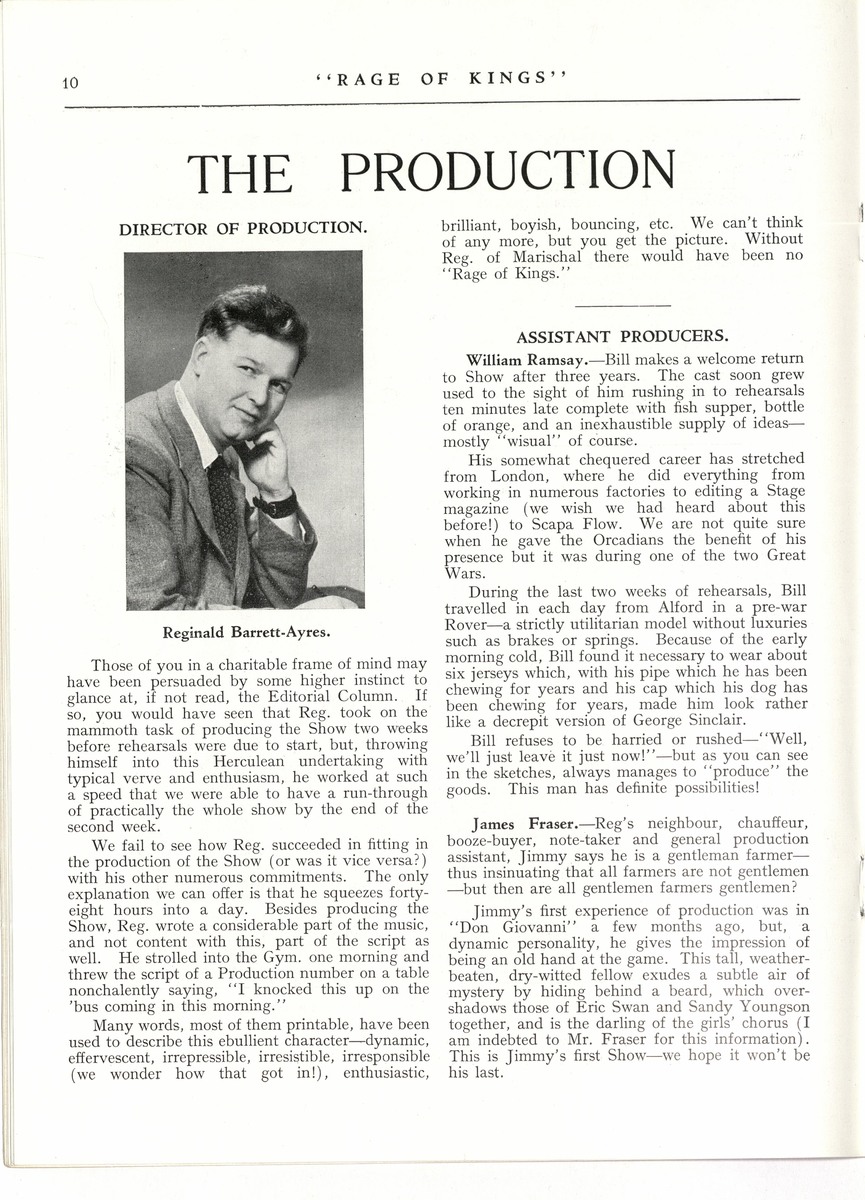 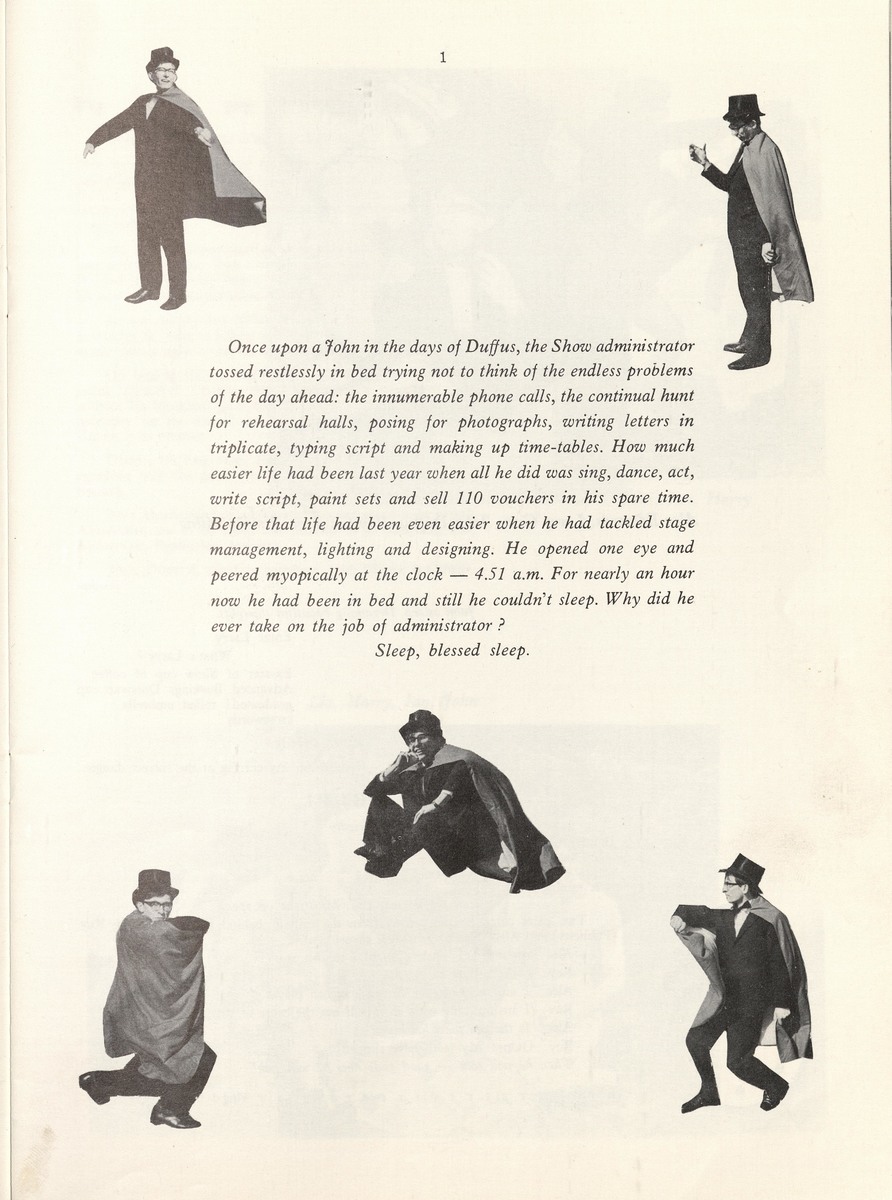 On this page of the programme from 'Jest a Minute', John Duffus, that year's Administrator, gets some of the stresses of Show off his chest! 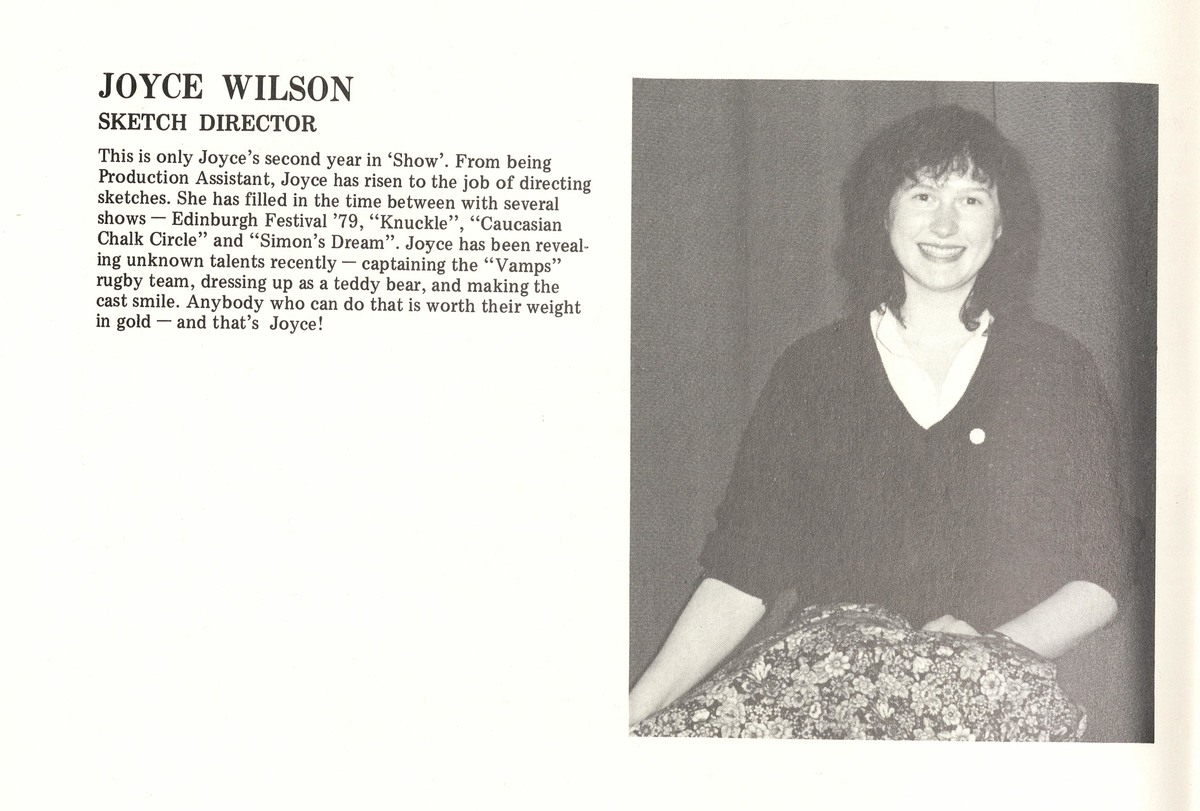 During the Second World War, when many men were conscripted into the armed forces, Pollie Bundy became the first woman to take on the role of Director / Producer for Show, for that year's 'Nuts in April'. This wasn't a watershed moment, however. When the war ended, the roles available to women in Show were once again restricted. It wasn't until 1980 that another woman filled the position, when Joyce Wilson became Sketch Director of 'Risques Galore'. 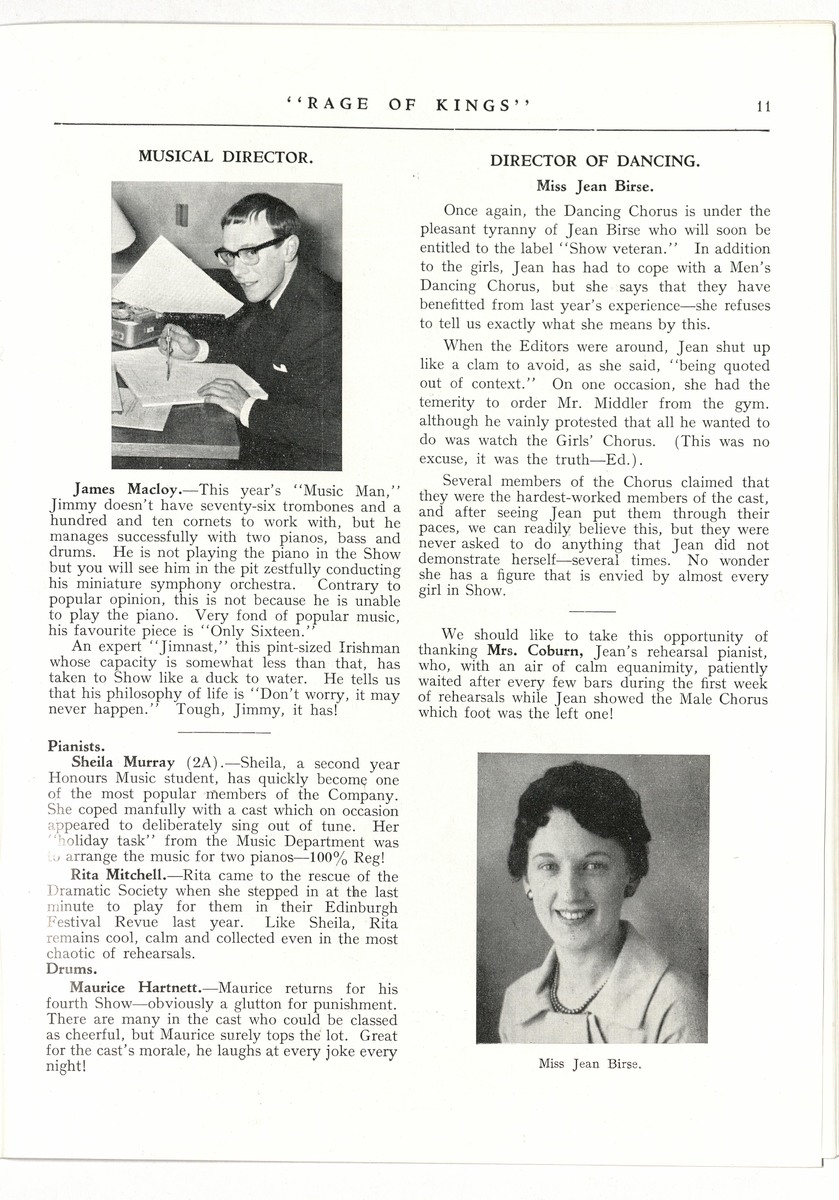 'Rage of Kings' programme
1963
Jean Birse, pictured on this page, spent a number of years choreographing Student Show as Director of Dancing, working closely with the musical team to develop and practise routines. A trained ballet dancer, she is said to have demonstrated each dance move numerous times to help 'les girls' (the female dancers) learn the routine. 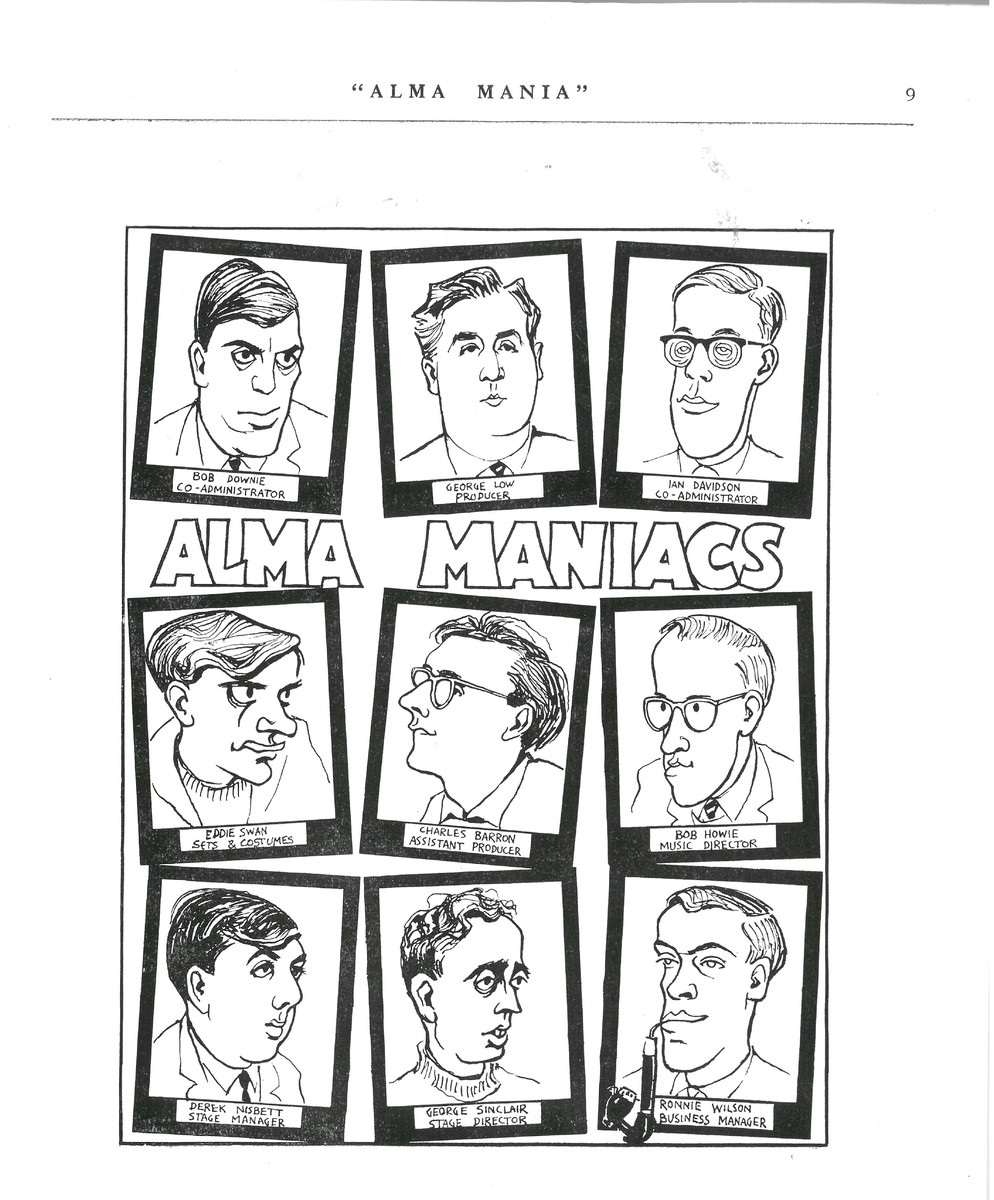 Edi Swan worked as Set Designer for Student Show on 1959's 'Alma Mania'. Elsewhere in the programme, he is described as the 'undisputed king of stage set design' and is said to be happiest 'balanced precariously on the paint frame slapping paint on cloth'. He worked on a number of other shows and he was often credited alongside the producers and directors in the souvenir programme, which demonstrates how important he was to the team. In the audio clip below, hear more about Edi and his team's work from John Duffus, Show Administrator and Performer from 1965 to 1969. 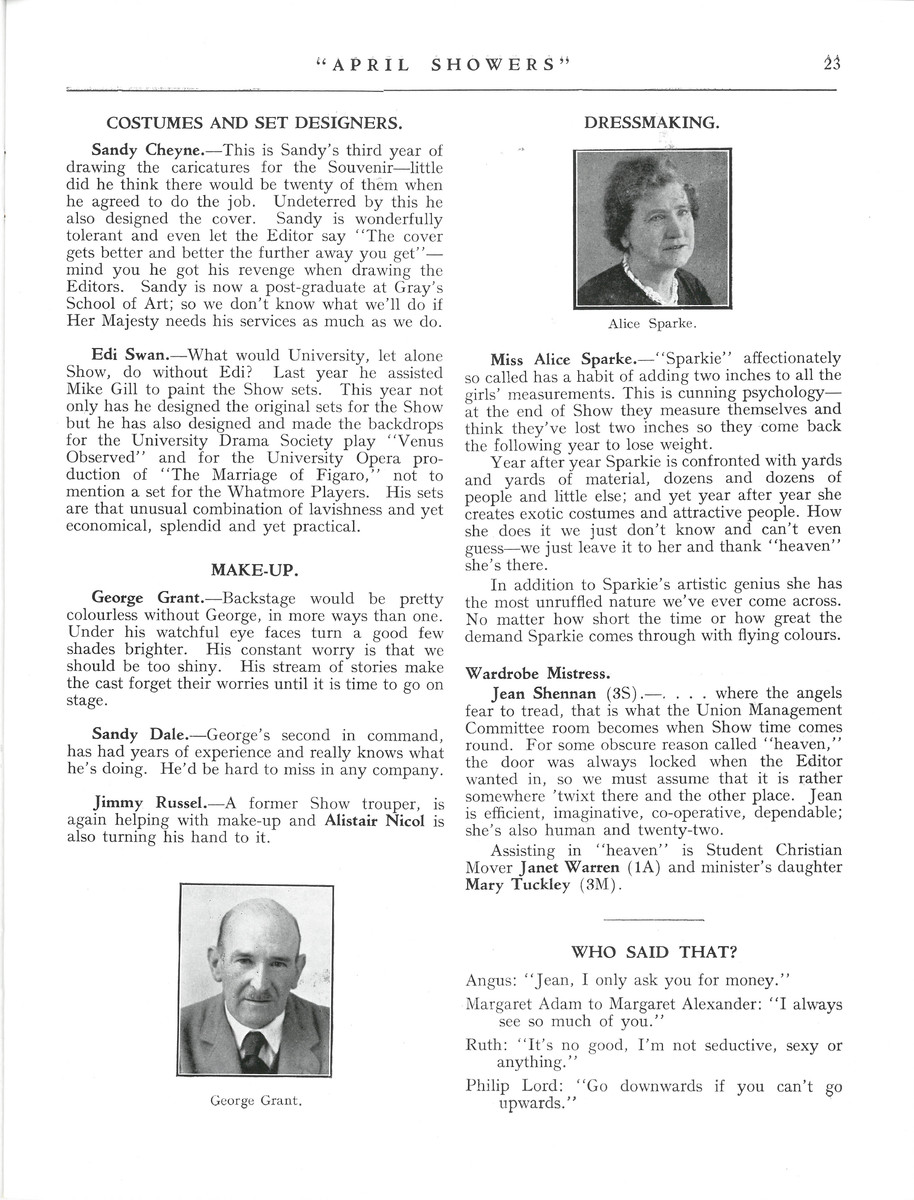 Alice Sparkes worked as Dressmaker for the Student Show in 1958, a role she had filled since the Second World War, when she dressed the cast on a shoestring budget. Previous dressmakers included Isobel Gordon and Rita Chapman. This page from the 'April Showers' souvenir programme also introduces the make-up artists, George Shaw, Sandy Dale and Jimmy Russell. 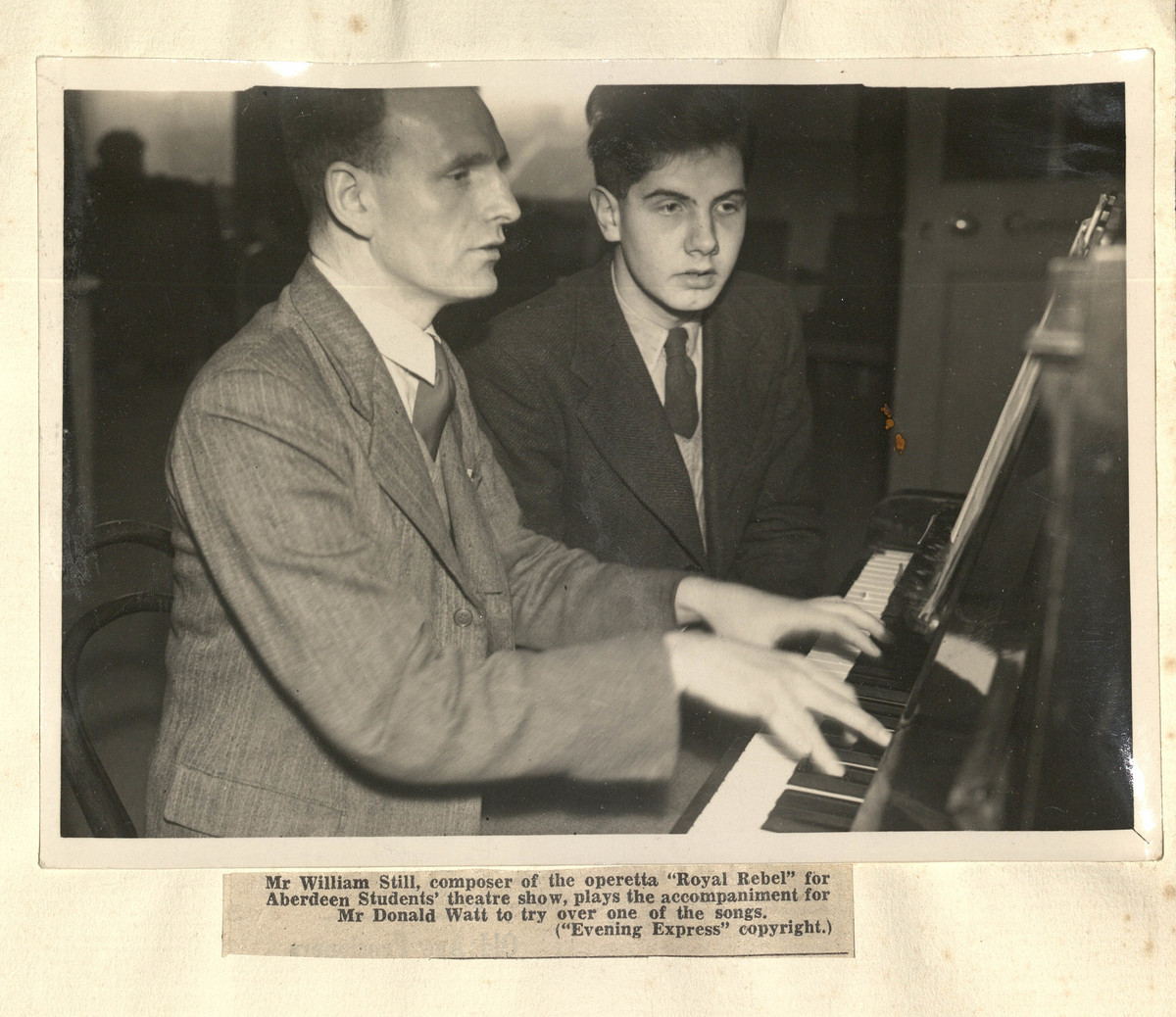 William Still composed songs for the 1944 musical, 'Marischal Moments', including the operetta 'Royal Rebel'. In Show's early years, each song was an original composition, whereas today, parodies of already popular songs are favoured. Other composers of the 1930s and 40s included Lambert Wilson and Douglas Raitt.

The stars of Show are found through an audition process that is designed to be welcoming, relaxed and enjoyable for those auditioning. Anyone can audition for Show, whether they have experience of performing or not.

Often, the cast also get involved with other tasks, like painting the sets, creating props, sewing costumes, and promoting the Show in order to raise as much money as possible for charity. 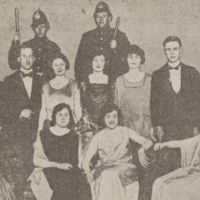 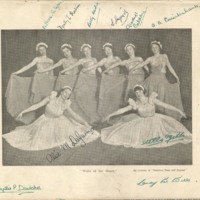 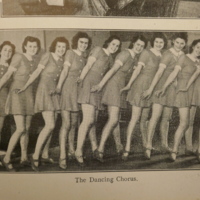 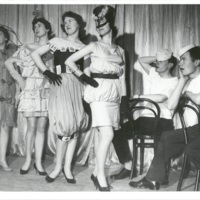 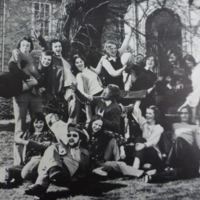 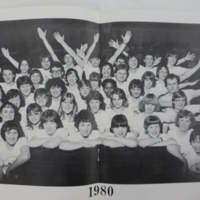 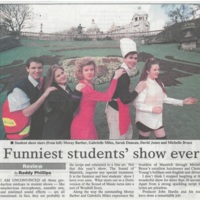 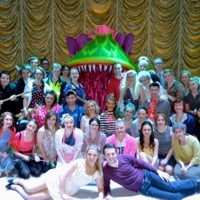 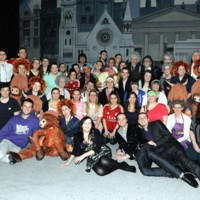 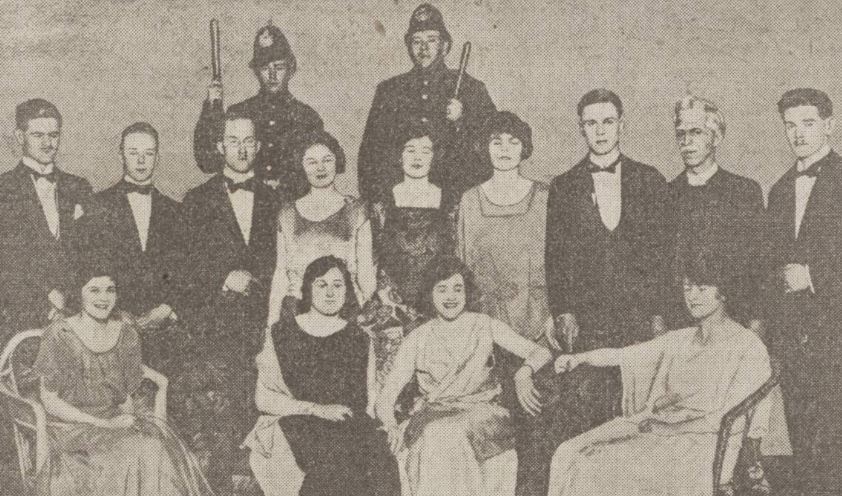 The cast of Rosemount Nights, 1923 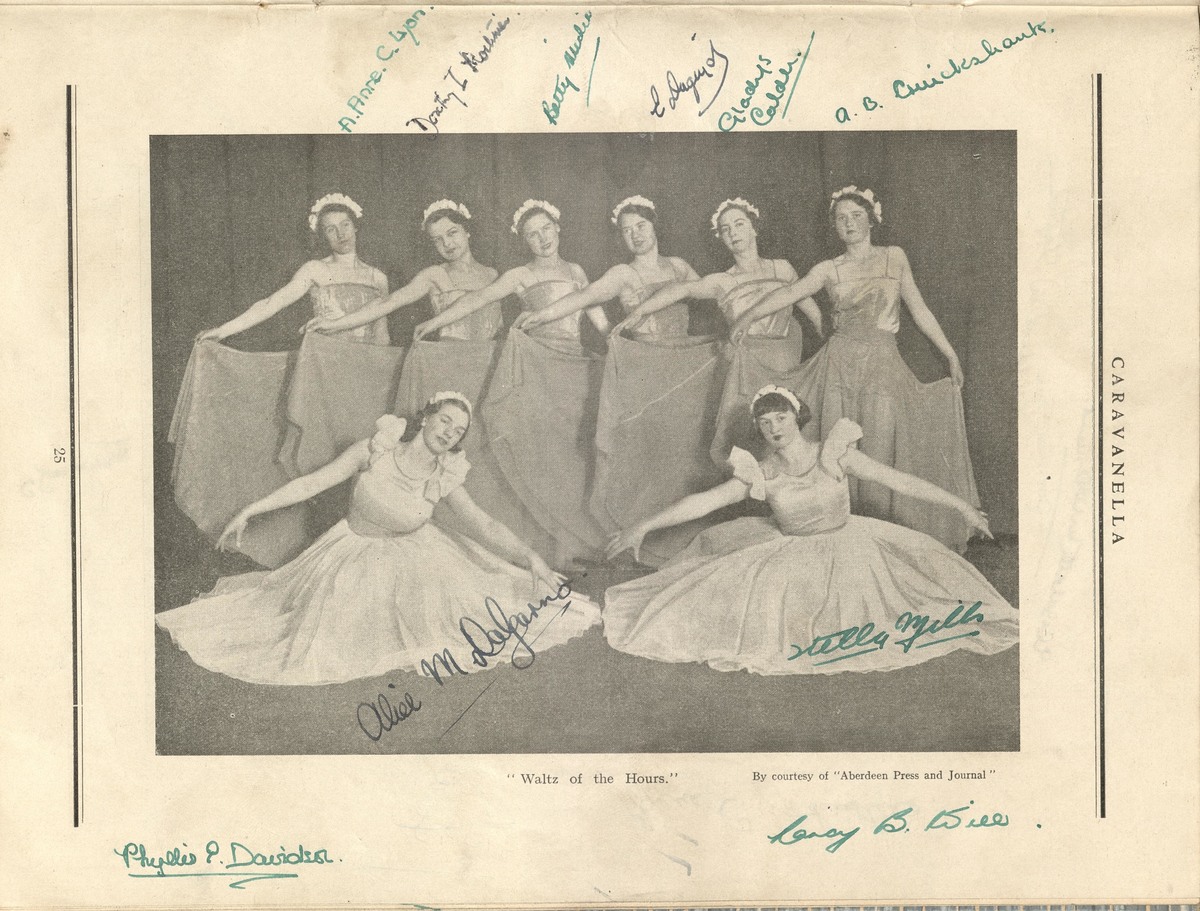 The Dancing Chorus of Caravanella, 1935 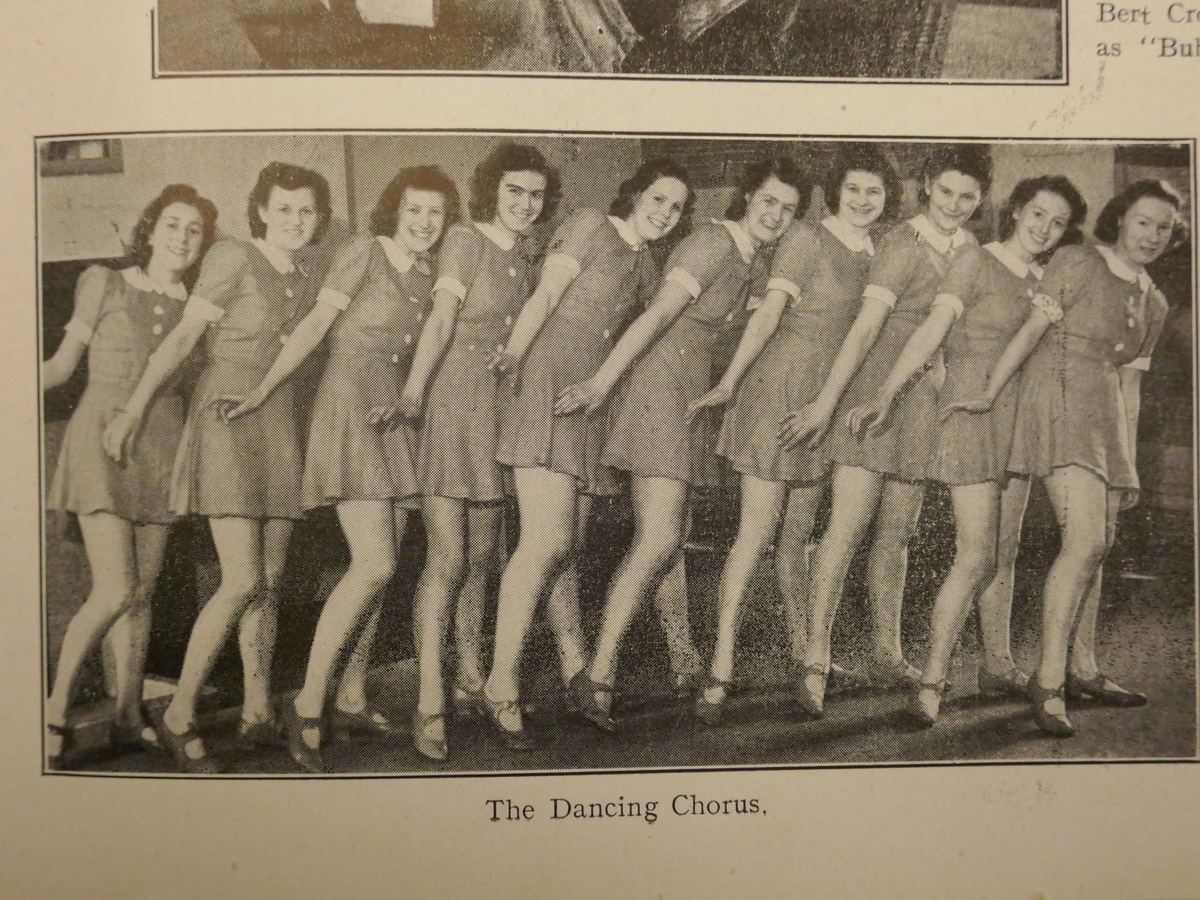 The Dancing Chorus from Nuts in April, 1943 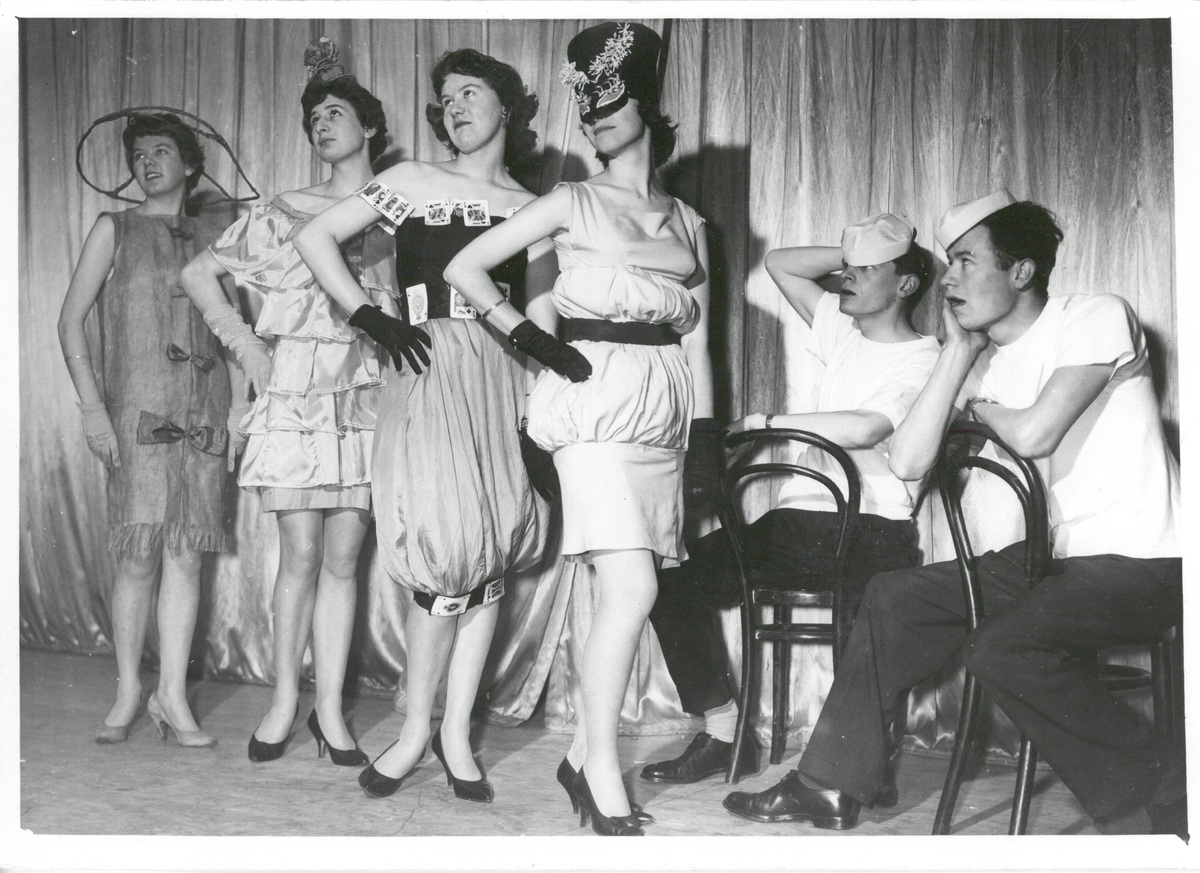 The cast of Folies Berserques, 1960 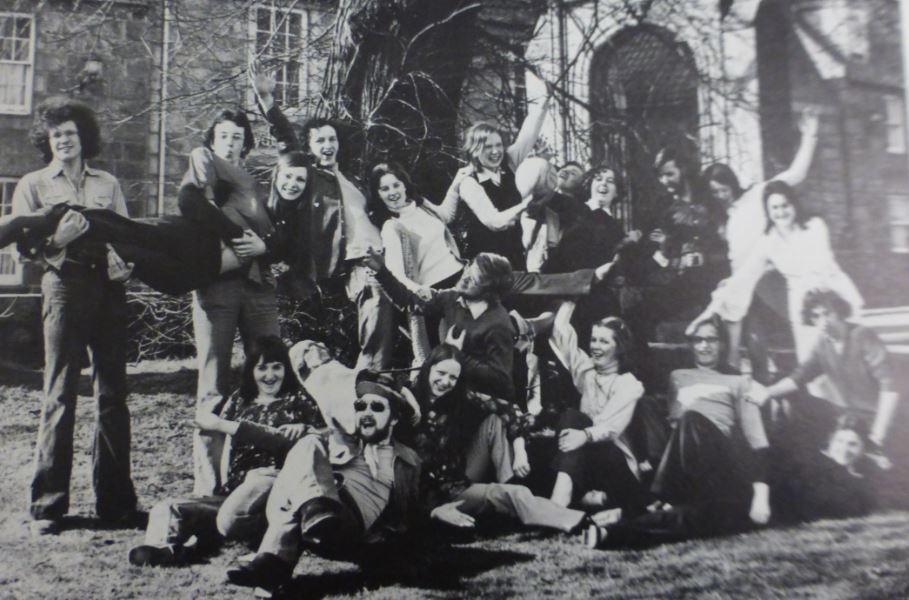 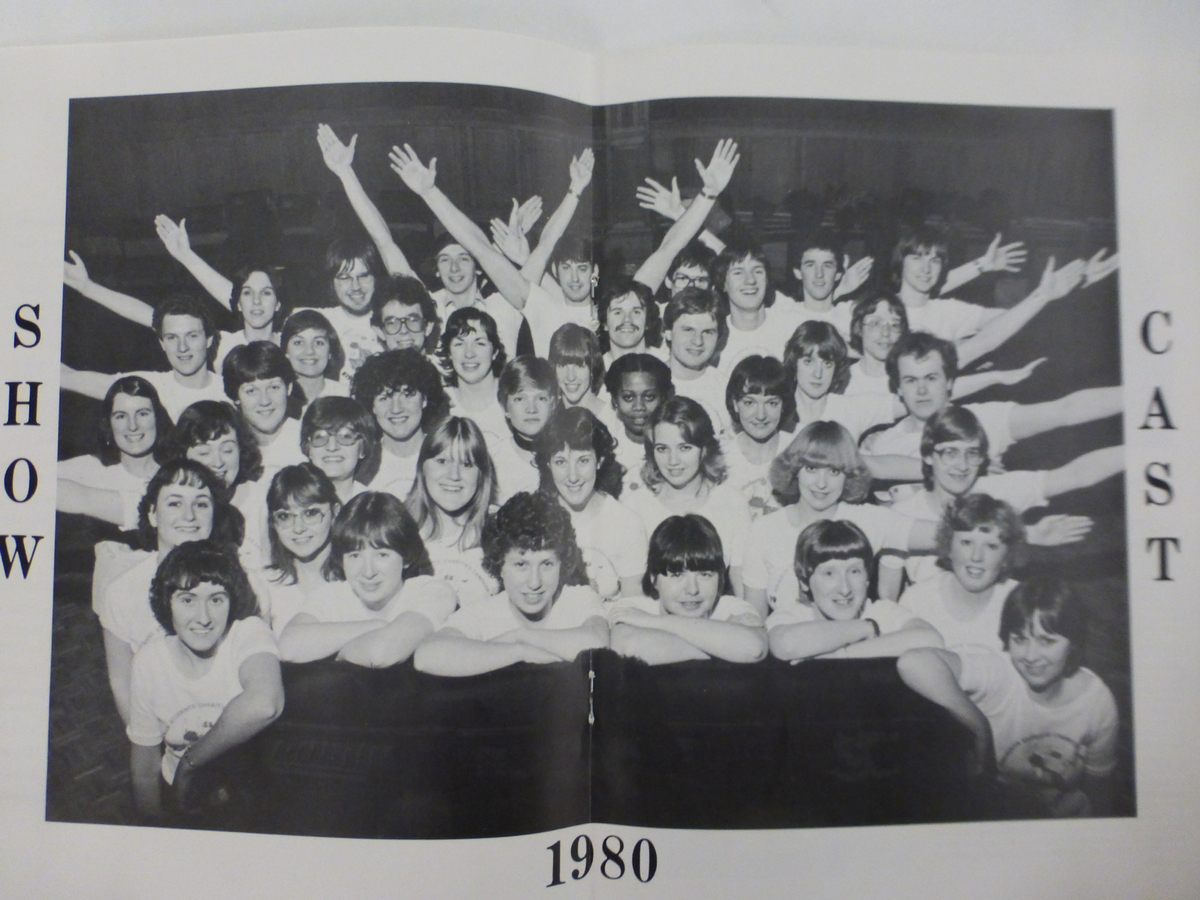 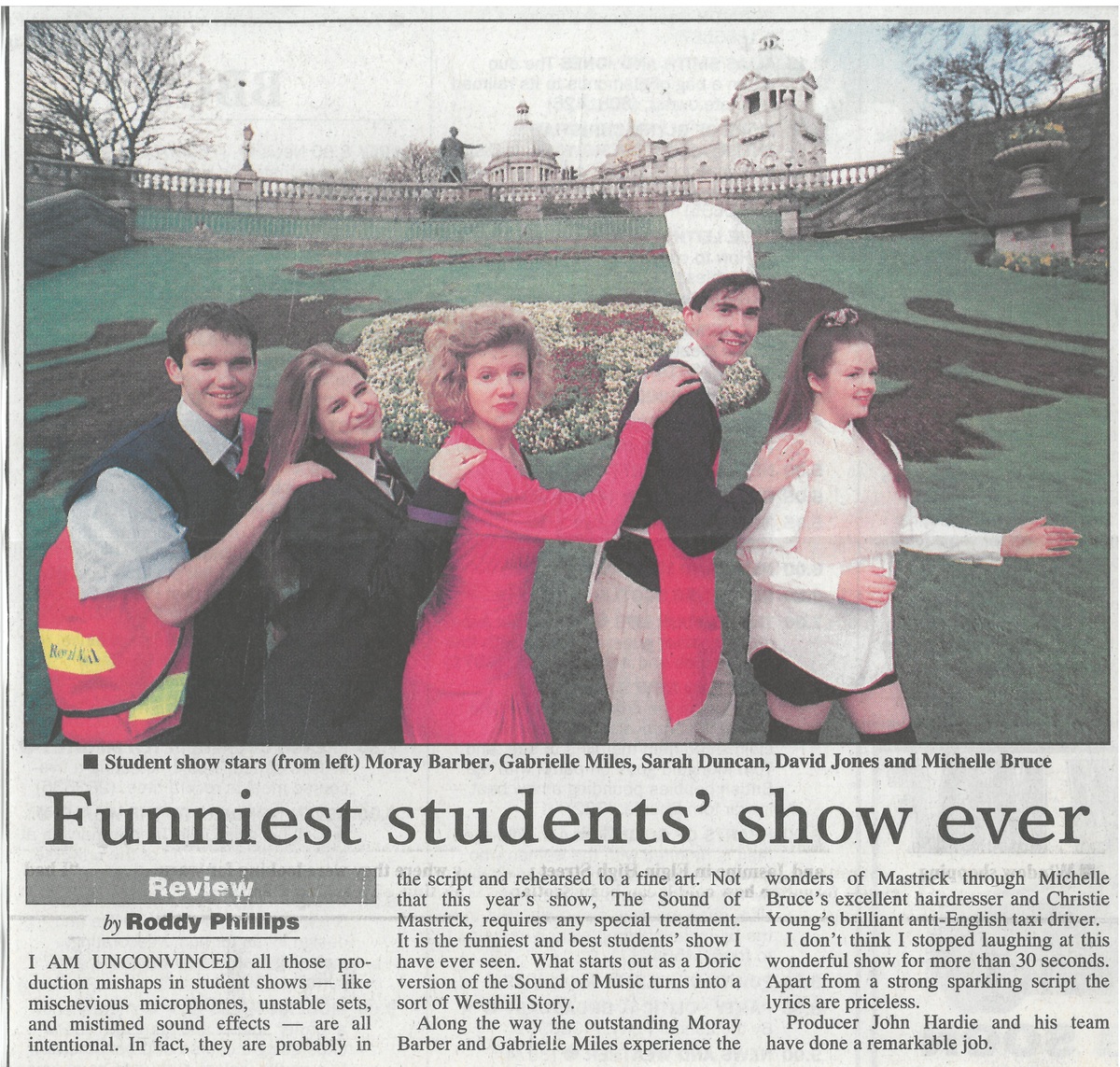 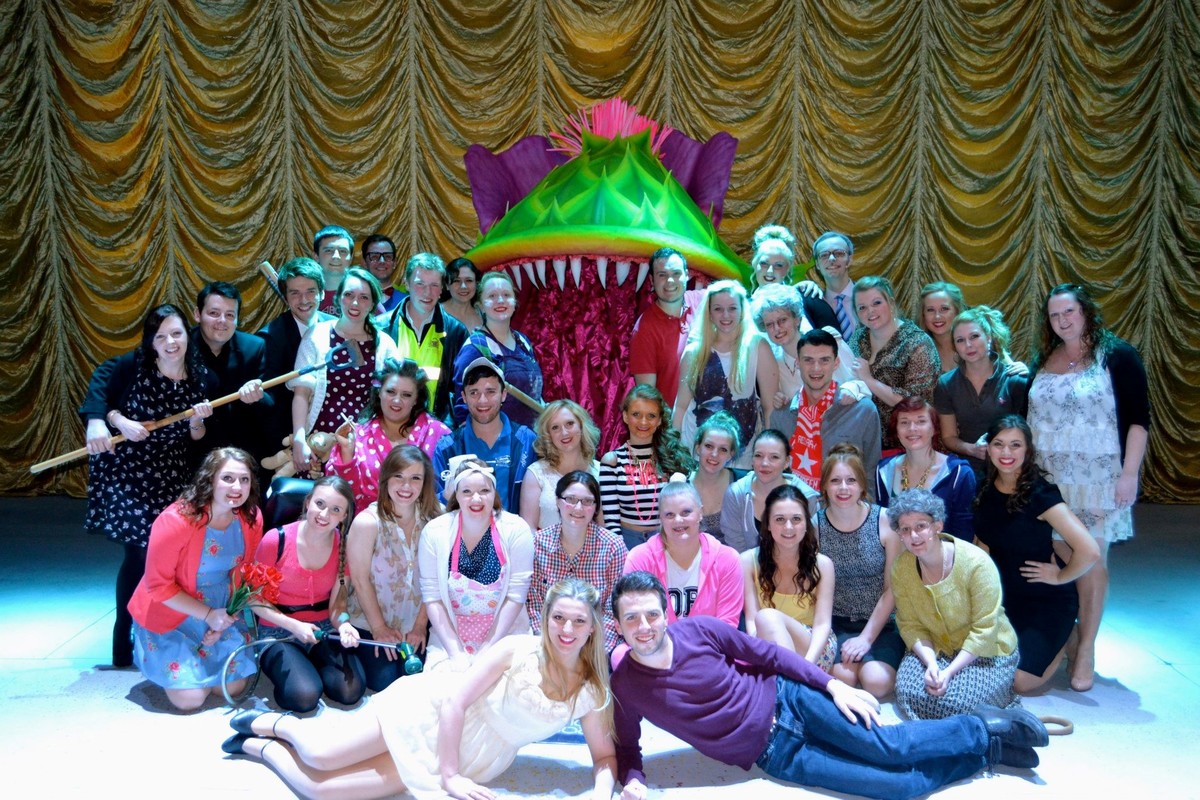 The cast of Spital Shop of Horrors, 2013 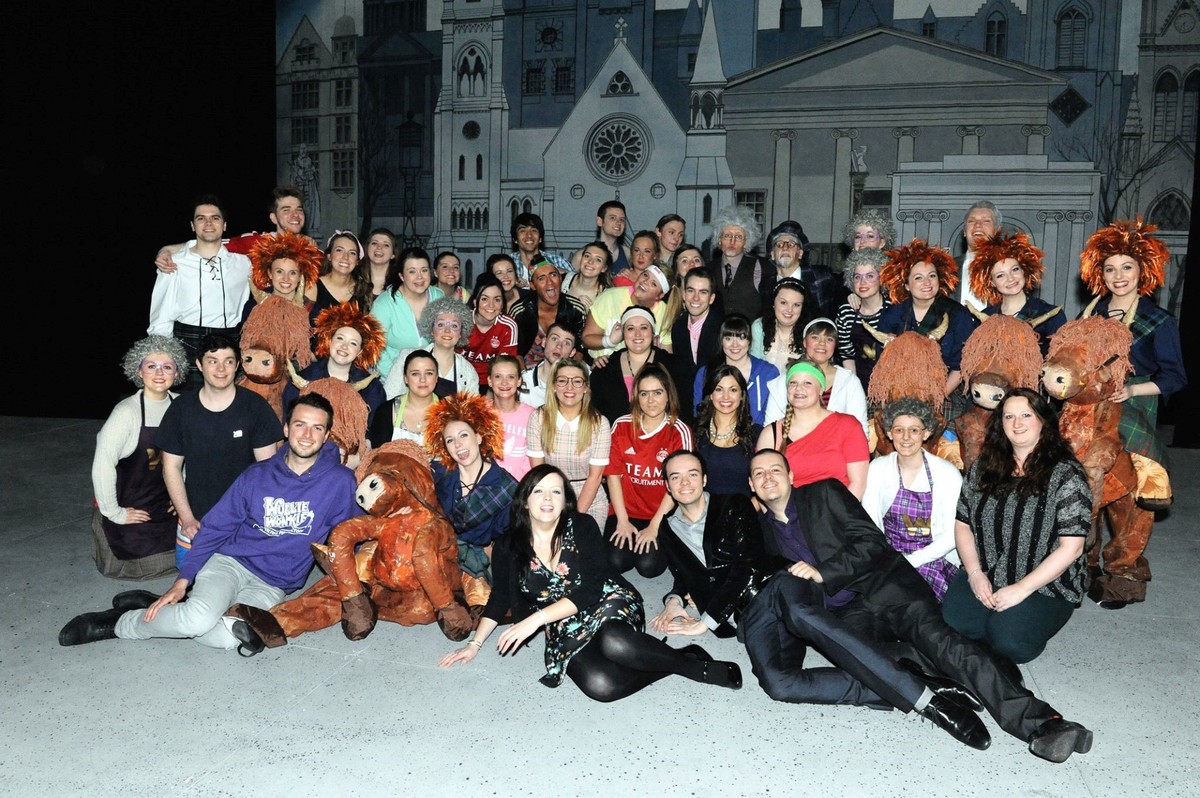 The cast of Wullie Wonkie and the Fine Piece Factory, 2014