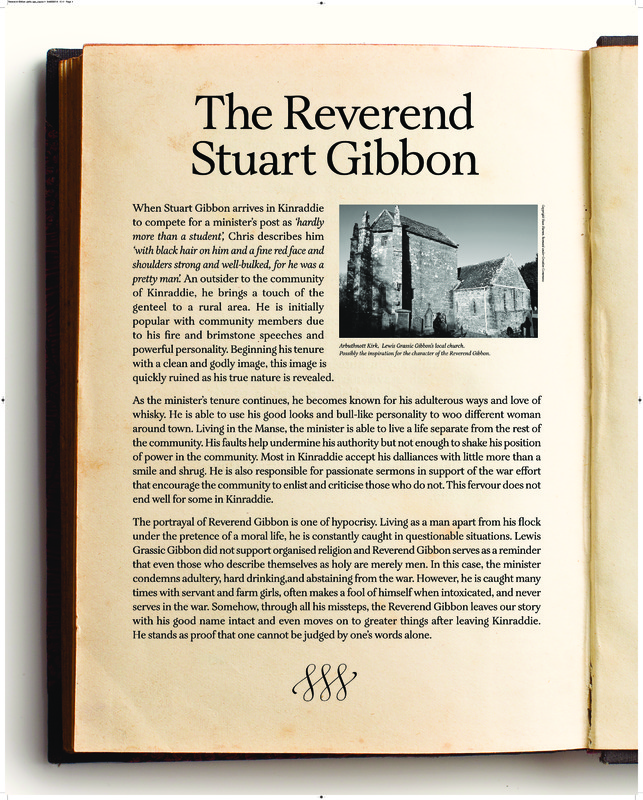 When Stuart Gibbon arrives in Kinraddie to compete for a minister's post as 'hardly more than a student', Chris describes him 'with black hair on him and a fine red face and shoulers strong and well-bulked, for he was a pretty man.' An outsider to the community of Kinraddie, he brings a touch of the genteel to a rural area. He is initially popular with community members due to his fire and brimstone speeches and powerful personality. Beginning his tenure with a clean and godly image, this image ifquickly ruined as his true nature is revealed.

As the minister's tenure continues, he becomes know for his adulterous ways and love of whisky. He is able to use his good looks and bull-like personality to woo different women around town. Living in the Manse, the minister is able to live a life separate from the rest of the community. His faults help undermine his authority but not enough to shake his position of power in the community. Most in Kinraddie accept his dalliances with little more than a smile and shrug. He is also responsible for passionate sermons in support of the war effort that encourage the community to enlist and criticise those who do not. This fervour does not end well for some in Kinraddie.

The portrayal of Reverend Gibbon is one of hypocrisy. Living as a man apart from hi flock under the pretence of a moral life, he is constantly caught in questionable situations. Lewis Grassic Gibbon did not support organised religion and Reverend Gibbon serves as a reminder that even those who describe themselves as holy are merely men. In this case, the minister condemns adultery, hard drinking, and abstaining from the war. However, he is caught many times with servant and farm girls, often makes a fool of himself when intoxicated, and never serves in the war. Somehow, through all his missteps, the Reverend Gibbon leaves our story with hid good name intact and even moves on the greater things after leaving Kinraddie. He stands as proof that one cannot be judged by one's words alone. 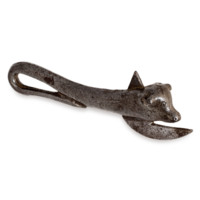 Kinraddie’s church minister is a man of means and able to purchase tinned food that others could not afford. He would have needed a tin opener such as this one in the shape of a bull. His wealth sets him apart from the community, though it is a distinction accepted and encouraged by the community. Responsibility and power comes with this position, but the Reverend Gibbon abuses this to achieve his own ends. 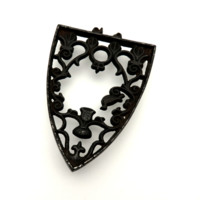 Having a presentable  appearance is an important way of showing leadership. Irons were used in most households, if only to prepare neat clothing for Sunday services. However, in a house such as the Manse, neither the minister nor his wife would do the ironing themselves. The servant girl who did the ironing may have been the one with whom the minister is found in a compromising situation in the kirkyard one evening. 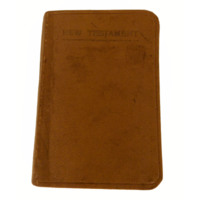 Rural community life often revolved around Sunday service. The minister gained his status from his role of interpreting the Bible. Reverend Gibbon uses the Bible’s texts to condemn those who protest against the First World War, and his words turn much of the community against Long Rob who has chosen not to enlist as a soldier. This abuse of power goes unchecked and has dire consequences for Long Rob. 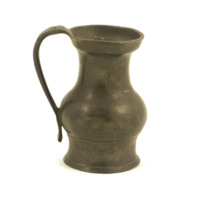 This measure was used in church for communion and, ironically, previously in a pub as a serving jug. Its dual purpose reflects the conflicting natures of the Reverend Gibbon as a man of God and as an alcoholic. How does a community cope when their supposed moral leader is the one who does not follow the rules? 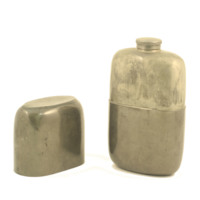 The Reverend Gibbon is often found drunk and in embarrassing situations, from an incident on the train to his activities with the local ladies. Other members of the community also drink or even get drunk, but it is the minister who continually steps out of line. However, the community seems to accept the Reverend Gibbon’s drinking with a laugh and his reputation consistently remains intact.