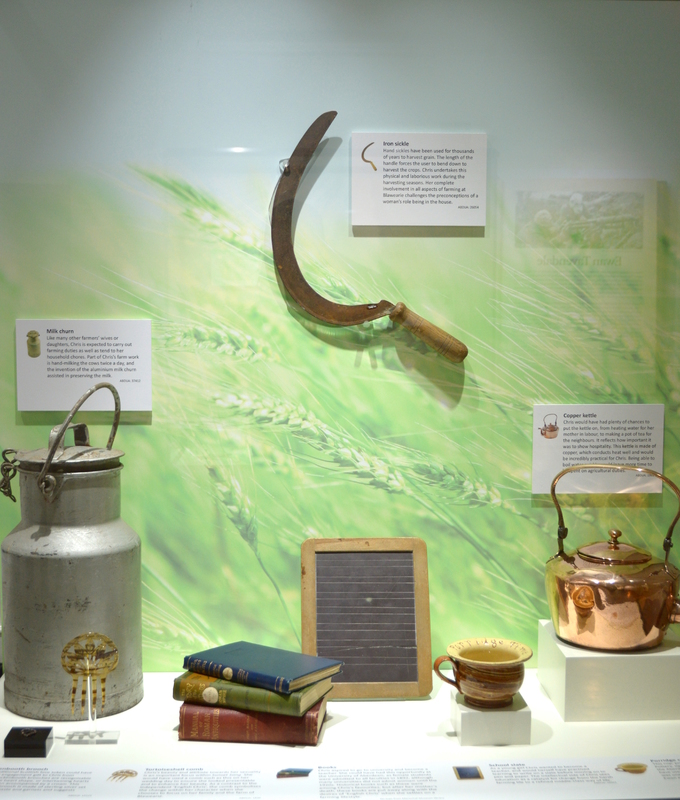 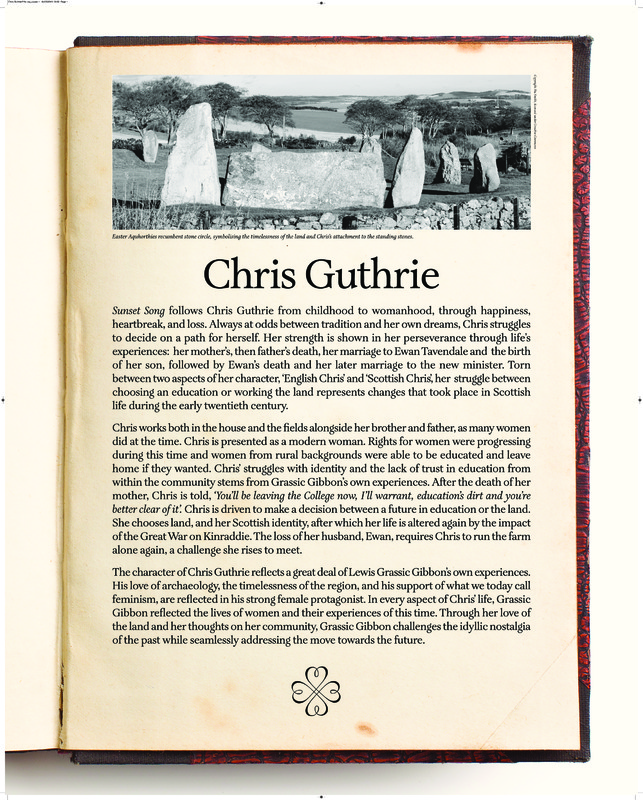 Sunset Song follows Chris Guthrie from childhood to womanhood, through happiness, heartbreak, and loss. Always at odds between tradition and her own dreams, Chris struggles to decide on a path for herself. Her strength is shown in her perseverance through lifes experiences:  her mother’s, then father’s death, her marriage to Ewan Tavendale and  the birth of her son, followed by Ewan’s death and her later marriage to the new reverend. Torn between two aspects of her character, ‘English Chris’ and ‘Scottish Chris’, her  struggle between choosing an education or working the land represents changes that took place in Scottish life during the early twentieth century.

Chris works both in the house and the fields alongside her brother and father, as many women did at the time. Chris is presented as a modern woman. Rights for women were progressing during this time and women from rural backgrounds were able to be educated and leave home if they wanted. Chris’ struggles with identity and the lack of trust in education from within the community stems from Grassic Gibbon’s own experiences. After the death of her mother, Chris is told, ‘You’ll be leaving the College now, I’ll warrant, education’s dirt and you’re better clear of it’. Chris is driven to make a decision between a future in education or the land. She chooses land, and her Scottish identity, after which her life is altered again by the impact of the Great War on Kinraddie. The loss of her husband, Ewan, requires Chris to run the farm alone again, a challenge she rises to meet.

The character of Chris Guthrie reflects a great deal of Lewis Grassic Gibbon’s own experiences. His love of archaeology, the timelessness of the region, and his support of what we today call feminism, are reflected in his strong female protagonist. In every aspect of Chris’ life, Grassic Gibbon reflected the lives of women and their experiences of this time. Through her love of the land and her thoughts on her community, Grassic Gibbon challenges the idyllic nostalgia of the past while seamlessly addressing the move towards the future. 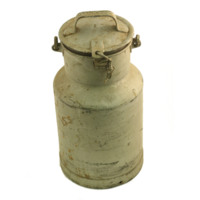 Like many other farmers’ wives or daughters, Chris is expected to carry out farming duties as well as tend to her household chores. Part of Chris’s farm work is hand milking the cows twice a day and the invention of the aluminium milk churn assisted in preserving the milk. 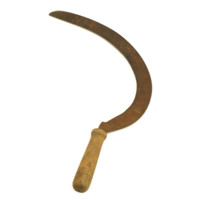 Hand sickles have been used for thousands of years to harvest grain. The length of the handle forces the user to kneel or squat. Chris undertakes this physical and laborious work during the harvesting seasons. Her complete involvement in all aspects of farming at Blawearie challenges the preconceptions of a women’s role being in the house. 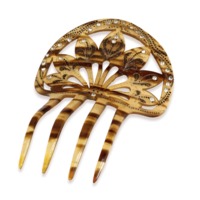 Chris’s beauty and attitude towards her sexuality is a large focus within Sunset Song. She would have used a comb such as this on her wedding day to ensure she looked presentable and to enhance her beauty. As a contrast to the independent ‘English Chris’, the comb symbolises the change within her character, when she chooses to focus on her family and the farm of Blawearie. 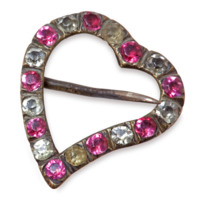 This traditional Scottish love token could have been given to Chris by Ewan as a gift for their engagement. Luckenbooth brooches can be recognised by the heart shape, or intertwining hearts motif, often accompanied by a crown. This particular brooch is made of sterling silver set with garnets and suggests femininity. 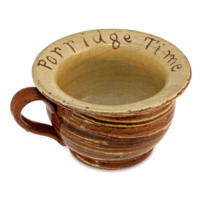 This cup, produced in Aberdeen by the Seaton Pottery, signifies the importance of porridge in the Aberdeenshire farmer’s diet. Chris would use a similar cup, as preparing porridge was one of her duties as a wife. Chris and Ewan enjoy a cup of porridge on a daily basis. 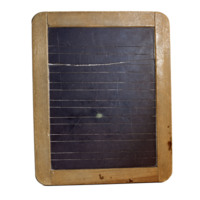 As a young girl Chris wanted to become a teacher,, and would herself have practiced learning to write on a slate before moving on to pen and paper. The intellectual side of Chris sees education as a catalyst for change from the harsh farming life to a refined middle-class way of life. 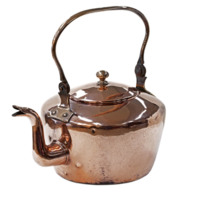 Chris would have had plenty of chances to put the kettle on, from heating water for her mother in labour, to making a pot of tea for the neighbours. It reflects how important it was to show hospitality. This kettle is made of copper, which conducts heat well and would be incredibly practical for Chris. Being able to boil water quickly would leave more time to be spent on agricultural duties.