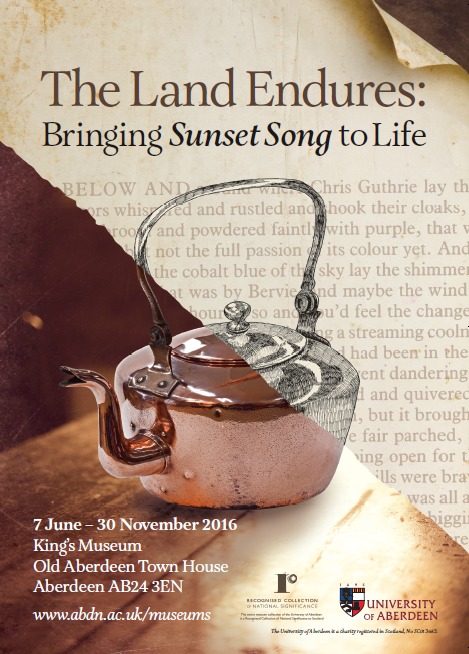 This co-curated student exhibition is our interpretation of Lewis Grassic Gibbon’s classic novel, Sunset Song, published in 1932. The story portrays rural life twenty years earlier, before and during the First World War. Just as Grassic Gibbon did, we will explore realistic representations of life in North East Scotland at the beginning of the twentieth century. Grassic Gibbon set out to challenge the romanticised ‘kailyard perspective’ of rural communities as idyllic and without difficulties. This exhibition presents difficult subjects such as suicide, rape, and abuse, as they are encountered in the story of Sunset Song, alongside some of the positive aspects of rural life.

Revolving around the fictional rural community of Kinraddie in Aberdeenshire, Sunset Song follows a female character, Chris Guthrie, through her coming of age story. The characters portrayed in this exhibition will encourage you to step back in time, and consider what life was like for people in places like Kinraddie.

Those who have read the book, or seen one of the movie or theatrical adaptations, will recognise the theme of a connection with the land and between those who care for it. We chose to make this the backbone of the exhibition, as it is in the novel. This allows us to explore many other themes such as community, the roles of women, and the impact of the First World War. The land is also that which connects the community.

Like his characters, Lewis Grassic Gibbon was born in Aberdeenshire and raised in a small rural community in the Mearns. A successful journalist turned professional writer after marrying, his first literary success came from his publication of Sunset Song. Soon after, he finished the other two stories that make up A Scots Quair trilogy. Many of his own experiences helped to shape his characters and are reflected either through symbolism or in his characters’ beliefs. Even after his death, the most beloved of his stories lives on.