This contemporary engraving shows James Douglas, Duke of Queensberry and Dover (1662-1711) presenting the Act of Union to Queen Anne.

By 1700 there was widespread paranoia in England and Scotland over the possibility of a French prince succeeding to the Spanish crown.

Meanwhile, Queen Anne, who succeeded William of Orange to the throne in 1702, had no living heir. The threat of Catholic union in Europe and uncertainty over the royal succession forced a reconsideration of the existing links between Scotland and England. Negotiations between the two kingdoms failed in 1702-3, deepening the sense of crisis. In 1703-4 the Scottish parliament declared that in future it would control foreign policy and the choice of Scotland's monarch. At this point English politicians, who had previously been indifferent to the prospect of Anglo-Scottish unity, became convinced of the need for union to protect her northern border, and prevent any Stuart return to the Scottish throne. They used the threat of an economic embargo and invasion to persuade a majority of Scottish parliamentarians to accept a negotiated union in 1706-7. 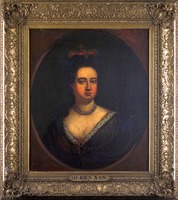 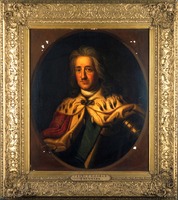 Portrait of George, Prince of Denmark

This painting is reputedly copied by the Edinburgh-based artist, Anne Forbes, after an original by Godfrey Kneller.

The failure of Queen Anne and her consort, George, Prince of Denmark to produce a living heir was one of the underlying causes of the Anglo-Scottish Union. Anne was the second daughter of King James VII and II and, unlike her father, was a committed Protestant. Her marriage to George produced no less than seventeen pregnancies; however only one child, William, duke of Gloucester lived for any length of time. His death in July 1700 from smallpox meant there was no Protestant heir to succeed Anne in the event of her death. The English parliament's apprehensive response was the 1701 Act of Settlement which decreed that, upon the death of the queen, the throne would pass to a Protestant German dynasty, the Hanoverians. The Edinburgh parliament's refusal to accept the Act prompted Anne and her English and Scottish ministers to push for a full incorporating union.

George did not long survive the creation of Great Britain, dying in 1708. Anne lived on through the turbulent first years of the new Anglo-Scottish settlement. Her death in 1714 heralded the arrival of the Hanoverians.

← Protestant Parliaments & Unions
The Debate over Union →
The Union of 1707