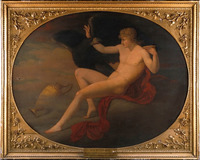 Ganymede by James Irvine of Drum, 1787

Ganymede, in classical mythology, was a shepherd carried to Olympus by an eagle to be cup-bearer to Jupiter. This canvas, by the painter and art-dealer James Irvine of Drum, younger son of a staunchly-Jacobite Aberdeenshire family, was shown at the Royal Academy in London in 1787. The subject carries a particular meaning within the circles of virtuosi at Rome, many of whom were discreetly homosexual. A bas-relief of Ganymede is prominent in the background of a conversation-piece painted by Franciszek Smuglewicz in 1767, showing James Byres with members of his household, including his partner Christopher Norton. 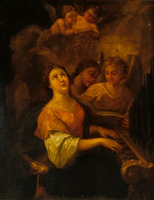 Cosmo Alexander (1724-1772) was an Aberdonian painter, who lived his life in the Jacobite and Catholic communities, so much so that he had to go into Roman exile after the rising of 1745. He studied in Livorno and Paris in 1751-52 before returning to live in London (in a house inherited from the architect James Gibbs) with frequent visits to Scotland. The S. Cecilia must have been painted in the mid 1750s, very much in the style which Alexander had learned in Rome, and donated to the Aberdeen Musical Society in 1757.