James Byres, son of the Jacobite and Catholic Patrick Byres of Tonley, was taken to the Continent by his parents when they fled Scotland after the failed Rising of 1745.

By 1758, Byres was studying painting in Rome but, by 1768, he had been elected to the Roman artists' guild, the Accademia di San Luca, not as a painter but as an architect. From the early 1760s he was one of the leading figures in the aesthetic world of Rome as experienced by the 'grand tourist'.

Byres acted as an antiquarian guide, most notably to the historian Edward Gibbon, as an agent introducing potential patrons to painters, and dealing in such fine paintings as Poussin's Seven Sacraments, now in the National Gallery of Scotland, and such notable objects as the Portland Vase now in the British Museum.

In Rome he lived in some state in the Strada Paolina with a household which included at various times his parents and nephew and his partner Christopher Norton (c.1740-99) as well as his fellow-painter and antiquary Colin Morison. Byres returned to Scotland in 1790 and lived out a long retirement on his Aberdeenshire estates. Throughout his career he made fine architectural designs, few of which were executed, with the exception of the superb classical mausoleum which he designed for his neighbour Miss Fraser of Castle Fraser. 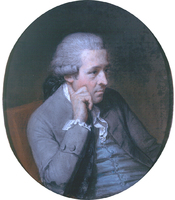 This portrait of Byres was painted at Rome by Hugh Douglas Hamilton (1740-1808) an Irish artist who lived in Italy from 1782-91. Hamilton also painted a companion portrait of Christopher Norton, which hung in Byres's Roman apartment. Hamilton moved in Jacobite circles and painted portraits of the sons of James VIII and III, Henry Benedict and Charles Edward, and of his granddaughter the Duchess of Albany. 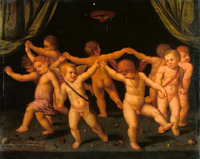 This group of cherubs, painted in a style reminiscent of wall-paintings after the antique at the Palazzo Caetani by Taddeo Zuccari (1529-1566) or Cornelius van Cleve (1520-1567/9), may well have passed through Byres's hands as a dealer. A label on the reverse records his somewhat optimistic attribution of the panel to Raphael. 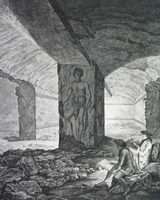 The subterranean Etruscan tombs at Corneto had been known since the early eighteenth century, but interest in them was revived by etchings of their wall-paintings published by Byres's associate Piranesi in 1765. Byres visited them in 1766, and drafted a history of the Etruscans. Byres's recording of the elegant paintings from these tombs parallels the internationally-influential recovery of Roman wall-decorations from the excavations at Pompeii and Herculaneum. Byres had planned the publication of this work in 1792, but the etched copperplates were detained for the duration of the Napoleonic wars at Livorno in packing cases with other effects of Byres's nephew's until 1817. They were finally printed posthumously in 1842 as Hypogaei, or sepulchral caverns of Tarquinia the capital of Etruria.

Byres was fascinated by the achievements of these 'first people of Italy' and regarded their subjugation by the Romans as barbaric. It is not unlikely, given the eighteenth-century taste for drawing contemporary parallels with ancient history, that Byres thought of the Etruscans as comparable to the Jacobite Scots.

The leading engraver of Rome was Giovanni Battista Piranesi (1720-1778). Between 1748 and 1774, he produced quantities of magnificent etchings of Roman antiquities and monuments, which were immensely popular with 'grand tourists'. He was associated both with James Byres and with the Scottish Architect Robert Adam. Throughout his Roman career, Byres promoted Piranesi's prints of monuments and antiquities, and they were associated together in more than one excavation of an ancient site. His late works include plates of excavated antiquities many of which are dedicated to eminent virtuosi and travellers, such as this example from his late sequence of vases, urns and candelabra dedicated to Byres in recognition of their friendship and business association. 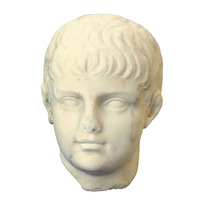 A popular genre of painting in the eighteenth century was the capriccio or architectural fantasy. This example by Canaletto shows an imaginary Roman view down towards the pyramid of Caius Cestius, in whose shadow lies the Protestant cemetery in Rome, resting place of many northerners who died on their travels. 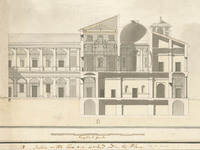 These five drawings for a rebuilding of King's College, Aberdeen, in the manner of a Roman Palace, were undertaken by Byres in 1767. The main influence is Borromini's: his buildings for the Roman University, the Sapienza, and his library for the Oratorians at the Chiesa Nuova.

Byres's plan would have clothed the inner quadrangle at King's with two storey cloisters and would have concealed the crown spire behind a palace front, with a block advancing to the street-line of the High Street. One of the sections through Byres's projected front block indicates a library room looking inward to the courtyard, triple height, with two ranges of galleries, ornamented with a statue of Atlas bearing the world. A large and magnificent room with a dome is allowed for a museum, on the scale of the Tribuna of the Uffizi in Florence.

Byres's associate Colin Morison, a graduate of Marischal College, intended that his substantial collection of 300 Italian paintings 'of all the great Italian masters, from the invention of oil-painting down to the perfection of the art by Raphael' to come to King's College. Had this happened, it would have formed one of the earliest public picture-galleries in Britain, contemporary with the Dulwich Picture Gallery. Morison's collection was seized by the French forces in Rome as enemy property, after his death in 1810, and was dispersed. His and Byres's ambitions for Aberdeen may, however, explain the sumptuous museum room which is at the centre of these plans.