For over 300 years, enslaved Africans were forced to work for Europeans. In the Caribbean, many laboured on sugar, coffee and cocoa plantations owned by North East Scots. 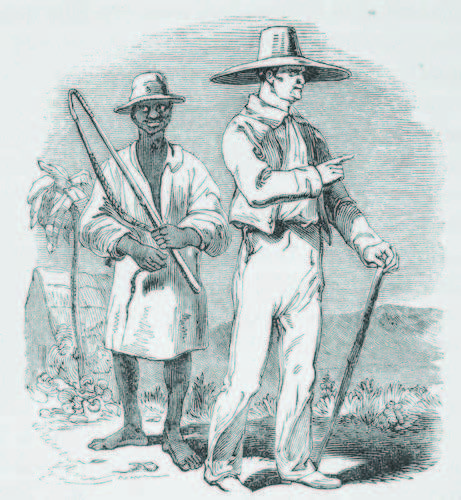 Authority on a plantation – a European overseer and his driver, a trusted slave who enforced his master’s orders with a fearsome whip.

Generations were born into this slavery. Millions died young because of poor diet, cruelty and relentless hard labour. The survivors lacked the most basic freedoms, such as the right to care for and protect family members.

Many sugar labourers were women. A girl began work around age four, collecting grass to feed the mules and oxen. By ten she was weeding the cane fields, and by 18 she was planting and harvesting the canes.

By 40 she was worn out, and was sent back to feeding the livestock. If she survived a few years more, she became a nurse to the babies at the labour camp – a new generation of workers that probably included her own grandchildren.

"I have put a few new Negroes upon Georgia Estate out of an Eboe cargo I lately sold myself. They consist of 4 women at £63 each, 1 woman-girl at £61, and four little girls at £59 each."
Charles Gordon’s agent buys nine Ibo women from Nigeria for his Jamaican estate, 1789 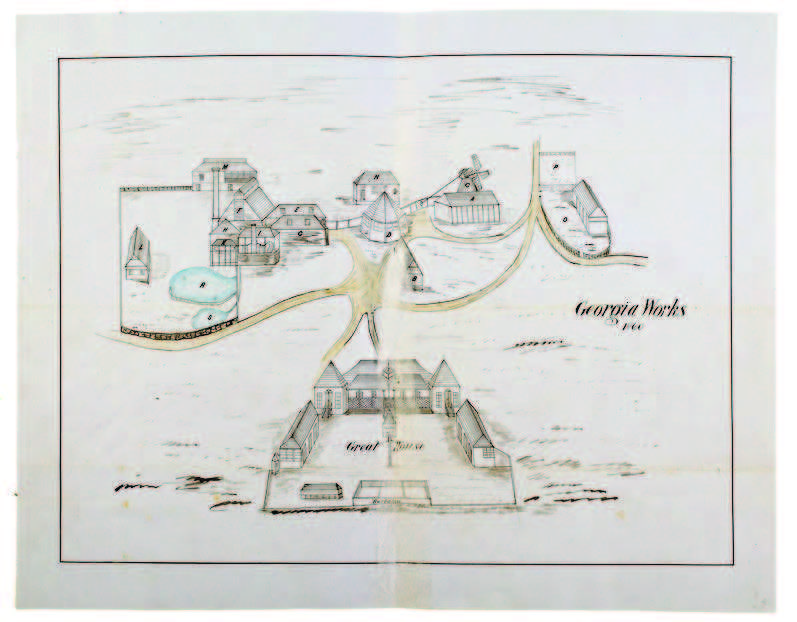 Plan of works and great house on Georgia Estate, 1860. (© The University of Aberdeen) 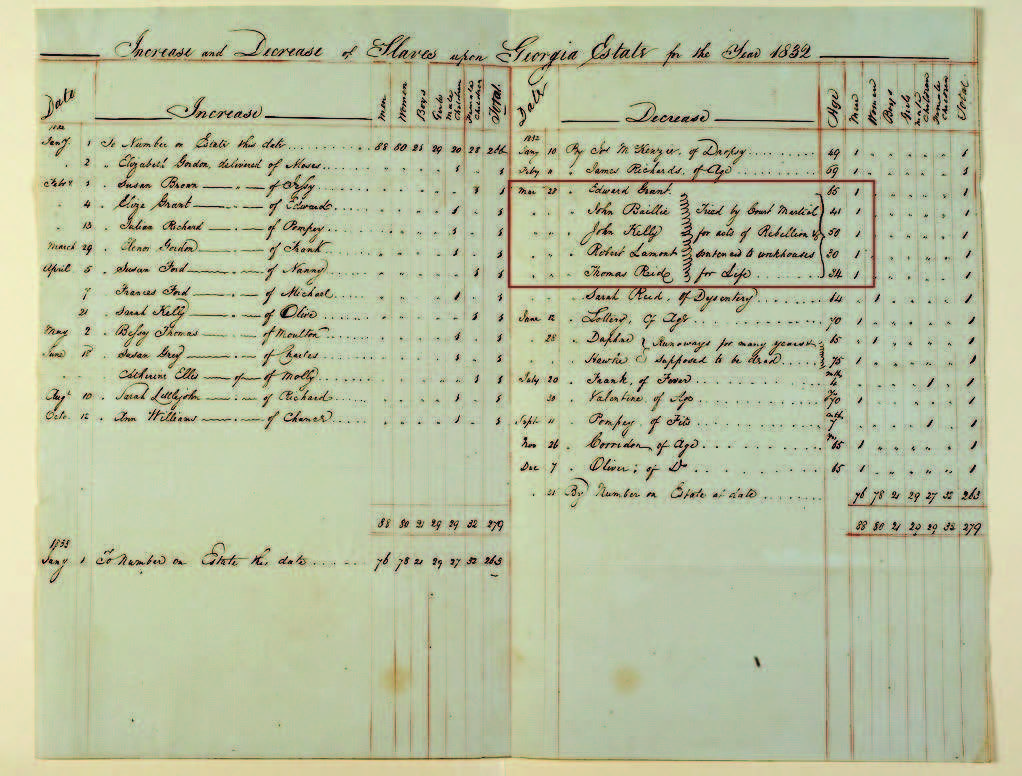 This was the life lived by an enslaved person with a relatively mild owner, such as Thomas Gordon of Buthlaw and Cairness. In 1796 he inherited Georgia Estate in Jamaica with over 200 enslaved people. He disliked slavery, but he was not prepared to free his workers. Instead he tried to be a kind, sympathetic master.

But Gordon’s workers wanted freedom, not kindness. Many joined in the big Jamaican uprising of 1831–2, including five men who were punished by life in prison.

"In the Negro Hospital the complaints are principally pain in loins and head from burdens on the head - enough to kill the strongest animals up hills and down hill."
Jonathan Troup attends to enslaved people injured by overwork in Dominica, 1789

A sugar plantation required many skilled workers, such as carpenters, coopers, sugar boilers, millwrights and blacksmiths. 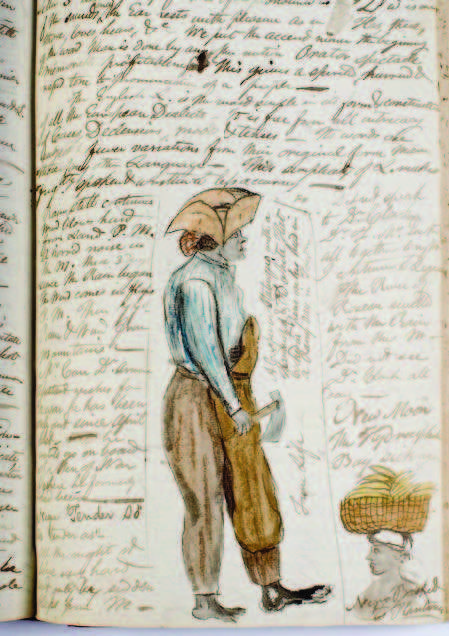 A cooper in the town of Roseau, Dominica, drawn by Jonathan Troup, 1789. (© The University of Aberdeen) 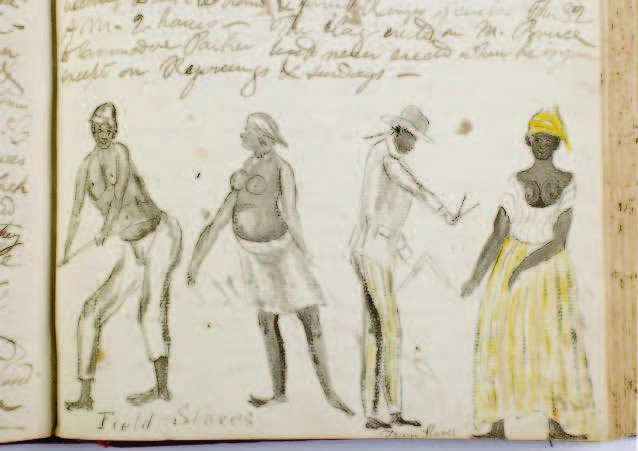 Field slaves and town slaves in Dominica, drawn by Jonathan Troup, 1789. (© The University of Aberdeen)

These skills were taught to enslaved men, not women. With such a skill, an enslaved man could often earn money for himself by working on his day off – usually a Sunday. Some even managed to earn enough to buy their freedom.

There were fewer opportunities for enslaved women to learn a skill. Some were employed as domestic servants and learned laundering and sewing, but these jobs were usually reserved for mixed-race girls – often the illegitimate daughters of European planters or overseers. Most African women worked as field labourers. They could only earn money by selling vegetables that they cultivated on Sundays on plots of waste land.

Remarkably, some of these resourceful women saved the large sums of money needed to buy their freedom. But their enslavers rarely agreed to release them when they were still of child-bearing age and capable of producing children who would also be enslaved labourers.

It was in the enslavers’ financial interests to look after the people they enslaved, but nonetheless many inflicted high levels of violence on their workers. 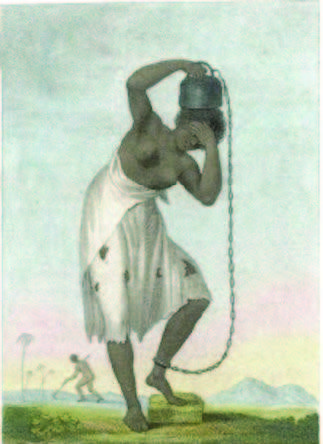 An enslaved woman is chained to a massive iron weight, a punishment witnessed by John Gabriel Stedman in Suriname in the 1780s. (Courtesy of the John Carter Brown Library)

Enslaved people were routinely beaten for minor faults, such as failing to dig enough cane holes or collect enough grass. Those who left the plantation without permission, even just to visit family members elsewhere, were confined in stocks, shackled or weighted down with iron. Those who repeatedly broke labour camp rules or challenged the slave owner’s authority were flogged mercilessly with a long cart whip that tore the skin from their backs and buttocks. These punishments were inflicted on both men and women, including pregnant women. There are many accounts of enslaved women miscarrying after being beaten.

Generally enslavers did not wish to kill their labourers and the punishments were usually meant to stop short of inflicting death. Deaths did happen, however, as many enslaved people were too weak from overwork and poor nutrition to recover from severe beatings.

The most serious punishment was execution, usually by hanging. This was restricted to those who killed Europeans or who fought for their freedom. After they were dead, it was a common practice to cut off their heads and display them publicly as a warning to others to obey their enslavers.

Many visitors to the Caribbean were shocked at the violence. But the enslavers justified it by claiming that Africans did not feel pain like Europeans or that they only understood orders inflicted with a whip. In reality, the violence was driven by fear. Slavers were far outnumbered by the people they enslaved, and they lived in daily fear of uprisings. The violence was an attempt to terrify their workers into submission.

For anti-slavery campaigners the violence was one of the worst aspects of slavery. It was proof, they argued, that the practice of enslavement turned men into monsters.

Thomas Gordon (1788–1841) was the son of Charles Gordon, 7th of Buthlaw and 1st of Cairness, and his wife Christian Forbes. 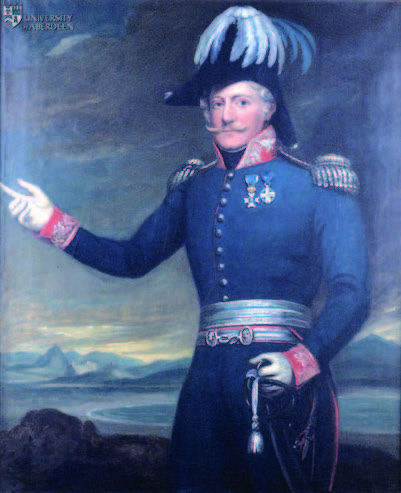 A reluctant slave owner – Thomas Gordon of Cairness, 1836. (© The University of Aberdeen)

Charles Gordon had bought Georgia Estate in Jamaica in about 1778, but the family’s connections with Jamaica predated this. George and James Barclay, the brothers of Charles’ mother, had been doing business in Jamaica since the 1720s.

Charles Gordon visited Jamaica occasionally, but in his lifetime Georgia Estate was mostly managed by another North East Scot, Francis Grant of the Grants of Castle Grant. In the 1790s, income from Georgia enabled Charles Gordon to build one of the finest new houses in the North East, Cairness, near Lonmay. 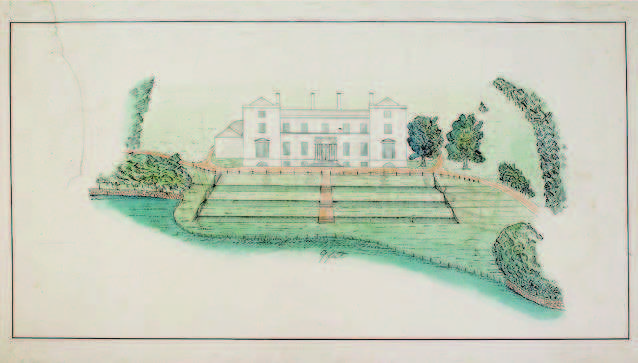 A view of Cairness House, designed for Charles Gordon in the 1790s by the architect James Playfair. (© The University of Aberdeen)

When Thomas inherited the estate he was uneasy about slavery. He was an ardent supporter of Greek independence from Turkish rule, and this interest in freeing people from foreign control sat uncomfortably with his own enslavement of more than 200 people. But he did not risk giving the enslaved people their freedom before anyone else, and those enslaved on Georgia Estate were emancipated at the same time as all others in the British empire, in 1834.