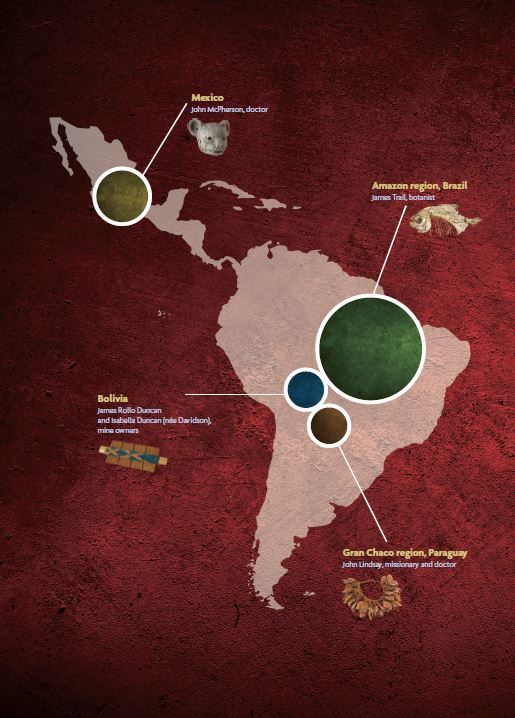 Aberdonians in the Americas: Migrants and adventurers from Mexico to Paraguay

Informal empire
After many Latin American countries fought for and gained their independence from the Spanish
Empire in the early 1800s, people from other countries saw opportunities to pursue their dreams of wealth in a newly accessible region. British commercial companies and individuals explored, traded, worked as missionaries, and ran mines and other industries all over Latin America. Although very little of Latin America was colonised by Britain, this strong influence of British interests is sometimes called ‘informal empire’.

Collectors
This exhibitions displays some of the University’s rich museum collections to explore how the ‘informal empire’ worked through five people who spent parts of their lives in Latin America in the late nineteenth and early twentieth centuries. All met cultures and experiences strikingly different from their lives at home, and collected objects relating to their work and travels. Their stories are complicated and sometimes uncomfortable, but together they are a reminder of the forgotten ties between Aberdeen and the Americas. James Rollo Duncan and Isabella Duncan (née Davidson) were both from poor backgrounds in Aberdeenshire and went to Bolivia to seek their fortunes. They met and married there, and became extremely wealthy through commercial tin mining.