Iron ring, found in 1800 in the ancient camp of Raedykes near Stonehaven, and supposed to have been the hoop of the axle of a Caledonian war chariot used at the battle between Agricola and Calgacus fought near that place Presented by Professor Stuart.

Ornaments, often of a highly visible nature, are often worn as signs of status. Metal or other shiny or colourful materials are often chosen and may complement other markings on the body, such as tatoos, scarification or piercing. This is an anklet from Malawi, in central Africa. It is made of thick brass wire wound in a spiral and is heavy and inflexible. The anklet would have been put on in one action and not taken off, as it is too stiff to unwind. it would have reached well up the lower leg and would have made walking or running difficult. The anklet was worn by a woman as a highly visible symbol of the power and wealth of her husband. 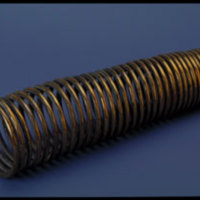