Portrait of Robert Gordon of Straloch by Charles Whyte, 1707.

Hamilton (1743-1829) became Professor of Natural Philosophy at Marischal College in 1779 but switched posts and became Mathematics Professor the following year. Although teaching Mathematics from 1880 the switch was not officially ratified until 1817. The painting likely commemorates his formal appointment. Peterhead based John Moir (1775-1857) was a portrait and occasional landscape painter. Studied in Edinburgh and Italy. He painted a number of portraits of the Gordon family including '4th Duke of Gordon' now in SNPG.

Grub (1812-1892) was Professor of Law Aberdeen 1881-1891 having joined the staff teaching Scots Law and Conveyancing at Marischal College in 1843. George Reid, (1841-1913) trained in Edinburgh, in Holland studying with G.A. Mollinger and J. Israels, and in Paris. Initially a landscape painter he increasingly worked as a portraitist. He is closely associated with John Forbes White, the Aberdeen patron and collector.

Gregory (1638-1675) was born at Drumoak. He graduated from Marischal College in 1657. His first important work was in optics, and by 1663 he had published a book on the subject and had invented the reflecting telescope. Later that year he went to Italy to further his mathematical studies. There he published 2 books on calculus (as it was later known). He returned to Scotland in 1668 and became the first professor of maths at St. Andrews. In 1674 he went to Edinburgh but shortly afterwards his health began to fail and he died the following year. He shares with Newton the credit for the discovery and proof of the general binomial theorem and for the development of the theory of interpolation. Possibly a copy or a duplicate work by Scougall as a portrait of Gregory attributed to John Scougall is in Fyvie Castle (ex 1884 Scot Nat Portraits No494 Artist unknown). This was reputedly in the possession of the Gregory Family since it was painted between 1661-1675. The University work lacks the inscription of the Fyvie painting however the inscription is post mortem.

Gordon, Professor of Medicine at King's College from 1632-38, was active in the university at the time Jamesone is known to have been completing portraits of other Aberdeen academics. The portraits of Arthur Johnstone and James Sandilands both contemporaries of Gordon, are firmly established as Jamesone's work and the artist may well have painted this portrait around the same time. George Jamesone (1590-1644) was a native of Aberdeen and Scotland's first known painter of real merit. Traditionally he is said to have trained in Antwerp, and his work has strong affinities with the Low Countries. 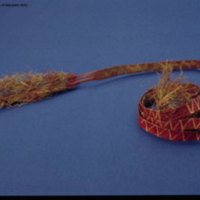