Comb made from a single piece of wood, carved handles, bound with string made from twisted vegetable fibre.

VASE VII. PROCHOOS - maidens drawing water at a fountain (Kallirrhoe); in front of the lion's head whence the fountain issues is rude sketch of Doric fa�ade. The black of this vase has been rudely painted over in modern times.

Combs These were worn in the hair as decoration.

6. Described by its collector as a 'nose instrument'. The putorino was usually played bugle-fashion to summon people together.

9. Worn as a protective amulet. Important 'tikis' were treasured as heirlooms which accumulated the force, 'mana', of their successive owners.

Smoking was a popular pastime from when tobacco was first brought from South America in the 16th century. Pipes were usually made from clay and continued to be so until the end of the 19th century, even though wooden ones were available. Most pipes were plain or only decorated simply. This is an early example of a clay pipe, dating from the later 17th century. It is quite substantial but has a small bowl. It is decorated with a fringe of small vertical incised lines around the rim of the bowl. This is a well-preserved example of an early clay pipe from NE Scotland. Normally they are only preserved in pieces because they are fragile, and because they broke in use they were thrown away.

In Europe about 3000-1700 BC, from the late Neolithic into the Bronze Age, flat-based, finely made pots, known as beakers, were widespread. They have an S- or Z-shaped profile, and are decorated with bands of fine incised geometric pattern. In NE Scotland the Northern beaker types are associated with the introduction of metal working and are often found in individual cist burials, both probably related to settlement of people from Europe. Later beakers were made locally, and often have archaic or idiosyncratic features. This is a Late Northern type with an S-shaped profile and a flaring neck and a very small base with a foot. The fabric is coarse, although the vessel is not heavily made, and the impressed decoration is unevenly applied. There are two bands of lines, cross-hatching, chevrons and fringes around the belly and neck, separated by plain zones. Around the foot runs a continuous large, striped triangular pattern. The beaker was found in a cist at Parkhill, Quarry, Durris, Kincardineshire. Four other cists, with beakers were found at the same location.

This is one of a large number of images of the Stuart dynasty in general in the university collection. These images attest to Stuart Royal patronage of King's College and later to the prolonged Jacobite sympathies of both King's and Marischal Colleges. In particular there are a large number of images, particularly engravings, of Mary, reflecting her role as one of the cast of 'hero' figures from Scottish history in whom much of nineteenth century Scottish identity was invested. This is a photographic reproduction after a painting in the Prince's Chamber in the House of Lords. It is one of a series of 'Tudor Portraits' produced by students of the Royal School of Art, South Kensington. 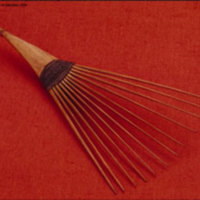