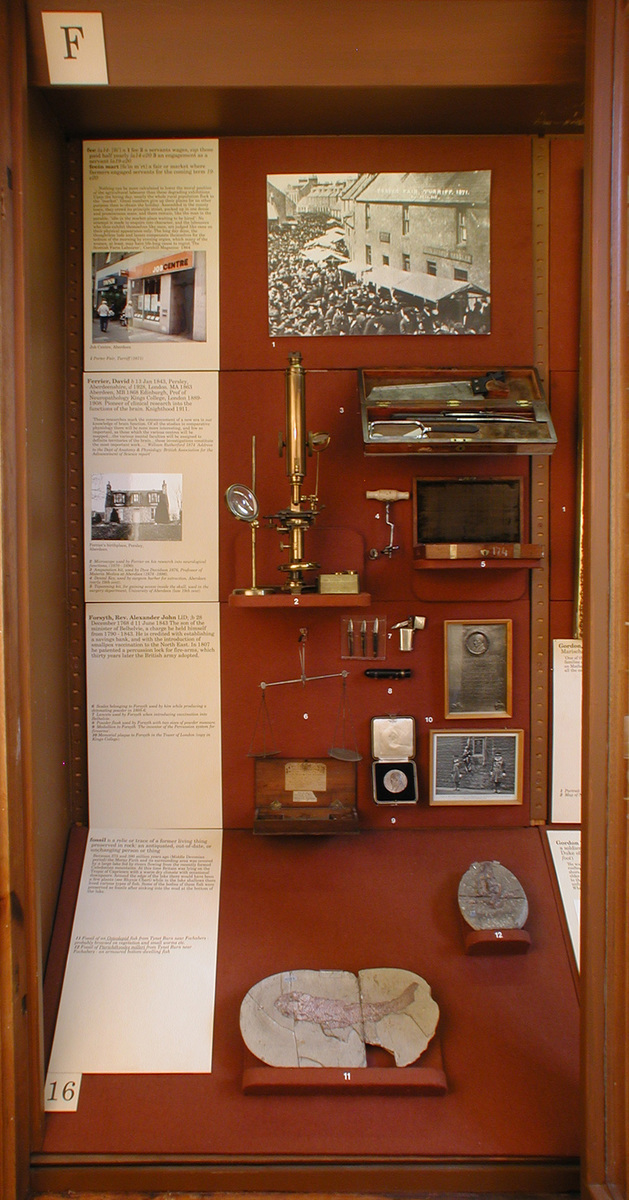 fee la14- n
1 fee
2 a servants wages, esp those paid half yearly la14-e20 3 an engagement as a servant la19-e20
feein mart a fair or market where farmers engaged servants for the coming term 19-e20.

Nothing can be more calculated to lower the moral position of the agricultural labourer than these degrading exhibitions. Upon the hiring day, nearly the whole rural population flock to the market. Great numbers give up their places for no other purpose than to obtain the holiday. Assembled in the county town, they crowd its principle street, packed up in one dense and promiscuous mass, and there remain, like the man in the parable, idle in the market-place waiting to be hired. No attempt is made to enquire into character, and the labourers who thus exhibit themselves like oxen, are judged like oxen on their physical appearance only. The long day done, the thoughtless lads and lasses compensate themselves for the tedium of the morning by evening orgies, which many of the women, at least, may have life-long cause to regret.
The Scottish Farm Labourer, Cornhill Magazine 1864

These researches mark the commencement of a new era in our knowledge of brain function. Of all the studies in comparative physiology there will be none more interesting, and few so important, as those which the various centres will be mapped...the various mental faculties will be assigned to definite territories of the brain...these investigations constitute the most important work...
William Rutherford 1874. Address to the Dept of Anatomy & Physiology: British Association for the Advancement of Science report.

Forsyth, Rev. Alexander John LID
b 28 December 1768 d 11 June 1843
The son of the minister of Belhelvie, a charge he held himself from 1790-1843. He is credited with establishing a savings bank, and with the introduction of smallpox vaccination to the North East. In 1807 he patented a percussion lock for fire-arms, which thirty years later the British army adopted.

fossil n
A relic or trace of a former living thing preserved in rock: an antiquated, out-of-date, or unchanging person or thing.
Between 375 and 390 million years ago (Middle Devonian period) the Moray Firth and its surrounding area was covered by a large lake fed by rivers flowing from the recently formed Caledonian mountains. At this time Britain was lying on the Tropic of Capricorn with a warm dry climate with occasional downpours. Around the edge of the lake there would have been a few plants (see Rhynie Chert) while in the lake shallows there lived various types of fish. Some of the bodies of these fish were preserved as fossils after sinking into the mud at the bottom of the lake.

Fossil of Pterichthyodes milleri from Tynet Burn near Fochabers - an armoured bottom-dwelling fish.

Fossil of an Osteolepid fish from Tynet Burn near Fochabers - probably browsed on vegetation and small worms etc.

Medallion to Forsyth 'The inventor of the Percussion system for firearms'. 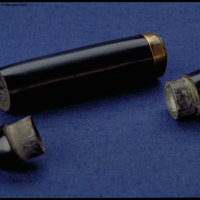 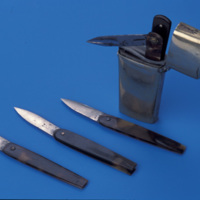 Lancets used by Forsyth when introducing vaccination into Belhelvie. 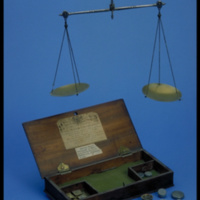 Scales belonging to Forsyth used by him while producing a detonating powder in 1805-6.

Trepanning kit, for gaining access inside the skull, used in the surgery department, University of Aberdeen (late 19th cent).

Microscope used by Ferrier on his research into neurological functions, (1870-1890).

Photograph, framed and glazed, of the plaque to Rev Alexander John Forsyth.