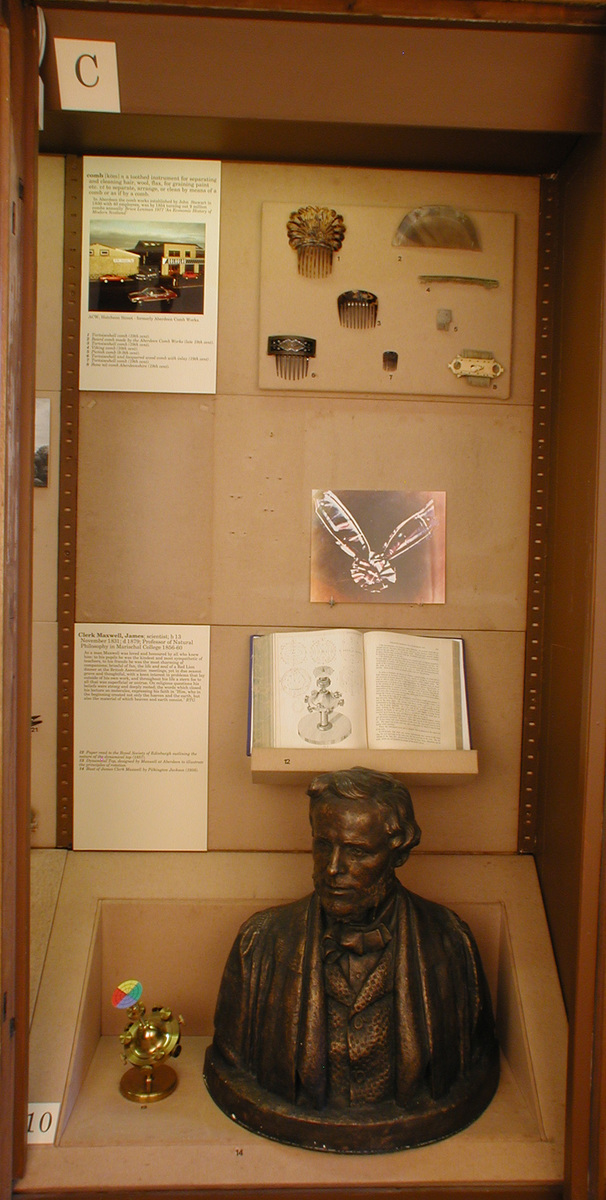 As a man Maxwell was loved and honoured by all who knew him: to his pupils he was the kindest and most sympathetic of teachers, to his friends he was the most charming of companions; brimful of fun, the life and soul of a Red Lion dinner at the British Association meetings, yet in due season grave and thoughtful, with a keen interest in problems that lay outside of his own work, and throughout his life a stern foe to all that was superficial or untrue. On religious questions his beliefs were strong and deeply rooted; the words which closed his lecture on molecules, expressing his faith in him, who in the beginning created not only the haeven and the earth, but also the material of which heaven and earth consist.
RTG Dictionary of National Biography

comb 1 n
A toothed instrument for separating and cleaning hair, wool, flax, for graining paint etc.
2 vt to separate, arrange, or clean by means of a comb or as if by a comb.

In Aberdeen the comb works established by John Stewart in 1830 with 40 employees, was by 1854, turning out 9 million combs annually.
Bruce Lenman 1977.An Economic History of Modern Scotland.

A well known site is the Sculptors Cave, Covesea, on the Moray coast. Besides later deposits of sub-Roman Iron Age and Pictish date, excavations revealed a range of Late Bronze Age pottery, worked bone and metalwork, including armlets and the so-called ring-money. The presence of several jawbones of children aged between six and nine, trodden into the clay floors combines with other evidence for decapitation or the removal of skulls to suggest that the cave was also a focus for ritual activities. These may have involved the display of the heads of children in the entrance area of the cave.
Trevor Cowie 1988 Magic Metal.

Plaster cast of James Clerk Maxwell (cast of the original bronze bust ABDUA: 30110 ) presented by the sculptor's wife to the Department of Natural Philosophy. Plaster copy has been painted with bronze-effect paint.

Dynamical Top, designed by Maxwell at Aberdeen to illustrate the principles of rotation. 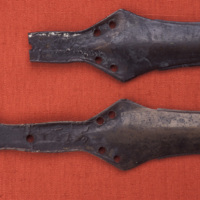 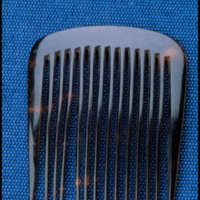 Comb made of tortoise-shell, with inlaid decoration of small circles & large diamonds on the crown. 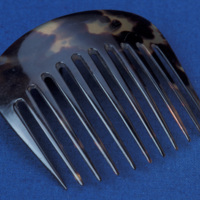 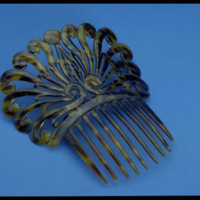